The Blogs
Anat Ghelber
Apply for a Blog
Advertisement
Please note that the posts on The Blogs are contributed by third parties. The opinions, facts and any media content in them are presented solely by the authors, and neither The Times of Israel nor its partners assume any responsibility for them. Please contact us in case of abuse. In case of abuse,
Report this post. 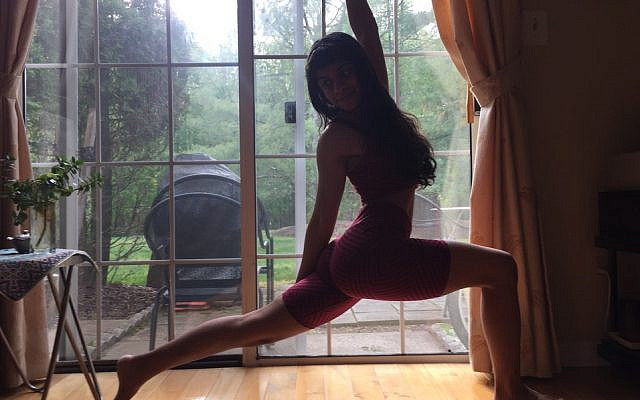 Before I became a yoga teacher, the one individual who inspired me the most was another instructor by the name of Sarah Thomas. She always encouraged me not to lose my Jewish identity while teaching yoga.  She told me that it is vital for teachers to be themselves. She said, “A lot of people try to mimic the Indian culture, but isn’t what yoga is about.”

Sarah Thomas has an entire world to offer to her students. She was born in New Jersey to Indian immigrants.  Although she grew up as an American, she was always attracted to the devoutly Asian part of her culture, which is yoga.  “I started doing yoga because I suffered from an anxiety. I wasn’t allowed to have friends or go out, so yoga was my only outlet.” Teaching herself ways to cope with this anxiety through yoga, Sarah decided to push her talent a bit further. She became a yoga teacher when she was only 17, and now teaches at various studios around New York City.  “My goal in teaching yoga to students is to teach difficult concepts of yoga philosophy.  For example, the idea that we are not the body nor the mind is so difficult to understand just by reading yoga Sutras. So, during my class, I would go though a series of cycles where I tire students a lot, then let them rest for a short while, then tire them again.” “The idea,” Sarah says, “is that you tire the mind so much that you are able to disconnect from the mind and get into a meditative place.”  In her practice, along with yoga, she likes to use performance and poetry in order to help a person dive into a deeper part of themselves.  Sarah Thomas encourages anyone who comes to her, including Holocaust survivors, minorities, etc, to write about their largest, worst nightmares or trauma, and perform them. Afterwards, they do yoga poses to release all the anxiety that occurs in the process of discovering oneself.

A major personal goal for myself is to help others discover their inner peace and get them to a place where they can watch their own mind and body and to be objective with the story they have been telling themselves.  Along with private practice, Sarah Thomas constantly aims to help minorities such as women of color, anyone who is LGBTQ, and Holocaust survivors, through breathing exercises and yoga. As she says, “Anyone can heal and have power.  It’s a matter of finding their own way to dive deep inside of themselves.”

To find out more about Sarah and her work, check out:
www.tomcatyogaandpublishingco.com