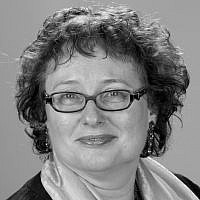 The Blogs
Barbara Kavadias
Apply for a Blog
Advertisement
Please note that the posts on The Blogs are contributed by third parties. The opinions, facts and any media content in them are presented solely by the authors, and neither The Times of Israel nor its partners assume any responsibility for them. Please contact us in case of abuse. In case of abuse,
Report this post.

This Shabbat we begin the book of Deuteronomy, the fifth of the five books of Moses. This parashah, Devarim, is always read before Tishah B’Av, (tisha is ninth, Av is the second to last month in the Hebrew calendar) when we commemorate many terrible things that happened in our history. The most poignant themes of the holy day are related to the commemoration of the destruction of the First and Second Temples in Jerusalem, which occurred on the same day albeit 655 years apart. The Mishnah lists three other events that were said to have occurred on this same date, and later history has added more – including the expulsion of the Jews from Spain in 1492, and the mass deportation of Jews from the Warsaw Ghetto to Treblinka.

Rabbi Gersh Lazarow from Temple Beth Israel in Melbourne, Australia and the Union for Progressive Judaism points out, “While it is true that there have been many who have sought our destruction over the millennia, the most tragic part of our Tisha B’Av [sic] observance is the recognition that most of the loss we mourn was not caused by our detractors, but rather brought about because of what our tradition describes as sinat chinam, the baseless hatred of one Jew toward another.”

Events at the Kotel on Rosh Chodesh are an example of sinat chinam in our lifetime. As women go to pray at dawn each month for Rosh Chodesh, they have been continuously harassed and attacked. After a number of successful court battles led by the Israel Religious Action Center, the police are no longer arresting our sisters who go to pray at the wall, but instead, are seeking to protect them. Oddly enough, the protection this month included putting up barricades, which prevented the women from getting close to the Kotel, and put them in a vulnerable position where they could be surrounded by detractors throwing things at them.

There are attempts being made to bring about peaceful solutions that extend beyond the court battles. At a Jewish Agency for Israel board meeting last year, ARZA (Association of Reform Zionists of America) initiated a resolution that resulted in Prime Minister Netanyahu appointing Natan Sharansky to lead a study to look for a peaceful solution. The Sharansky Proposal, put forward a few months ago, would create two equal sides to the Kotel, one to be governed by those who want to segregate men and women, and one that would be governed by those that allow for egalitarian prayer. While the proposal faces obstacles, it is a solution that the Reform Movement welcomes and believes shows great promise in bringing about a peaceful solution at the Kotel.

In this week’s parashah, Moses was also looking for a peaceful solution to all of the bickering he experienced trying to lead Israel as it wandered the desert. The portion recounts that Moses and Adonai decided to pick leaders from each of the tribes who were “wise, discerning and experienced” and appointed them as leaders in various posts; chiefs of thousands, hundreds, fifties, tens and officials for the tribes.

The Sharansky proposal bears some resemblance to this solution. While we no longer operate as separate tribes in Israel, we are a nation that is pluralistic in practice, though not yet in form. As a Jewish state, religion is integrated into our governance. While strides have been made in gaining recognition for the Reform and Conservative Movements in Israel, the authority in religious matters is solely Orthodox. To have peace in the land, as in the past, we need diversity in how we are governed. Having different authorities for the two sides of the Kotel would be another step forward, joining other steps we have made – getting the right to have land for our congregations, the right to access pre-fab buildings for our congregational buildings, and the right, in theory, if not yet practice, to get salaries paid to our rabbis from the State. Ultimately, what we need in Israel is the ability for rabbis of all streams to able to access the authority needed to perform state-recognized weddings, b’nei mitzvah, b’rit milah, baby namings and more.

While we prepare for the saddest day in the Jewish year, let us all commit to working towards the end of sinat chinam, or baseless hatred between Jews. Promoting pluralism and equal recognition for all streams of Judaism in Israel, as ARZA does on behalf of the Reform Movement, would be a worthy approach for all of us to take.

About the Author
Barbara Kavadias is the Senior Director of Operations & Development of ARZA, the Reform Israel Fund; She is active in her congregation, serving on the ritual committee and as Rosh of its Chevra Kadisha. She is an expert in the business of making the world a better place.
Comments