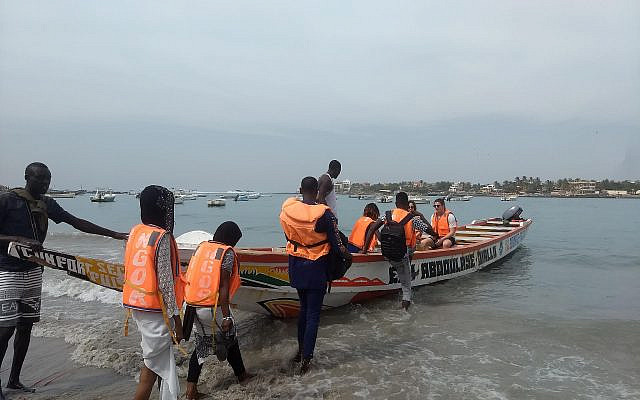 Getting on the boat in Dakar. (Picture courtesy of author.)

We had been on the boat for about five minutes when the engine began to sputter. Within a few moments the roar of the engine was replaced by the eerie silence of the water. The man sitting across from me began to laugh nervously. The young captain, who seemed a bit cocky and self-assured a few moments earlier looked bewildered and frustrated. He began to fiddle with the motor, pulling on a rope to try in vain to restart the engine. The boat began to bob in the water, undulating with the passing waves.

My initial reaction was to laugh. A lot of life here in Senegal doesn’t work out as you would like immediately. We are living in a third world country after all. Even when things go swimmingly well, plans frequently become changed due to a variety of unforeseen circumstances.

After a few minutes, though, I wasn’t so happy anymore. We weren’t so far from shore, I thought to myself. In fact, the entire ride was only supposed to take about 10 minutes. Somebody had told me before that it was a half hour swim. I could do that, I thought to myself. But what about my cell phone in my backpack? Could I swim for a half hour without ruining my phone?

Then I looked at the boat. It was clear that there were people there who couldn’t swim. What was going to happen to them? The sun was setting. How long were they going to spend on the boat? Soon I was supposed to be home to light Chanukah candles with my family. 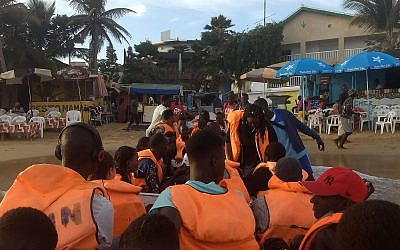 Our boat leaving shore before the engine went out. (Picture courtesy of author.)

All the while the captain and his friend were trying in vain to restart the engine. It would roar for a second and then sputter out. That is when my thoughts turned a bit darker. I knew that I would be okay. We were close to both shores after all, with boats passing us by every minute. But these are the same types of boats that Senegalese and other African migrants have been using to flee the continent in search for a better life in Europe. How many of them have had their engines fail in the middle of the Atlantic Ocean or Mediterranean Sea? We know that thousands of refugees have died at sea in the past decade. These people weren’t all fleeing wars. Many of them were leaving more stable countries like Senegal and Gambia, but are unable to find work there.

While I was a little nervous on my boat, I can only imagine how terrifying it must be to have your boat stop working in the middle of the ocean, when all you want is the opportunity to have a better life and a stable job.

I also felt a new understanding of the story of Jacob’s sons in this week’s parsha. The Torah tells us that there was a massive famine across the entire Middle East. Famously, Joseph helped Pharoah prepare for the famine by saving up grain in advance. When they were starving, the Egyptians turned to Pharoah for food. Jacob and his children however were starving in the Land of Canaan. They, too, had to turn to Egypt for food.

This must have been terrifying. Jacob’s grandfather, Abraham, had also been forced to go to Egypt during a famine, and that did not turn out well. Isaac also contemplated going to Egypt during a different famine, but God told him not to. Now, they would venture to Egypt in order to survive, despite their family history of bad experiences when going to Egypt.

There is a strange verse at the start of this story that has troubled commentators for generations. The Torah says that, “Jacob saw that there were food rations to be had in Egypt, he said to his sons, “Why do you keep looking at one another?” What does it mean “keep looking at each other”? The Hebrew words is a reflexive verb titrau, which the commentators largely suggest comes from the Hebrew verb ‘to see’, implying that the brothers were pretending to be okay, that they wanted to be seen to be alright despite the famine, and their father chastises them for not admitting how hard it is.

This year however, I read the verb differently. Perhaps titrau comes from the verb for fear, yirah. The brothers were terrified, and Jacob their father is telling them to not be scared, similar to how God told Jacob to not be scared when he left Canaan when he was fleeing from his brother Esau. I saw that the 15th century Spanish commentator Rabbi Abraham Selah in his commentary Tzrur Hamor also understood this to be a consolation to address the brother’s fear. Interestingly, Sela himself was forced to flee Spain during the Spanish Inquisition of 1492 and then again to flee Portugal the following year in 1493. Two of his children were forced to convert in Spain. Sela spent the rest of his life as a Jewish refugee searching for a new home. He died at sea in 1508 as he was headed to find a new home in Italy.

Our history is unfortunately full of the stories of refugees being forced to flee their homes for better lands. The Torah and Jewish history clearly want us to empathize with refuges across the world and to better appreciate their experiences. Chanukah, a holiday focused on bringing on light from our home to the outside world can also be a time to better appreciate our homes, as well as to think about those who are less fortunate.