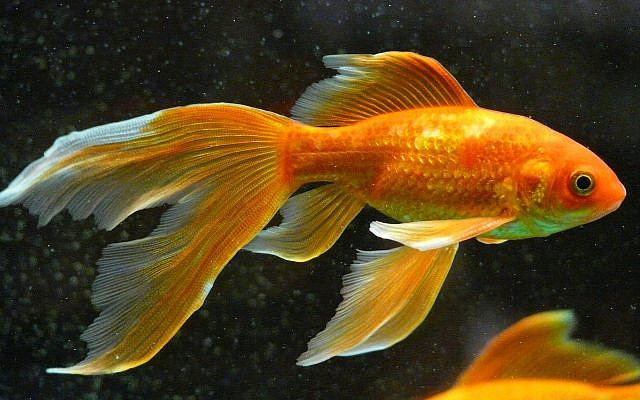 A Goldfish (Copyright Free Image by Hans Braxmeier from Pixabay)

I have a pond in my garden, home to a troubling of goldfish (yes, that’s the collective noun for goldfish). Like most people, I used to believe that goldfish had a three-second memory. But seeing my goldfish react with excitement on hearing me open the door to the garden just before my own breakfast, gave me pause for thought. Could these dumb, memory-less fish really make the connection between the door opening and food arriving? Even stranger, there is no reaction to my opening the door at any other time of day.

Research carried out back in 1994 showed that goldfish can remember things for up to three months and have a basic sense of time. The paper was entitled Temporal Discrimination Learning of Operant Feeding in Goldfish – not many humans could remember that!

We Jews would be happy to have a three-second memory. There are so many things, from ancient history to the present day, that would be better forgotten.

We remember the Holocaust. In Israel we dedicate Yom HaShoah, Holocaust Remembrance Day, to the memory of the six million Jews who perished at Germany’s hand. Sadly, the rest of the world is failing to remember its actions and inactions.

Just last year, a CNN survey showed that one out of five Europeans aged 20-40 – that’s one-fifth of the young population on the very same continent on which the Holocaust took place – had never heard of it.

We remember the end of Britain’s occupation of our land. After the Second World War, Britain tried to join the U.S. and the Soviet Union as a third world power. But an independent Jewish State was seen as an impediment to Britain’s power in the Middle East.

King Abdullah of Jordan wanted to come to an agreement with the newly declared Israel. The Egyptians, Iraqis and Saudis did not want to go to war but were pushed to attack by Britain. To encourage the Arab states, Britain sent them many truckloads of advanced weapons.

Ernest Bevin, the British Foreign Minister, went as far as to promise to equip two Iraqi divisions so they could invade Israel.

Remembering our days of weakness, Israel Aircraft Industries has come up with the HARPY, an all-weather day/night “Fire and Forget” weapon, that can be launched from behind the battle area. The enemy will not forget that in a hurry.

Intel has announced the Optane DC Persistent Memory. I have no idea what this is but its characteristics are high capacity, affordability, and persistence, which sounds like a good description for us Israelis.

Ynet news tells us that Israel’s voters have a very short memory. But, with elections every few days how can we be expected to remember who we voted for. And our politicians never remember what they promised us, so perhaps it doesn’t matter.

At the end of the day we should all remember Psalm 137:
If I forget thee, O Jerusalem, let my right hand forget her cunning.
We don’t want to find ourselves weeping by the rivers of Babylon trying to remember Zion.

And for readers with really poor memories “Ah, yes, I remember it well” was sung, back in 1958, by Maurice Chevalier and Hermione Gingold in “Gigi.”