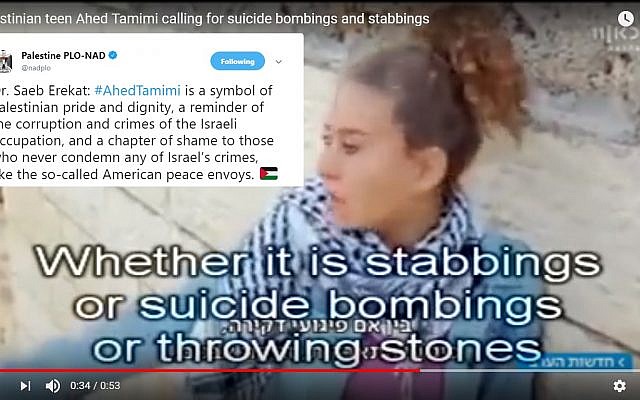 Today’s Israeli headlines all scream of Palestinian Arab Ahed Tamimi’s release from jail. Last year, the then-16-year-old Ahed assaulted an Israeli soldier on her front drive and was sentenced to an eight month prison sentence. Ahed wasn’t just any teenager, she grew up in a famed house of “resistance.” She was raised in the town of Nabi Selah and from birth she was brought up fighting Israel. Ahed’s father, Bassem, said that “the Nabi Saleh School” educates children to become “freedom fighters to liberate Palestine.” Cousin Ahlam Tamimi was the brains behind the 2001 Sbarro Pizza bombing, which was described by Ahed’s mother, Narimam as “an integral part” of the Palestinian “struggle.”

I didn’t know what Nabi Selah and the Tamimi family stood for when two organizations, Breaking the Silence and T’ruah, brought me to the Tamimi house in the summer of 2017, a few months before Ahed would commit her own act of violence. We were told that they were advocates of non-violent resistance in the way of MLK and Gandhi. A daughter, “Janna Jihad” is “Facebook and YouTube” famous for her reporting on her village’s weekly protests. I was alarmed by Ahed’s father’s statement about Palestinian terrorism that “All forms of resistance are allowed in the face of occupation.” A simple Google search of the daughter’s name showed an expose of this family’s long history of terrorism, incitement and anti-Semitism. Even the house’s fence had the anti-Israel phrase “From the River to the Sea” spray painted across it.

While sitting in the Tamimi house I couldn’t help compare my house of love and peace to the Tamimi’s house of violence. Fridays in the Tamimi house means throwing rocks at Israeli soldiers until they respond with tear gas and the perfect picture of “occupation” has been created for international media. While we talk about eventual peace in our house, the Tamimis talk about violence, resistance and terror. I wondered what constant talk of violence and admiring cousins who blow up pizza shops does to a child. How does a child indoctrinated with hate from their mother’s milk lead their life? Was it a surprise that Ahed turned to violence? I can’t imagine a child psychiatrist who wouldn’t call the Tamimi’s house and Ahed’s upbringing a form of child abuse.

I am aware that Palestinian life isn’t happy, but it is far from the oppression that is claimed. Palestinian Arabs need to stop claiming victim-hood. Any successful modern nation has taken responsibility for its destiny, and the Palestinian Arabs must start taking responsibility as well. Using their children as human shields in Gaza, sending 17 year olds to stab Israelis as they did last week in Arad, and raising 16 year old girls to assault soldiers, is a form of child abuse and child imprisonment. My Palestinian Arab Facebook friend Noor asked if Ahed is really free today. As long as Ahed is being raised in an environment of victim-hood and violence, Ahed Tamimi will never be free.