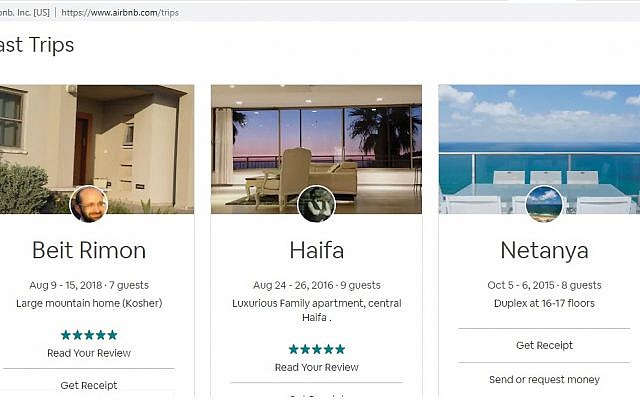 As a Jew living in Judea and Samaria (The West Bank) and Airbnb member (Since June, 2015) I was disappointed to read The Times of Israel report, “US-based Airbnb said in a statement posted on its website that after a reexamination of its policies, the company has ‘concluded that we should remove listings in Israeli settlements in the occupied West Bank that are at the core of the dispute between Israelis and Palestinians.’” This recent act of Boycott, Divestment and Sanction (BDS) is anti-Semitism and Airbnb should be ashamed of itself.

Airbnb’s policy is part of the larger BDS movement. Legal expert and Professor Eugene Kontorovich tweeted, “AirBNB continues to list properties in occupied West Sahara, North Cyprus, and Crimea, but won’t list an apartment owned by an American Jew in Jewish Quarter of Old City of Jerusalem. There’s a word for that kind of thing. …Airbnb says it won’t list places in ‘disputed territories’ when those residences are owned by Jews, and not otherwise. That’s not a policy about disputed territories, but about Jews.”

Some claim that the BDS movement isn’t anti-Semitic. Unfortunately, there is neither a clear metric of anti-Semitism nor any arbiter. The Anti-Defamation League records on its website, “Many of the founding goals of the BDS movement, including denying the Jewish people the universal right of self-determination – along with many of the strategies employed in BDS campaigns are anti-Semitic.” It is clear when Jews are the only ones demonized for the same policies many follow, anti-Semitism is at play.

Professor Kontorovich tweeted, “Airbnb continues to list numerous properties in Moroccan-occupied West Sahara, which it describes as “Morocco.” The hypocrisy of only listing Jewish properties as occupied isn’t ignorance, but anti-Semitism. The fact that Airbnb is only delisting my Jewish neighbor’s properties and not my Arab neighbor’s properties speaks of clear anti-Semitism. Is there really any other way – besides anti-Semitism – of understanding how Airbnb can delist one property (that’s Jewish owned) but a mile away keep the property (that’s Arab owned) listed?

Jews believe in the power of teshuva, repentance. I call upon Airbnb to take advantage of this Jewish vehicle of correction. Airbnb should change its policy back to allowing Jews living in Judea and Samaria to list their properties on Airbnb’s website. I obviously can’t use Airbnb’s website for our annual winter vacation while they target my neighbors. But I’m not calling on a boycott of Airbnb, I don’t need to. There is legislation that already covers Airbnb’s despicable action.

Twenty-six American states have passed anti-BDS legislation and Congress and the Senate have mirroring bills being considered in each house. These bills are expected to pass. While each state’s laws are different, South Carolina’s bans the state from entering into contracts with companies that boycott “a person or an entity based in or doing business with a jurisdiction with whom South Carolina can enjoy open trade.” The new Airbnb policy that excludes Jews in parts of Israel will be a litmus test for many of these anti-BDS laws.

I was happy to read that, “Tourism Minister Yariv Levin urged Airbnb to walk back the “discriminatory” decision, saying in a statement that he had already instructed his office to draw up measures designed “to limit the company’s activity across the country.” I expect the Israeli government to take harsher steps if Airbnb doesn’t rescind its policy, including banning Airbnb from operating anywhere within Israel.

Many of my friends in America asked how they can help. I suggest reaching out to their state representatives and making them aware of the anti-Semitic nature of Airbnb’s policy. Encourage them to look into whether Airbnb has violated their State’s anti-BDS laws. Many states require their pension funds to divest from companies that are engaged in BDS. This should include Airbnb, and state employees should no longer be allowed to use Airbnb on government trips.