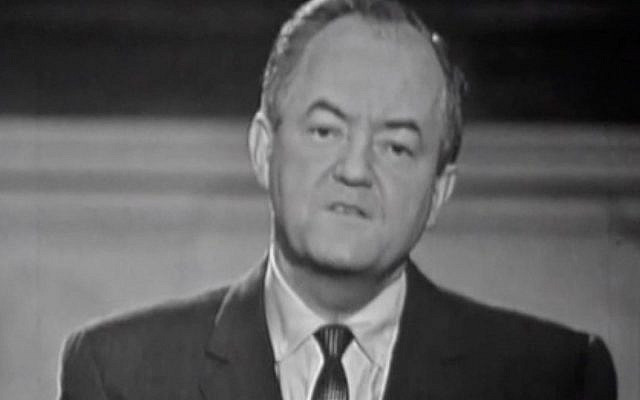 Senator Hubert Humphrey was a strong fighter for Civil Rights. This picture was taken as he made a strong plea to the Senate and the American people for the passage of the Civil Rights Bill on March 18, 1964 during a live debate against Senator Strom Thurmond arguing against the Bill's passage on CBS.

This link to the video of Strom Thurmond and HHH debating the Civil Rights Act brings home a strong point as it relates to Al Sharpton and the relationship his family had with Thurmond’s family. Less than six months after JFK was assassinated the US faced an ongoing Civil Rights challenge. Segregationist Strom Thurmond was not backing down from his position and nether was HHH. It would therefore be left to the Senate to decide if the Civil Rights Act would become law after it had passed the House.

That created a debate which aired on CBS Reports March 18, 1964 entitled Filibuster-Birth Struggle Of A Law.” Thurmond was a champion when it came to the Filibuster.

Back in those days, American blacks also had a Ku Klux Kan (KKK) problem along with the bias against them that you will hear from Strom Thurmond if you are able to listen to the accompanying video. Thurmond’s words echo a similar illogical attitude toward blacks that the South African Government held during the days of Aparthied.

Strom Thurmond was most probably a KKK supporter. Therefore it took a major effort by Hubert Humphrey to pass that Bill in the Senate. Al Sharpton during Tuesday’s George Floyd Houston funeral service told about his family history.

As I was listening to Sharpton speak I was also feeling hurt and disgust but not for the same reason. I really thought that at some stage he would mention the name of Hubert Humphrey, but much to my disappointment I never heard him utter the former Vice President’s name once during both eulogies.

You also might remember from a previous Blog that I worked in the office of I.S. Joseph to put myself through University. The owner of the company was Burton Jospeph and his wife Geri was a speechwriter for Hubert Humphrey. I learned a tremendous amount about HHH during that time and respected him as a person of values who treated everyone he met with respect.

At the 1948 Democratic Convention, Hubert Humphrey and Illinois Senator Paul Douglas were among the first party members to recognize the need for long overdue Civil Rights legislation.

On July 14, Northern Democrats pushed for the convention to adopt a strong civil rights platform plank and endorse President Truman’s pro-civil rights actions.[6] They were opposed by conservatives not happy with racial integration and by moderates who feared alienating Southern voters (regarded as essential to a Democratic victory); including some of Truman’s own aides.

In a speech to the convention, Humphrey urged the Democratic Party to “get out of the shadow of states’ rights and walk forthrightly into the bright sunshine of human rights.” The convention adopted the civil rights plank in a close vote (651½-582½). In response, all 22 members of the Mississippi delegation, led by Governor Fielding L. Wright and former Governor Hugh L. White, walked out of the assembly.[8] Thirteen members of the Alabama delegation followed, led by Leven H. Ellis.[9] The bolted delegates and other Southerners then formed the States’ Rights Democratic Party (“Dixiecrats“), which nominated Strom Thurmond for President and Wright for Vice President.

The fight over the civil rights plank was a launching point for Humphrey. He was elected to the United States Senate that year, and in 1964 was elected Vice President.

In Houston, Al Sharpton indicated that he would be returning to Minneapolis for the trial of those policemen who are being charged with George Floyd’s death. Now if Sharpton is going to the trouble of organizing a massive march in the memory of MLK’s “I have a dream speech”, he could at least schedule a tribute to Hubert Humphrey for all HHH contributed to the fight for Civil Rights.

One suggestion would be to hold a march in Hubert Humphrey’s honor that would begin at the site of Floyd’s killing, and arrive at the gravesite of HHH. The total distance is roughly 2 miles.

In a previous Blog, I wrote about the ceremony that took place during the unveiling of Hubert Humphrey’s statue. It was filled with speeches from those who knew him best. And while Senator Amy Klobuchar was speaking, former President Bill Clinton arrived and let everyone know how many times he listened to Hubert Humphrey’s 1948 Democratic Convention speech. Clinton admitted that he learned a lot from that speech which helped on his road to becoming President.

One thing is for certain, Minnesotans have always respected Hubert Humphrey for all that he did not only for the city of Minneapolis when he served as Mayor, but for everything he accomplished while serving as Senator and Vice President. And I am sure all Americans and may I add Israelis share that view.

Al Sharpton should be well aware of HHH and what he did to help the Civil Rights Movement.

This is all the more so because of Al Sharpton’s story related to his great grandfather.

That is why I am puzzled Al Sharpton forgot to mention HHH’s name during both ceremonies for George Floyd.

Today’s Minnesota DFL Has Totally Abandoned The Values Of Its Founder, Who Was Also HHH

Hubert Humphrey is considered by many to have founded the Minnesota DFL with the same principles that he stood for throughout his career.

The current Minnesota DFL Party is an embarrassment to the values that it has traditionally represented.

Just looking at the chaos that has been taking place on the streets of the Twin Cities before the recent riots proves that point. And with the death of George Floyd, this only added fuel to the fire.