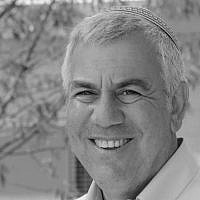 The Blogs
David Rubin
The Trusted Voice of Israel
Apply for a Blog
Please note that the posts on The Blogs are contributed by third parties. The opinions, facts and any media content in them are presented solely by the authors, and neither The Times of Israel nor its partners assume any responsibility for them. Please contact us in case of abuse. In case of abuse,
Report this post.

Since its founding in 1948, and even in pre-state days, Israel has been forced to deal with non-stop war and terrorism as its enemies continuously try to harm and destroy the Jewish state. Though Israelis have learned to have incredible strength and resilience as a result, it nonetheless has caused trauma in many citizens, amongst them children who are the most sensitive to the ugly sides of the ongoing conflict. It is the children that need our help the most to heal from and overcome their trauma.

Unfortunately, this week Israel has once again been forced into violent conflict with its neighbors as over 1,500 rockets have been fired at communities all over Israel by Hamas and other terrorists in the Gaza Strip in the past few days. Tens of thousands of Israeli children throughout the country have faced the traumatic experience multiple times of hearing the “Code Red” warning siren and having to run into bomb shelters with their families to save their lives, even in the middle of the night. This has left these children with a new bout of fear and anxiety as many of them don’t want to leave their homes and don’t want their parents to leave either out of deep concern that something bad may happen to them if they do.

I have encountered these challenges on a daily basis in my role as founder and director of the Shiloh Israel Children’s Fund, and as a result of my own personal brush with terror and trauma.

On December 17, 2001, I was returning home from Jerusalem with my then three-year old son sitting in his baby seat. Half-way home on Route 60, known locally as “the Road of the Patriarchs,” my car was suddenly attacked with a massive barrage of bullets by Islamic terrorists hiding on the side of the road. I was struck in the leg and began bleeding profusely. To make matters worse, my car died and wouldn’t start, yet the terrorists were still shooting at us. The situation was horrific, every Israeli’s worst nightmare. Miraculously, the car started again and I drove away as fast as I could to a nearby community to call an ambulance and get to a hospital. When I turned around I noticed to my horror that my son too was seriously injured, struck by a bullet in his head where the skull meets the neck. We later found out that by the grace of God, the terrorist’s bullet missed his brain stem by 1 mm. He and I went through weeks of intensive treatment in the hospital, including two operations, and were eventually released.

What we discovered afterwards was that my young son, though healing from the physical injury as a result of this terror attack, was also in need of psychological post-trauma therapy that was brought on by this nightmarish experience. That is when I decided to start the Shiloh Israel Children’s Fund because I understood the mission that God had intended for me in this world was to heal the trauma of the terror-victim children in Israel and to rebuild the Biblical heartland through those children.

Trauma is defined as a response to an extremely difficult or stressful experience that impedes an individual’s ability to cope, often leaving him feeling helpless and unable to feel a wide range of emotions.

And it is the children who need our help the most to deal with their trauma.

While adults can go to a therapist to talk out the issues caused by the traumatic experience and the therapist will guide the process of their healing, helping children to overcome trauma is much more difficult. While they may seem very open and emotionally expressive, children who experience trauma often bury the experience deep inside themselves, making it a challenge to treat them. This often leads to their trauma being expressed in all the wrong ways such as sleepless nights and fits of anger towards other children as well as family members.

No two traumatic events are exactly the same but essentially the treatments are similar. Most importantly is that there must be open communication between the child and the parents (or guardians), the family and the educators in the child’s life; listening to the child is essential. These adult figures also need to make sure they are watching very carefully for symptoms that are brought on by the trauma, which will arise even with the best of treatments. It is our goal to minimize the post trauma symptoms, and we can be successful, if appropriate treatment is provided.

There are various forms of therapy that have been proven to help children deal with and overcome their trauma, all of which serve as an intermediary between the child and the therapist. Examples include music therapy, art therapy, playing with young animals, horseback riding, Biblio-therapy, and multi-sensory safe-room therapy. Ideally the form of therapy should involve a medium that the child already likes and enjoys.

All of these forms of therapy are utilized by the Shiloh Israel Children’s Fund for the purpose of treating the trauma of Israeli terror-victims. Children who have experienced a terror attack will often display a fear of Arabs or Muslims, a fear of being attacked again, or a fear of going outside or being in public spaces.

With the proper care we can help the children of Israel who have experienced trauma this past week overcome their fears and their anxieties and return to a happy, healthy and balanced life.

About the Author
David Rubin, former mayor of Shiloh Israel, is the author of the book, “Trump and the Jews” and six other books, including his new book, "Confronting Radicals: What America Can Learn From Israel". Rubin is the founder and president of Shiloh Israel Children’s Fund, established after he and his then three-year-old son were wounded in a terror attack. He can be found at www.DavidRubinIsrael.com or at www.ShilohIsraelChildren.org
Related Topics
Related Posts
Comments