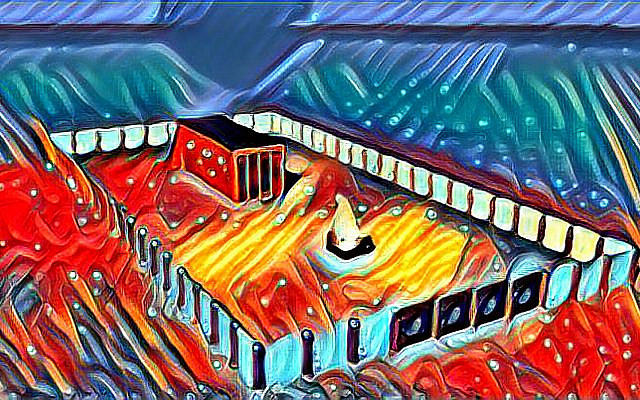 This file is licensed under the Creative Commons Attribution-Share Alike 4.0 International license.

For those who grew up in the Jewish Faith, they can tell you many stories of learning about the building of the Mishkan (The Tabernacle) as a kid, with plenty of coloring books and cutouts to illustrate it. As the precursor to the Bais Hamikdash (Temple), it was built during a time when the Israelites hadn’t a lot of money or resources, but indeed a growing amount of (needed) faith.

Rashi states that there were three types of donations given to make the Mishkan, with most of it being built by money given “from the heart.”

However, the Adanim (Foundation) of the Mishkan was made from the half-shekel which each Jew was required to give, regardless of their wealth or status.

This might seem very simple on the outset, but the contribution of the half-shekel in the desert established not only political equitably amongst the Jews in the Midbar (Desert) but showed the necessity of equal responsibility to start a new community. While after the foundation was built, those then could donate “according to the inspiration of their heart,” to create the rest of the most holy space.

While we don’t obviously have a Mishkan to donate to, every Jew in the modern world, has an equal share of the building of the foundation of Klal Yisrael (All of Israel, the Jewish People) regardless of our background, affluence, or even our level of faith.

Rabbi Aryeh Kaplan, ZTL writes in the Handbook of Jewish Thought that the “The Jewish people accepted their religion together as one unit, and continue to function as a community rather than as mere individuals.

All Jews are therefore responsible for one another. Even the responsibility for individual obligations does not rest upon the individual alone, but upon the entire community. It is for this reason that one Jew may recite a blessing for another even if he has already fulfilled his own obligation.”

As a community, we are now the “foundation” of the faith, and perhaps in these difficult times we need to examine more what that means to be there for each other. The Talmud (Shevuot 39a uses the Aramaic phrase, Kol yisrael arevim zeh bazeh, meaning “all of Israel are responsible for each other.” In these times, the words resonate even more than ever.

Rabbi Jonathan Sacks, ZTL suggested seven principles that would start enhancing working for each other as Jews. I’ve added a few comments of my own within his quotes.

1) Keep talking to one another. “The more you talk, the more you are likely to eventually find a way to work together.”

2) Listen to one another.  “Listen deeply to one another. Hear what your opponent is saying. Listening is profoundly therapeutic. It is also deeply spiritual. The good news about the Jewish people is that we’re among the world’s best speakers. The bad news is that we’re among the world’s worst listeners. This has to change. Shema Yisrael, the great command, means, “Listen, Israel.”

3) Work to understand those with whom you disagree. The law follows Hillel, not Shammai, because Hillel’s students were kind and humble, and always quoted the other side’s opinions before their own: Rav Abba stated in the name of Samuel: For three years there was a dispute between Beth Shammai and Beth Hillel, the first saying, ‘the halachah agrees with us’ and the second [also] saying,’the halachah agrees with us’.

Then a heavenly voice  was heard saying, “חיים אלהים דברי ואלו אלו — Ellu v’ellu divrei Elokim Chayyim — These and these are the words of the living God, but the halachah agrees with Beth Hillel.”

However, since both are the words of the living God, what was it that entitled Beth Hillel to have the halachah agree with them? Because they were kind and modest, and studied both their own rulings and those of Beth Shammai and were even so [humble] as to mention the opinions of Beth Shammai before their own. [Eruvin 13b]

6) Even if you do not agree with fellow Jews, show that you care about them “We may not agree on anything, but we remain a single extended family. If you disagree with a friend, tomorrow he or she may no longer be your friend. But if you disagree with a family member, tomorrow he or she is still part of your family. Being a family is what keeps us together. We don’t need to agree with each other, but we do need to care about each other.”