Yesterday, Bari Weiss, The New York Times Op-Ed Staff Editor and Writer resigned from The New York Times.  In her resignation letter addressed to the publisher of the New York Times, A. G. Sulzberger, she cited a failure of the paper to embrace a diversity of perspectives stating, “Instead, a new consensus has emerged in the press, but perhaps especially at this paper: that truth isn’t a process of collective discovery, but an orthodoxy already known to an enlightened few whose job is to inform everyone else.”

This is not news to those of us who have been strong advocates for Israel.  Organizations such as Camera and Honest Reporting came into existence because of the blatant bias that has been pervasive in the reporting on Israel by leading news outlets such as The New York Times.  Since The New York Times has long been considered one of the most influential newspapers in the US, it is important for people, especially Jews, to take notice of this resignation and what it represents.

Bari Weiss was originally brought into The New York Times shortly after President Trump was elected. As stated in her resignation letter, “I was hired with the goal of bringing in voices that would not otherwise appear in your pages: first-time writers, centrists, conservatives and others who would not naturally think of The Times as their home. The reason for this effort was clear: The paper’s failure to anticipate the outcome of the 2016 election meant that it didn’t have a firm grasp of the country it covers.”

Instead of being able to bring in new thoughts and opinions, she found that The New York Times’ objective was shaping the readers’ opinions through selecting what they wanted to report on and how they presented the story.  Referring to reporting as, “…the first rough draft of history,” she saw The Times, “Now, history itself is one more ephemeral thing molded to fit the needs of a predetermined narrative.”

The mere decision to cover or omit a story demonstrates is a bias.  For example, waking up this morning CNN cable coverage had nothing on her resignation.  The decision not to feature this story tells us that CNN does not believe this to be newsworthy on its cable network. So those who rely on their cable network for the news may never hear of the resignation or what it represents.

Sometimes, it is not what they cover but how they cover it. If you look on CNN’s website, you will find the headline, “Controversial opinion writer Bari Weiss resigns from The New York Times, blasting the paper for ‘illiberal environment’.”  The report attempts to paint Weiss as controversial.

CNN’s actions represent two of the major issues that Bari Weiss experienced at The New York Times; not covering certain stories and molding the story to fit the media outlet’s narrative. The coverage of her resignation by CNN demonstrates that bias is not only endemic to The New York Times but can be found in other major news outlets.  And my experience is that it can be found in all outlets today.

Bari Weiss was brought in explicitly to seek out divergent opinions that were not previously being featured. It appears doing her job created a hostile environment within the newspaper.  that eventually forced her to resign.  Some employees at The New York Times posted emojis of axes next to her name encouraging management to fire her.  This is even more important for Jews to be aware of because the harassment included elements of Antisemitism. They criticized her for, “…writing about the Jews again,” which she learned to ignore. Colleagues who disagreed with her views labeled her a “Nazi” and a “Racist.” I worked at IBM for over 17 years and every year had to take training on proper behavior in the workplace. Not only should this behavior not be tolerated; if such behavior was reported, investigated, and turned out to be true, it should result in the immediate dismissal of all participants.

It was clear she was an independent thinker. Although she has been called a centrist I think it does not truly represent her positions. She was a person who took time to develop an understanding of a situation before she formed an opinion. This can clearly be seen in her 2019 National Jewish and Natan Notable Book Award-winning How to Fight Anti-Semitism.  She clearly was not a supporter of President Trump.  She also was critical of some of President Obama’s policies and actions.  She was not afraid to call out radical Islam. She also was critical of some actions and decisions at The New York Times. She is a strong supporter of Israel and believes in a two-state solution. Some of her positions appear to align with beliefs on the right while others would be supported by people on the left. Perhaps being thoughtful is why CNN labeled her ‘controversial.’

One of the justifications CNN provided for assigning Bari Weiss this label was because she signed a  Harper’s Magazine Letter commenting on the progressive culture and how it is stifling and repressing free speech, thoughts and ideas. This is an important letter during very troubling times signed by many advocates of free speech including CNN’s very own Fareed Zakaria.  The very institutions that should be the guardians of free speech are criticizing and adopting practices that instead mutes it.

There are two issues that concern me about this resignation. The first is it talks about the free exchange of ideas appears and the very essence of free speech being threatened in today’s environment.  Having grown up in the liberal ’60s, I have always thought the way to a better society is through the free exchange of ideas; however, in today’s atmosphere, you are harassed and censured if your thoughts differ from the progressive views of the few who are already enlightened.

The second and more dangerous issue for Jews is the message being fed into the US and all around the world. For many years now Israel has been portrayed in many news outlets as the aggressor and occupier in the conflict.  There is little attention being given to the Palestinian Authority actually funding terrorism nor has the facts been presented that the Palestinians have refused every peace settlement offered to them since the Peel Commission in 1937.  For those who do not know the history of modern Israel, which includes most Jews in the diaspora, they are getting their information from organizations that have a clear bias.  So, when we look at the changing attitude towards Israel especially among younger Jews in North America and Europe, we can begin to understand one of the factors breeding their discontent.

The good news is that the Bari Weiss resignation is being covered by most major media outlets, including The New York Times itself.  My hope and prayer i 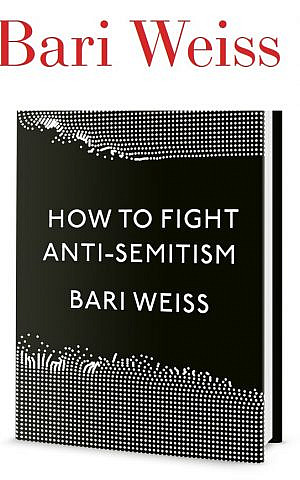 s this will begin a review of practices within these organizations and be the catalyst for change to foster a culture embracing diverse universe of perspectives and ideas, reporting on facts, and allowing the individual to draw their own conclusions instead of being told what to think.

But don’t take my word for it.  I try to read everything for myself and make up my own mind and I highly recommend you do the same.  I would start by reading the Bari Weiss resignation letter on her website https://www.bariweiss.com/resignation-letter

I also highly recommend reading How To Fight Anti-Semitism which she published last year. If you want to find out more about the book you can see my review on GoodReads at https://www.goodreads.com/review/show/2986286413

Finally, judge for yourself the Harper’s Magazine “A Letter on Justice and Open Debate” that Bari Weiss signed along with many others including Salman Rushdie who has been the victim of religious censorship at https://harpers.org/a-letter-on-justice-and-open-debate/