WATCH: Michael Oren gives a fascinating and entertaining lecture about the history and current status of the U.S./…

“As a historian, I am always humbled by our general inability to predict which moments in time will or will not become turning points,” said Ambassador Michael Oren last Saturday evening, as he addressed a crowd of 500 people at the annual lecture Manhattan Jewish Experience hosts in memory of my mother, Ruth B. Wildes of blessed memory. (See video above). “We can never truly know how any event or phenomenon will shape history, but we know one thing for certain right now. As of the horrendous attacks last night in Paris, the world will never be the same.” 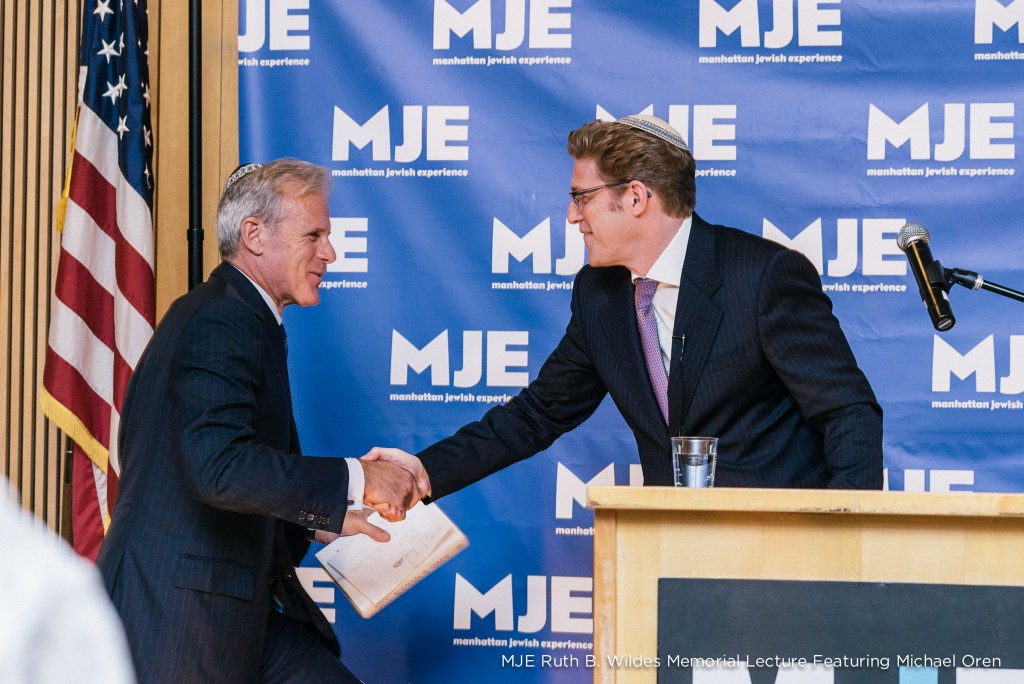 I had the distinct pleasure of introducing Dr. Michael Oren. Photo by Pako.

His words hit me deeply.

These are indeed tumultuous times. In addition to the heart breaking events in Paris, nearly every day there is news of another terrorist attack in Israel. Last week, an 18-year-old boy from Boston, Ezra Schwartz of blessed memory, was gunned down by a Palestinian terrorist. The young man had come to Israel to study Torah in his gap year after high school and was attacked after delivering food to lone soldiers. These kinds of attacks are happening every day in Israel. More and more Western cities are now threatened by ISIS, the massive Syrian refugee crisis grows, an emboldened Iran continues to fund terrorist groups and shocking displays of anti-Semitism can be found on U.S. campuses, accepted as legitimate protest.

This is all upsetting for any peace loving person, but for those who also care deeply about Israel and its people, these times are extra frightening. Every decision world leaders make regarding the Middle East affects Israel more acutely as the enemy lives in her backyard. I have to say, when visiting the Israeli – Syrian border this summer, it was surreal to see an ISIS camp no more than two miles away.

Another aspect of the status quo that also seems to have changed is the relationship between Israel and her greatest ally, the United States. In his speech, Michael Oren discussed the nature and origins of these relatively recent changes. The nature of these changes he said, are two-fold, the first being Obama’s injection of “daylight” between the U.S. and Israel, rejecting the unspoken policy up until now that disagreements between the two countries be kept behind closed doors, publicly displaying only a face of unity. The second major change is the addition of “surprises” to the relationship through the retraction of the former policy allowing Israel to review any U.S. strategic announcements or policy declarations that would in any way affect the Jewish State. The origin of these developments, Oren suggested, is the dramatically different world views and resumes of the two nations’ leaders, Obama and Netanyahu, who came into office within two months of each other.

Where Obama is an idealist bordering on naiveté, Netanyahu is a pragmatist focused on regional security. Where Obama sees rational players who can be reached through diplomacy, Netanyahu sees untrustworthy players who sometimes take rational steps to achieve irrational goals. Where Obama is willing to gamble, Netanyahu recognizes a risk that carries the threat of annihilation of his people. Same data, very different conclusions.

However, despite these real differences, Oren left us with a very positive message because he emphasized that the ties that bind America and Israel are much stronger than the issues which divide. The nature of the U.S.-Israel alliance is one which is truly unparallelled by any bilateral relationship the U.S. has enjoyed with any other country in the post World War II era. Three aspects of cohesiveness bind America and Israel according to Dr. Oren:

1) Military Cooperation: Since 1967 Israel and the U.S. have consistently shared military intelligence and technology. Israel is the only country in the Middle East that can be counted on by the United States as a strategic and military partner.

2) Democratic Form of Government – There are only a handful of other countries in the world, let alone the Middle East, who have known no other political system but democracy and are so devoted to maintaining it.

3) Spiritual/ Biblical Ties – Oren spoke in fascinating detail about the spiritual and biblical connections between Israel and America dating back to the first Puritans who set foot in the new world. The saw themselves as the “New Jews” escaping the persecution of the old world which they likened to Egypt, crossing the Atlantic (their “Sinai”), to create freedom in their new promised land. The Hebrew Bible and even the Hebrew language was studied by some of the Founders Fathers. James Madison, the U.S.’s fourth President, was a Hebrew major at Princeton. After the Revolutionary War, Thomas Jefferson and Benjamin Franklin designed a seal for the U.S. that featured Moses leading the Jews out of bondage (this design was ultimately not chosen and we ended up with the bald eagle.) The descendants of the Puritans and the Founding Fathers concluded that to be good Christians, and good Americans, it was their divinely ordained duty to help restore Jews from their exile to sovereignty in their ancient promised land. Oren quoted multiple U.S. presidents, from John Adams to Abraham Lincoln who spoke of the Jews returning to “Judea” and Woodrow Wilson who pledged support alongside the British for the Balfour Declaration calling for a Jewish homeland in the area known then as Palestine. Even Harry Truman, who against the advice of all his advisors, made the U.S. the very first nation to recognize the modern State of Israel, cited the Bible as his reason for doing so. He saw himself as Cyrus – the ancient Persian king who helped rescue the Jews from exile and restored them to sovereignty in their ancient land. 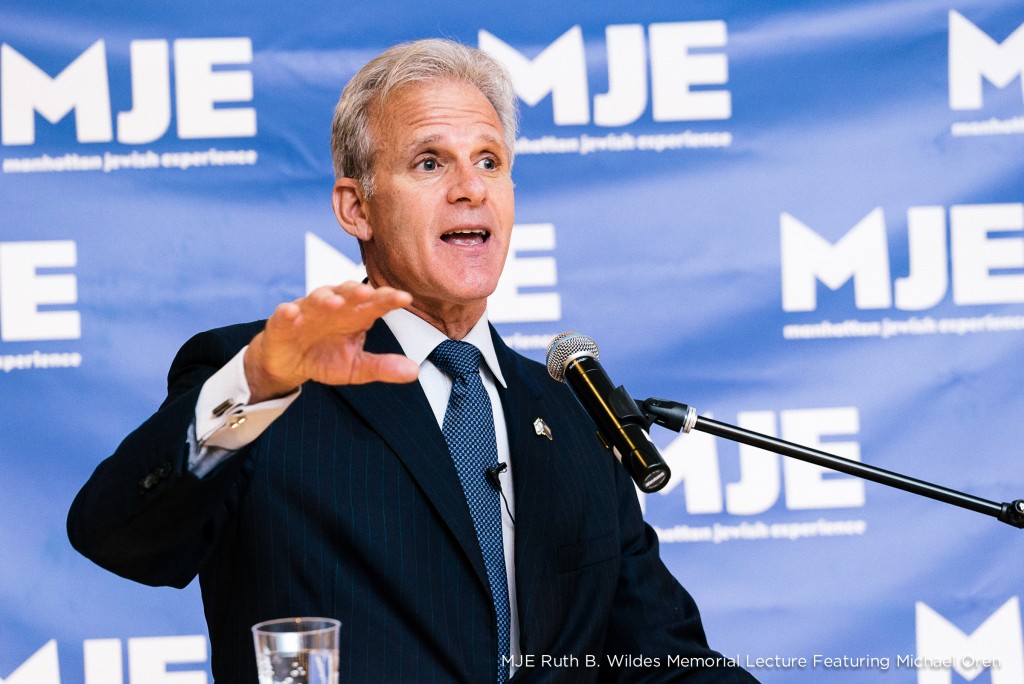 Oren speaking to a crowd of 500 at the MJE Ruth Wildes Memorial Lecture. Photo by Pako.

Oren poetically shared what it means to be an “ally” — that despite even real differences, there is a common subscription to something greater that ultimately unites.

This lesson, of being an ally by subscribing to something greater despite other real differences, is one that extends past the United States – Israel relationship, and beyond any political alliance for that matter. Peace loving people throughout the world have a lot of differences right now. We disagree on what to do about the Syrian refugees, how to respond strategically to ISIS and many other key issues, but we should all be “allies” in the defense of our common humanity.

We who believe in the sanctity of all humankind, a belief rooted in the biblical tradition, must stand together against those who do not. Being created in the image of God demands all people are treated in a fair and dignified manner and also obligates us to defend ourselves and others when such dignity is withheld; when people violate the sanctity of life by ruthlessly attacking others. There is no greater desecration of the divine image, in which we are all created, than allowing innocents to suffer at the hands of the cruel. As such, wiping out terrorism is not only a practical necessity, it is also a religious and moral imperative.

Judaism teaches that every single person has a spark from the Creator. Life is sacred, and all people who hold this value must remain allies in the fight to keep it so. There are real differences that need to be carefully considered and debated. Despite these differences, however, we must remember that ultimately we are allies in our own humanity.

Dedicated to the memory of Ezra Schwartz, of blessed memory.