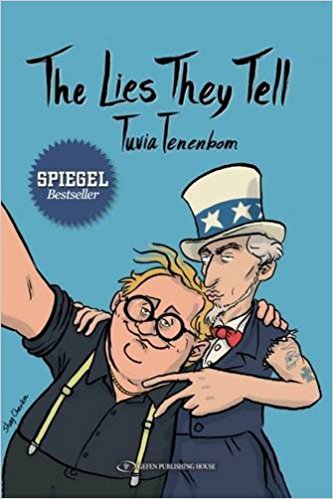 Tuvia Tenenbom’s newest book, The Lies They Tell, (Gefen Publishing: 2017), is a social anthropology about America and its Jewish community. He is a best selling author, journalist, and dramatist holding a B. A. in mathematics and computer science. He finished Orthodox rabbinical studies in Jerusalem, “Christianity, Islam, journalism, acting, theatre and finance (at NYU).” He tells people he encounters on his wanderings across America he is a German journalist.

Tenenbom spent a year on the road engaging ordinary folk in dinner-type conversations about life in America, their opinions about social change, national and international politics, and Israel. He meets “the people,” in churches, synagogues, squalid inner cities, bars, restaurants, Indian casinos and reservations, homeless camps, political rallies, conventions and news conferences. Through these sometimes disheartening frequently hilarious encounters, Tenenbom gathers his impressions of the real America, not the one most people learn about from TV and Hollywood.

Tuvia keeps telling us he is short, fat, slovenly, a cigarette fiend, who is forever hungry. Eating his way across the country. This adds to the ruse disarming Americans as he peels back their politically correct thick skin. He finds the diversity of American food reflective of the nation’s cultural disparities and political divides. It’s a subtle and brilliant way of telling a story.

But this is a ruse. Tenenbom is a modern social anthropologist with a winsome interviewing style, and a knack for tossing off the perfect bon mot. His wit, intellectual versatility, and insight makes the book an easy read. The picture painting writer style leaves readers smarter, but depressed about American’s unable to face their own political duplicitousness and vainglorious nationalism.

Remember CBS journalist Charles Kuralt? They share a wanderlust for the beautiful country kvelling over living “on the road.” Kuralt and Tenenbom are forever in search of a good story. But Tenenbom diverges from Kuralt’s conclusion that, “The everyday kindness of the back roads more than makes up for the acts of greed in the headlines.”

Just the opposite. Tenenbom has harsh words for American hypocritical liberals and progressives:

“The America I find is not the America I wished to find. It is racist, it is hateful and its citizens are bound to destroy themselves. Be they blacks and some Spanish who have nothing better to do with their time than shoot each other in the head; be they Jews who are possessed by a terrifyingly psychotic illness of self-hate; be they Indians who have given up any semblance of spirituality in exchange for acres and casinos; or be they all the others: whites, the rest of the Spanish, Muslims, Mormons and others who live in fear of one another.”

They fume over the shooting of a rock throwing Palestinian by an Israeli soldier. They despair about poverty in Africa and Haiti. Climate change dominates their agenda. Yet, Americans virtually ignore the hundreds of children shot every weekend in their inner cities of Chicago, Baltimore and elsewhere. They disdainfully block-out malnourished, going-to-bed hungry, homeless people he meets from Hawaii to Florida. He writes with some considerable mixture of anger and disbelief about this intelligent sclerosis.

In one scene, Tuvia interviews residents living dreadful existences in the political district that catapulted Mr. Obama to political power. Police pass by stopping to ask what this white man is doing here? They order him to get out, because these black folk are likely to rob Tuvia or worse.

His most harsh predictions are for the Jews of America.

Tuvia is more than uneasy about the future of the only world superpower and modern empire. She is a nation built on diversity, but its people live in separate universes. Despite their pride and tolerance of America’s diverse religious, ethnic, racial, and cultural populations, the country is severely segregated.

Unabashed patriotism, evident at rallies, in music, on radio and TV, leads them busily “convincing themselves that they are the only true guardians of culture and morality and therefore it is their duty to invade and bombard foreign countries that do not abide by their sense of morality and ethics.”

Publication of The Lies They Tell, ranks Tenenbom among the best social anthropologists like Viscount Alexis de Tocqueville and Mark Twain. Tenenbom too analyzes America’s living standards, democracy and social contract. This polymath has an interviewing style of disarming exuberance and bonhomie that keeps the reader engaged, and turning pages to get to the next encounter.

Perhaps Tuvia Tenenbom is too jaded to be positive about the future of America. He was certainly gloomy about the future of Israel in his earlier publication, To Catch a Jew. Israel cannot possibly survive, because of internal religious divisions and self-interests. The Palestinians cannot prosper or make peace, because they are in suspended animation. Europeans, Americans, and Arab states exploit their plight, and throw scraps of money at them that changes nothing on the ground. The whole region, according to Tenenbom, is “theatre of the absurd.”

He has little better to say about America’s future. Despite all the community organizers, money thrown at the poor, good-hearted, well-meaning advocates and activism, minorities still suffer, the homeless are invisible, fear and loathing of “others” predominate. Jews think they haven’t done enough, and are interminably guilty and self-loathing. At a Jewish organization event Jews and Israel are castigated. No discussion. No evidence. No explanation, yet, “The Jews present here applaud her.” The lies they tell.

About the Author
Dr. Harold Goldmeier manages an investment firm, is a former Research and Teaching Fellow at Harvard University, and teacher to international university students in Tel Aviv. He served in the administrations of US governors and the Surgeon General, works as a commerce and industry consultant, writer, and public speaker.
Comments