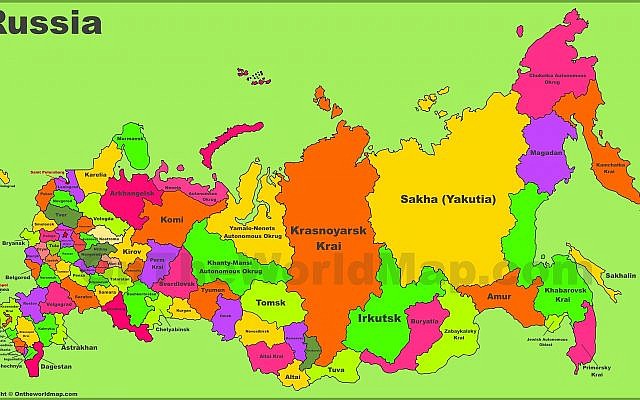 From the news media:
Speaker of the House Nancy Pelosi (D-CA) published a statement and a series of tweets suggesting that Russian President Vladimir Putin was controlling President Donald Trump through the use of secrets about him.
—————-
This statement is a culmination of the anti-Russia propaganda fueled by the anti-Trump forces in the country in the hope either to remove Trump by impeaching him or making him unelectable the next time. However, this propaganda does not harm Trump – it harms America itself.

To figure out why it is so, we should recall the core Russian interests – the long-term strategic interests, not a short-term political.

The true Russian interests are coming out of the three fundamentals of Russian history and traditions.

The “genetic” Russians are in minority in their own country. The “genetic” Russians are those whose forefathers lived in the historic Russian cities, such as Novgorod, Pskov, Moscow, Tver, in 14-15 centuries. Most of the Russian population consists of those who were captured by Russia during the 17-19 centuries’ expansionist wars – North to Finland, South to Crimea, West to Poland and East to the Pacific Ocean. The result – a mixture of various cultures and traditions where a peaceful coexistence could be preserved only by a strong tsar-like ruler – an Enlightened one as the current President Putin, or а murderous one as the former Dictator Stalin.

An external enemy is needed for maintaining the country’s unity

To preserve the people’s unity in a country with no unifying fundamental common traditions, an external enemy is needed the fear of whom is stronger than the internal dissent. In the Soviet times, the external enemy was the USA and the entire Western world. After the Soviet Union ceased to exist, and together with it the external enemy, the internal rivalry was tearing Russian into pieces at the very end of 20 century. And the Russians are thankful to President Putin who at the very beginning of 21 century was able to install the traditional authoritative order and stop further defragmentation of Russia. And the USA had helped Putin enormously by the economic sanctions that restored the image of the USA as an external enemy that was desperately needed.

The Russian historic tradition of government corruption (bribing the government officials who are in power to give or not to give anything) makes it difficult to create a truly effective Western-type economic system. However, President Putin has been able to create a sort of manageable economic corruption that let Russia resolve the two tasks mentioned, and the American sanctions were a needed push.

From the new media:

The Russian agriculture is a booming sector in an otherwise sluggish economy. Production has increased by more than 20% in the past five years, despite a broader recession. “That’s what’s called a breakthrough,” President Vladimir Putin gushed as he discussed the upbeat figures at a recent meeting with farmers. Export revenues from agriculture—which reached over $20bn in 2017—now exceed those from typically strong earners such as armament sales. Grain has been the star. In 2016 Russia became the world’s leading exporter of wheat for the first time since before the Russian revolution. “Grain is our second oil,” said Aleksandr Tkachev, the agriculture minister at the time.

In his annual state of the nation address, Russian President Vladimir Putin unveiled a nuclear-powered, nuclear-armed cruise missile that he claimed could fly indefinitely and deliver a warhead to any point on the earth’s surface. The weapon seems so fantastical that some analysts simply didn’t believe the initial reports of the missile.

The US failed to change the Russian behavior by the force of sanctions because many American “politically-correct” leaders failed to understand that a powerful rival nation such as Russia cannot change its spiritual fundamentals by outside pressures. To avoid possible awful military confrontations, we must get back from sanctions to negotiations. However, now the USA is at a much worse negotiating position in comparison with what was before the anti-Russia madness.