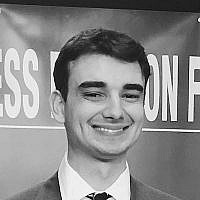 The Blogs
Jeff Becker
Apply for a Blog
Please note that the posts on The Blogs are contributed by third parties. The opinions, facts and any media content in them are presented solely by the authors, and neither The Times of Israel nor its partners assume any responsibility for them. Please contact us in case of abuse. In case of abuse,
Report this post.

One of the founding fathers of Israel’s “new historians,” Benny Morris, has spent most of his career being tossed around as an extremely controversial hot potato between the political left and the political right in Israel.

So how does the political ideology of one Israeli Historian represent the current position (or lack thereof) of many American Jews in wake of renewed fighting in the Levant. To answer this, it is important to look at Benny Morris’ differentiating reactions towards the First Intifada (1987-1993) and the Second Intifada (2000-2005). During the First Intifada, Benny Morris refused to serve as a reserve soldier in the Israel Defense Force because he found justification in the popular uprising and street protests coming from ordinary Palestinian people to liberate the West Bank and Gaza Strip from Israeli military occupation.

Fast forward to the Second Intifada, and you see a dramatic shift in Morris’ views. No longer did Morris view the intifada as street protests or a popular uprising of Palestinians. Rather, he saw the Second Intifada as an orchestrated wave of suicide bombings stemming from a PLO which was not interested in peace whatsoever (as Arafat made clear at Camp David in 2000).

So how does this affect American Jews given the recent flare up of conflict? A significant proportion of American Jews are currently stuck somewhere between the contrasting perspectives Morris held regarding the Intifadas. In Jerusalem, many American Jews relate to Morris’ perspective towards the First Intifada, seeing the street protests in Sheikh Jarrah as a justified resistance against an emboldened and encroaching religious nationalist camp in Israel that is seeking to advance Jewish settlements in East Jerusalem at the expense of the Palestinians.

However, when we move to the southern front of the conflict in Israel, we see two terrorist organizations (Hamas and the Palestinian Islamic Jihad) – having usurped power in the Gaza Strip after Israel’s unilateral disengagement from Gaza in 2005 – capitalize on current conditions to fire hundreds of indiscriminate missiles at Israeli civilians. In this case, many American Jews relate to Morris’ perspective towards the Second Intifada. That is, no matter how much land Israel gives up; it will never be enough. The Palestinian terror factions will continue to carry out the work of their respective charters to destroy the State of Israel, with or without occupation.

So where do we go from here? It is possible to understand that both of Morris’ perspectives of the two intifadas can both be true at the same time. Unfortunately, moderate voices which seek to find general compromise and solutions to this decades-old conflict are ill-equipped to express alternative approaches towards finding solutions in today’s emotionally driven conversation taking place primarily on social media. The voices which are now amplified are the two extreme reactions to Morris’ view of the two intifadas. Nowadays, in today’s tense political climate, one can either be only pro-Israel or pro-Palestine, there is no middle ground. But at the end of the day, it is important to recognize that a bad situation usually generates some sort of resolve or compromise in the end. The Israel-Egypt peace agreement after the Yom Kippur War, the historic Oslo Accords and Israel-Jordan peace agreement after the 1st Intifada, the disengagement from Gaza and the Annapolis Conference after the 2nd intifada. In the wake of the 2021 Israel-Palestine crisis, we can start by highlighting the possibilities of a new era, where we can combine both of Morris’ perspectives on the two intifadas to at least start a reasonable conversation to make some progress in preventing further escalation in such a hostile political climate.

About the Author
Jeff Becker is the former US Election Coordinator to the 38th World Zionist Congress. He holds a BA in International Relations from American University's School of International Service.
Related Topics
Related Posts
Comments
Advertisement