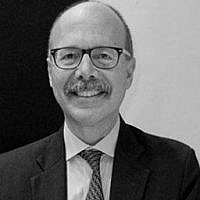 The Iran nuclear deal has been signed, sealed and delivered. The US just released $100 billion cash to the Islamic Republic. Multinational companies are flocking to do business with Tehran. President Rouhani is treated like a celebrity in European capitals. Yet Iran shows no signs of the hoped-for moderation that drove the deal.

The Iranian navy recently fired a missile in close proximity to a US navy ship, and separately seized a small US boat and publicly humiliated its captured crew. Iran continues to call for Israel’s destruction, and Ayatollah Khamenei issued a Holocaust-denying video on Holocaust Memorial Day. With so much vested in the nuclear deal the Obama Administration and the Europeans have chosen to look the other way, preferring appeasement to confrontation. All this gives rise to a troubling and very important question — why did American Jews not join the overwhelming majority of our Israeli brethren in opposing the nuclear deal?

The answer, unfortunately, is that Israel has become a partisan issue in US politics. Democrats have become increasingly anti-Israel during the Obama years. Jewish Americans, most of whom are Democrats, have largely acquiesced in or even joined their party’s attitudinal shift away from the Jewish State.

Everyone remembers how the American public — and American Jews — swooned when Barack Obama gave his electrifying speech at the 2004 Democratic Convention. Attracted by his liberal values, his soaring rhetoric, and his life story, Jews voted overwhelmingly for Mr. Obama in both presidential elections, raised tens of millions of dollars for his campaigns, and held many high positions in his Administration. No president since John F. Kennedy has been so admired in the Jewish community.

Jewish support for the president has persisted even as US-Israeli relations have sunk to near-historic lows. The president has done little to hide his disdain for Prime Minister Benjamin Netanyahu, who in turn harbors distrust for a president he believes has deliberately downgraded Israel’s status from key ally to major irritant. Secretary of State John Kerry has blamed Israel for the failure of peace talks, warned Israel it will face more boycotts, and likened Israel to a would-be apartheid state.

The administration’s Ambassador to Tel Aviv, Dan Shapiro, has delivered harsh condemnations of Israel, most recently by accusing Israel of maintaining a legal double-standard for Jews and Arabs. The administration’s policies elsewhere in the region, including its embrace of the Muslim Brotherhood in Egypt, its collapse of will after Syria crossed the infamous “red line” and gassed its own civilians, and its lack of success against ISIS have also stirred grave fears among many Israelis about the Obama administration’s commitment to the US-Israel alliance.

As if all that were not enough, the Obama administration last summer delivered perhaps the greatest blow to Israel in the 68-year history of the US-Israel relationship by signing the nuclear deal with Iran, a deal that at best postpones, but does not halt, Iran’s march to nuclear weapons.

In a rare show of unity, opposition leaders Isaac Herzog and Yair Lapid both expressed strong agreement with Prime Minister Netanyahu’s position that the deal was bad for Israel’s security. They and many in the Arab world raised serious concerns about the deal: will inspections on 24-days’ advanced notice be sufficient to deter or detect cheating, especially if the Iranians are allowed to “self-inspect” by collecting soil samples? Will Iran spend the tens of billions in repatriated cash and new oil revenue to fund terror, bolster Hezbollah and Hamas missile stockpiles, and perhaps even outsource interim nuclear weapons production to North Korea and Pakistan?

Will the threat of “snap-back” sanctions, whatever that means, ensure compliance? And what will happen if Ahmadinejad or another lunatic comes to power? No wonder every US ally in the region, including Israel, Egypt, Saudi Arabia and Jordan joined in an unprecedented display of unanimity to express their grave concern at this stunning change in US foreign policy.

But the announcement of the Iran deal hardly made a dent in Jewish support for the president. Nearly every Jewish member of the Senate and House supported the deal. Those Jews who opposed the deal, such as Senator Chuck Schumer, made no effort to rally support for their side. While several Jewish organizations — most notably AIPAC — opposed the deal, that opposition was undermined by J Street, which chose sides with the administration against Israel.

Many observers were astonished to hear J Street proclaim itself a better judge of Israel’s security than the Israeli government and military/security establishment. Even more astounding has been J Street’s recent announcement that it will work to unseat those incumbent Republican Senate candidates in 2016 who supported Israel’s position on the Iran deal.

How did it come to this?

The lack of strong, unified American Jewish support for Israel on an issue like Iran would have been unthinkable in earlier times. Until recently, American Jews had Israel’s back, providing political, financial and moral support from afar. Unfortunately, however, American Jewish enthusiasm for Israel has dwindled dramatically during the Obama years, primarily because many American Jews have come to view the dysfunctional relationship between President Obama and Prime Minister Netanyahu through the prism of the Democratic-Republican rivalry, with Netanyahu cast in the role as a far-right, fringe politician. Viewing Netanyahu as a right-wing Jewish Republican rather than as the democratically elected Prime Minister of Israel has created a comfort zone for American Jews to criticize him (and by extension Israel) openly and publicly, including a small but growing number who have taken the criticism to extreme lengths.

For example, several American Jewish university professors and students have expressed support for the Boycott, Divestment and Sanctions movement, including the American Studies Association’s decision to boycott Israel. Even more disturbingly, some American synagogues have banned prayers of support for Israel and the Israeli army.

This trend did not happen overnight. Well before President Obama’s election, anti-Israelism began to emerge from the shadows and penetrate mainstream political discourse in the United States. While the Republican Party has had its share of such sentiments (former Defense Secretaries Casper Weinberger and Chuck Hagel, former Secretary of State James Baker and former Congressman Ron Paul have all made statements critical of Israel), anti-Israelism has found a more welcoming home in the Democratic Party and among the American left. Former President Jimmy Carter, for example, published a book in 2006 accusing Israel of practicing “apartheid,” legitimizing such language in mainstream Democratic Party circles, as Secretary Kerry has demonstrated.

The following year Professors Stephen Walt and John Mearshiemer published a book arguing that supporting Israel was not in America’s interest, lending mainstream academic credibility to the anti-Israel movement. And former Los Angeles Mayor Antonio Villaraigosa was nearly shouted down at the 2012 Democratic National Convention when he introduced a resolution adding a plank to the party Platform recognizing Jerusalem as the capital of Israel. One can only wonder what will happen at the upcoming 2016 Democratic convention.

This steady drumbeat of anti-Israelism has accelerated since Mr. Obama’s inauguration, seeping into the Democratic consciousness and increasingly forming an element of the mainstream Democratic Party’s worldview. According to a recent Frank Luntz poll, nearly half of all Democrats now view Israel as a “racist” country, less than half believe Israel wants peace with its neighbors, and most now support the Palestinian side of the conflict.

The cold reality is that Israel has become a wedge issue in American politics. American Jews in recent years have embraced the Democratic Party’s increasingly leftward, “progressive” politics, including laudable policies on health care reform, same-sex marriage, and immigration reform, but also have acquiesced in the seriously misguided progressive view of Israel as the sole wrongdoer in the Palestinian conflict. As long as Israel’s survival does not appear to be imminently threatened (as in 1967 and 1973), many American Jews seem willing to go along (or at least unwilling to disagree) with the progressive narrative denouncing Israel as the aggressor, the occupier, the apartheid state-in the-making, the troublemaker standing in the way of welcoming Iran back into the waiting arms of the forgiving West.

In fairness, many American Jews harbor well-founded and legitimate concerns about the occupation and Israeli settlement activity under Prime Minister Netanyahu. Many American Jews are unhappy with the way the prime minister has handled the peace process (or the lack thereof), and are frustrated with the way he has managed his relationship with President Obama. Most American Jews would side with the Zionist Camp or Yesh Atid if they could vote in Israel.

But the Iran nuclear deal has nothing to do with any of those concerns — not the occupation, or the settlements, or the many policy disagreements between Netanyahu and his opposition parties. American Jews should have been able to separate their distaste for Prime Minister Netanyahu and his policies from the fundamental threat to Israel posed by the Iran deal. That’s exactly what Herzog and Lapid did in joining Netanyahu to oppose the deal. And that’s exactly what the vast majority of American Jews failed to do.

The Iran deal thus comes at a pivotal moment. With the 2016 election campaign now in full swing, American Jews who are Democrats must pull their party back toward Israel, and those who are Republicans should voice their continued staunch support for Israel. With the Iran deal just now implemented, overseas corporations are already rushing to earn profits from Iran (posing concomitant dangers to the commercial interests of US manufacturers), with no lessening of Iran’s support for terrorism and its desire to wipe Israel off the map.

Year after year, Israel remains the bulwark of not only Jewish interests globally, but also US interests in the Middle East. Israel’s long-term survival thus depends upon strong bi-partisan backing from both Republicans and Democrats. We need to demand that candidates in both parties reject the effort to treat Israel as a partisan issue, and focus instead on the shared interests of the United States, Israel and our Arab allies in preventing a nuclearized, terror-sponsoring Iran.

But most fundamentally, American Jews need to look in the mirror and ask ourselves whether Israel can continue to count on us for support. Because if not, we will share the blame when Iran successfully tests a nuclear warhead in a few short years.

About the Author
Steven E. Zipperstein teaches at UCLA, UC Santa Barbara and Tel Aviv University. He is the author of Zionism, Palestinian Nationalism and the Law: 1939-1948 (Routledge, 2021) and Law and the Arab-Israeli Conflict: The Trials of Palestine (Routledge, 2020).
Comments