American Jews have not yet learned the lessons being beaten (all too literally) into the heads of Jews from the Ukraine and France: violent Antisemitism is alive and well. The failure of the Western aliyah movement, particularly in terms of those affiliated with strains of Judaism stressing the primal importance of Israel’s existence, underscores the lack of urgency permeating Jewish America.

When I read the Times of Israel article covering the couple in New York who named their baby after the Druze guard killed recently during the attack on a synagogue in the Har Nof neighborhood, I immediately thought ‘what a simple and ultimately empty gesture.’ 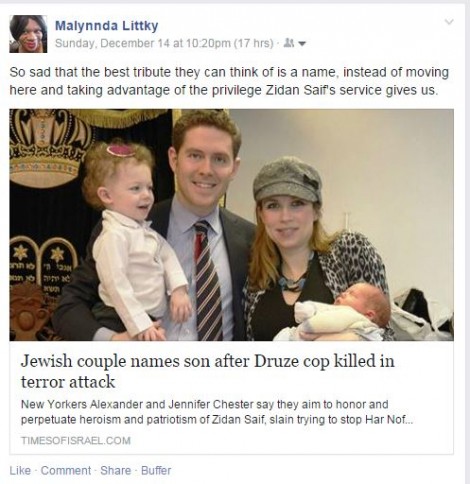 One commenter chastised me for judging the couple since ‘There are many people who cannot or choose not to make Aliyah at any given point in time. Everyone has their reasons.’

Of course that’s the problem, isn’t it? Somehow, 99% of American Jews have their reasons. A group of people known so much for being contrary that the phrase “two Jews, three opinions” elicits little more than a complacent shrug, but the vast majority have all agreed that there is something insurmountable keeping them from being able to move to Israel.

Family, money, danger, all cited as barriers to making a successful Aliyah. Yet, if there were a credible threat against the Jews in America, how many of that 99% would still refuse to come? If you believed the only way to survive as a Jew was to move from America to Israel, would you still decide it is better to be a corporate real estate attorney in New York? Or would you be pulling every string you had to guarantee a place on a plane to safety?

For too much of American Jewry, Israel remains a fantasy land where you can easily escape ‘if chas v’shalom, things ever get too bad here…’ Ironically, the prospect of planning to live within the borders of the Promised Land of their own free will means less to them than it does to our Arab neighbors, who are willing to die (and sadly, kill) to take control of it. Defending Israel in the eyes of the comfortable American Jew means telling anti-Semites to stop harassing Jewish kids on college campuses, instead of telling Jewish college kids to make Aliyah and get a free education on Israeli soil.

It means naming your child after the man who died to protect your inheritance, and then holding a Chinese auction to raise funds for his widow, instead of taking possession of your homeland.

One of the charges that has been leveled against the Jewish population in nearly every nation in which they have gathered is that of their potential to form a “fifth column”, engaging in acts intended to promote the betterment of the Jewish people at the expense of their home countries. In America, it appears that this is unlikely to ever be a realized fear. As long as Israelis are willing to continue contributing the martyrs, the Jews of America will be satisfied with having more baby names.