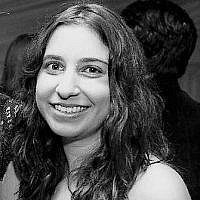 The Blogs
Anya Osen
Apply for a Blog
Please note that the posts on The Blogs are contributed by third parties. The opinions, facts and any media content in them are presented solely by the authors, and neither The Times of Israel nor its partners assume any responsibility for them. Please contact us in case of abuse. In case of abuse,
Report this post.

Exeter is a great university and aside from the occasional gripe about teaching, my university experience has been relatively uneventful – that is, until the election of Malia Bouattia last year.

Ms Bouattia’s election seems to have heralded an age of acceptable anti-Semitism on university campuses across the country, and mine has not been untouched.

The Snowsports social last term seemed to mark the beginning of the anti-Semitism on campus. Somewhat uncommonly, nobody could claim that this was mere anti-Zionism – this was anti-Semitism through and through.

Writing ‘the Holocaust was a good time’ on a t-shirt is not something I consider to be acceptable ‘banter’ – either way, whether it is banter or not, it shows how little we actually think about what we are saying.

Although I was not present at the social, reading about it the next day made me feel physically ill.

Before this, I had not considered anti-Semitism to be anything other than an online nuisance for me; never before had it spilled over into the real world.

The alcohol and anonymity provided the perfect cover for normally concealed racism.

The swastika drawn at a university hall a few weeks ago provided further fuel for the fire.

The university did nothing to uncover the perpetrators – in fact, they seemed far more upset by the incident appearing in national newspapers than by the racism that appeared on campus.

Neither of these incidents has alarmed me so much as the election of Malaka Shwaikh into the Student Guild.

She is a woman who has proudly claimed to be ‘a terrorist’, a woman who celebrated the murder of three Israeli Jews, and a woman who compares Zionism to Nazism. She has been allowed to stand uncontested and win three separate positions within the Guild.

If that wasn’t scary enough, she’s employed as a teaching assistant at the university, who claim it isn’t their problem; the Guild don’t seem to be doing anything at all.

The thing is, I know that these are the actions and words of an exceedingly vocal minority.

My friends would never hold such opinions and tend to agree with me on the subject of Israel.

The problem is that the majority are silent.

There is a mentality of ‘it doesn’t affect me’ and ‘I don’t want to get involved’ that needs to be combatted at Exeter, with Jews and non-Jews alike working together to defeat the forces of anti-Semitism.

The fact that my fellow students could elect a woman such as this scares me.

I now feel uncomfortable at my own university; I feel unwelcome on my own campus.

Malaka herself is now claiming that she is the victim of an Islamophobic smear campaign, and that she is scared to talk about her politics.

Well honestly Malaka, try being a Jew on campus and you’ll see what real fear is.