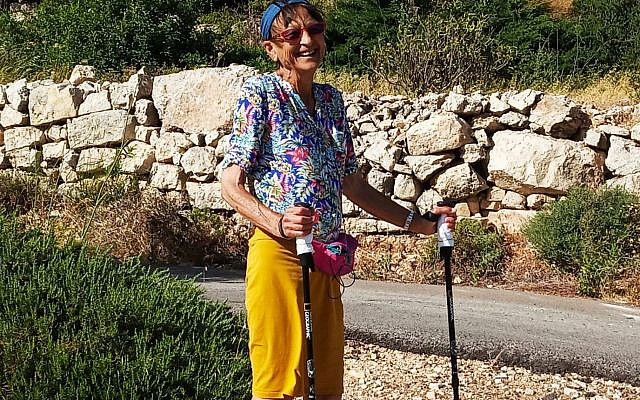 We are each given a unique life to lead, and our beloved friend Esther Caplin, z”l, lived hers with astonishing grace, joy, and impact.

Esther asked for no eulogies, and instead left us all a positive and life-affirming poem, which her daughter read at her levaya this week. Many beautiful words about her were and will be said – a drop in a vast ocean of impressions and experiences.

Here are some of the extraordinary things that I will always remember about Esther, which I write with brevity, optimism and gratitude, as she would have wanted.

Esther was born the same year as the State of Israel. She and her husband Shane adopted six children from Canada and Israel, including 3 siblings.

They made Aliyah, and while moving into the home they built in Neve Daniel in 1990 – one essential anecdote from those years – Esther went to helped a newly-arrived family of Olim from Moscow unpack in their caravan. After hearing familiar names and noticing a very familiar address on their boxes, she ran home to dig out letters from the Russian refusenik families that she had corresponded with while still in Canada.

Alas, the addresses matched! When she came back to the new family’s caravan waving the letters, Luba Mishkov ran and brought out the Challah recipe that Esther had sent her, in darker times, many years before, when neither dreamed of meeting and becoming neighbors, in Eretz Yisrael.

So Esther inspired and freed Soviet Jewry, but not only.

As a beloved English teacher, neighbor, and friend, Esther helped hundreds of children, and adults, believe in their own tremendous worth and abilities. During the Shiva, we leafed through some of the original poems and stories that she wrote for her students and dear family.

She created so many tricks to make learning moving and exciting, like lowering English words and clues on a string to her grandchildren in their apartment below. And how she reprimanded me once for suggesting that young Leetal find the edges of her puzzle first. “Let her experiment and build the puzzle her way!”

Esther was my children’s friend as much as she was my own.

She was an avid biker, until an accident abruptly ended her long, cherished trips on two wheels, after which she reminded everyone that her helmet had saved her life. Then Esther took up walking, leading a group of us mostly younger women friends panting behind her, as she sped up and down the hills of Neve Daniel.

When she was shockingly diagnosed with 4th stage breast cancer over 6 years ago, she literally became “walking proof” of the power of mind over body, waking up every day during her chemotherapy treatments at 6 a.m. to go on long walks, observe the Fibonacci patterns/ miracles of nature and the beauty of Israel that so moved her and that she loved to share with others. She never gave in to her tiredness, and never cancelled an English lesson during the treatments.

She was in cahoots with her oncologists and nurses, all angels, in her words, who worked so hard. “Next time,” she’d tell them, “let me fill in the numbers of the test results!” And she told me of the poor, nervous medical student who had to perform his first breast exam on her. “He found them!” she called to the doctor on the other side of the curtain. “That was so cruel of me!”

Esther – you outlived every medical expectation, and you won your battle to get Ibrance covered by medical insurance in Israel, helping countless other cancer patients.

Esther – you raised the most incredible children and grandchildren, whose values reflect your light.

Esther – whose very name recalls courage and royalty. With all your English accent and upbringing, humility, kindness, and humor- and order – were the utmost proper behaviors in your eyes.

Your were Esther bat Miriam, like the prophetess who raised up thousands of people with her vision, song, wisdom, warmth and faith in God and each of us.

You will always be the ladder firmly planted in the ground, connecting heaven and earth, which Jacob – and all Am Yisrael – dream about this week.

You will always be one of those Divine angels, who ascended and descended – and reascended – this ladder, and brought so much blessing to our world.

Thank you and love you, dear Esther.