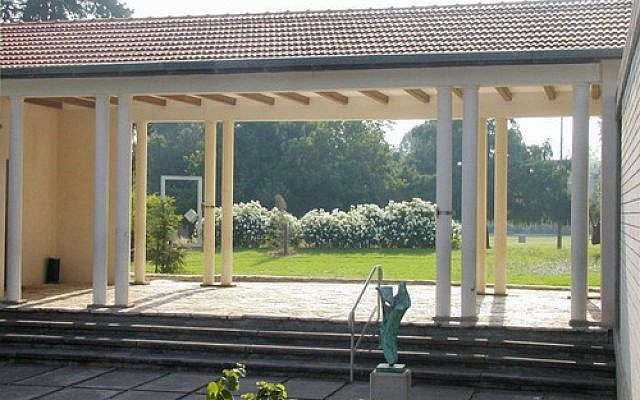 Portico of the Wilfrid Israel Museum, Kibbutz Hazore'a, which was robbed and vandalized this week (museum website)

Kibbutz Hazore’a, at the feet of the Carmel ridge in the Jezreel Valley of northern Israel, was founded in 1936 by young Jewish socialists from Germany who were attracted to Zionism by the rise of the Nazis to power. One of their patrons was Wilfrid Israel, the scion of a wealthy Berlin business family and an ardent pacifist who became a hero of the effort to rescue Jewish children from the impending Holocaust. After his plane was shot down by the Luftwaffe in 1943, Hazore’a inherited Wilfrid’s invaluable collection of East Asian art. In 1951, this treasure formed the core of a new museum — whose modest but inspiring architecture embodied the kibbutz’s commitment to culture even at the height of the new State of Israel’s austerity.

Since then the original collection was enriched by further donations of Asian artifacts, but no less outstandingly the museum undertook an important role in fostering contemporary art from all walks of Israeli life through a range of programs. It was for one of these shows that I first visited the museum almost 50 years ago, and was enchanted by this relatively unknown gem. For most Israeli, the name Hazore’a is better known for its furniture factory that pioneered modern design and still retains the prestigious trademark’ though it was since privatized — as was recently the kibbutz itself, while commendably maintaining its crown jewel, the museum.

So I was appalled to learn that in the wee hours of 19 August, the hall that housed the Wilfrid Israel Museum’s permanent collection of Asian art was broken into and many of its priceless exhibits stolen. The perpetrators smashed a lot of what they couldn’t take. To its credit, Times of Israel reported the robbery, but the story hardly made a ripple in the present  maelstrom of medical, political and military news — as well as the outcry over the decimation of Israel’s performing arts by the coronavirus crisis. I happened to find out about the museum’s loss just because its present director, Nurit Asher Fenig, is the daughter of a classmate. She and her colleagues have been able to continue their contemporary-art activity, as these exhibits were not affected. But the devastation to the core collection and its home is immeasurable, and as Nurit herself put it, ‘”the sense of violence and evil” is even worse.

The museum has posted a catalogue of the stolen items and appeals for maximum dissemination to help in preventing their sale and, perhaps, retrieving them. A fundraising initiative has also been launched to assist in repairing the damage.  Please visit the museum website and contact the management to find out how you can pitch in, or let them know of any relevant  information you may have. This cause combines so many central values of Israeli, Jewish and universally human heritage that it merits all the attention it can get! .