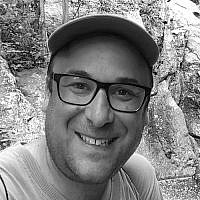 The Blogs
Adam Goodvach
Apply for a Blog
Advertisement
Please note that the posts on The Blogs are contributed by third parties. The opinions, facts and any media content in them are presented solely by the authors, and neither The Times of Israel nor its partners assume any responsibility for them. Please contact us in case of abuse. In case of abuse,
Report this post. 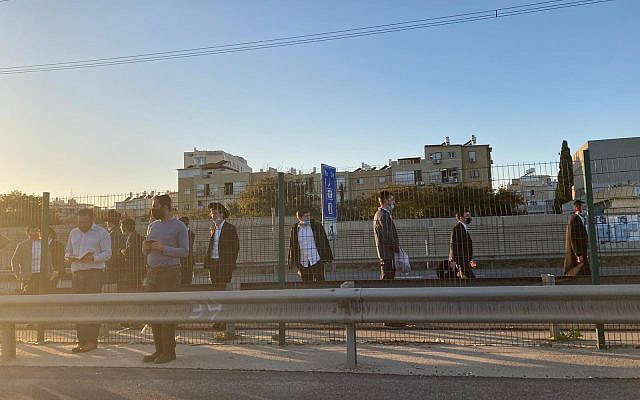 The captors / captives join together for an impromptu prayer service. Your author (far left), white shirt.

For the first time in ten years, I wondered if it was time to leave Israel. Divisions across Israeli society have never seemed as stark as today, and my ability to connect with the diverse segments of Israeli society has never been as tested. My anger and frustration burst forth and those around me responded, not by reflecting back my fury, but with warmth. Sometimes we have to dig for meaning in unfortunate situations and sometimes meaning is standing on the road in front us.

On Saturday night, my drive into Jerusalem took an extra 40 minutes because protesters blocked the roads outside the national police headquarters. These radical settlers, so called Hilltop Youth, were protesting that someone who threw stones at Arabs and was killed in a car crash while fleeing the police. The protest was violent and I found myself 50 meters away from a battery of spraying water cannons. I find the protesters’ disdain for law and order, not to mention their Arab neighbors, completely unrelatable. These are my people, but it didn’t feel like it.

I don’t usually enter Jerusalem from this direction but I was redirected this way due to the mass protests outside Prime Minister Binyamin Netanyahu’s house. Even in an ancient city, protest and free-speech must be allowed but blocking even minor roads can make travelling frustrating and needlessly time consuming. How do these people justify such inconsiderate behavior? They simply don’t feel for me or other innocents impacted by their protests.

Ignoring Waze, I drove down the small streets of the Haredi neighborhoods. Of the 50% of people wearing masks, about half of them protected only their chins.  Are a million dead insufficient to convince them that we are in a pandemic? The Torah I read demands respect for human life above all else; even above other laws of the Torah. Again, I wondered if these people are really my people.

Finally, as I exited Jerusalem the next day and reached Bnei Brak, I hit my third protest-induced traffic jam in less than 24 hours. (Do I get ice-cream for this?) In a country with the wealth to earn OECD membership, the legal system to jail presidents and organizational capacity to inoculate the population at a pace which is the envy of the world, how can my 1-hour drive take me 6 hours due to people blocking the streets.

Blocking roads is illegal and everything needs to be done to stop it from happening. When it first happened with disabled protesters, my harsh view was rejected by friends and family who encouraged me to have sympathy for disabled people. Then the Ethiopians seemed to garner less sympathy and the haredim even less. On the road yesterday, when people asked “Where are the police?” I asked, “Where are the bulldozers?”

The captors / captives join together for an impromptu prayer service. Your author (far left), white shirt.

As I watched 1,000s of cars back up in both directions on Road 4 I felt like I was being taken hostage yet again. The haredim were complaining about being forced to join an army that protects them, while my family gets ready to offer my children for service. After 30 minutes with my car engine turned off and no battery power on my phone (adding insult to injury!), I knew the protesters were my people but it didn’t feel much like it.

I erupted at the Haredim who walked (north) down an empty Road 4 towards the protest on the south side of the road. They protest in the name of religious observance but, instead, they create a Chilul Hashem (desecrating (chillul) the name (Hashem) of G-d).  I yelled at them – imploring them to tell me how I was supposed to say Kaddish for my mother while I was stuck in a traffic jam. These pious people are causing havoc in the lives of people they don’t know. Some of my fellow hostages were sick; an ambulance treated at least one of my fellow hostages. Were people going to miss hospital appointments, weddings, funerals Children were left waiting to be picked up or fed? Toilets???

Some Haredim mockingly invited me to join the protest so I could find a minyan (quorum) for Kaddish. Another told me not to blame him because ‘these people are not my friends’. My frustration grew when I heard a group of young boys laughing as they walked along the road. I could not believe that they were laughing at the suffering of 1,000s of their fellow citizens and fellow Jews. Again I erupted “I have to say Kaddish. You laugh while I’m trapped.” The laughing boy stopped, turned to me, “You have to say Kaddish?” He looked to his group of friends, nodded and started yelling, Kotel style, “Min-che, min-che” to attract people to prayer.

A religious many emerged from the trapped cars and put up his hand. But we lacked a 10th man. Some big guy in army pants berated us for praying at a time like this; especially with the Haredim who are responsible for us being trapped. Someone mentioned Kaddish and his face changed. He said directly to me “You’re saying Kaddish? You need one more? Wait while I grab a kippah from my car.”

I retrieved a siddur (prayer book) from my car and the Haredi boys invited me to lead the prayers. I said that, unfortunately, my abilities to pray were limited so he immediately started the prayer service. There was not just a physical fence separating us from the Haredi group. We were separated by ideology, politics, religious observance and at least 20 years. But I realized that while it didn’t feel like these were my people, they really all were.

About the Author
After making aliyah from Australia ten years ago, I have built a real life here with my wife and kids. Originally a lawyer and then high-tech entrepreneur, I have worked in the real worlds of Israeli tech and finance. This blog is about my observations on life in Israel from the point of view of someone who appreciates the small miracles in everyday life that are often hidden by the larger frustrations.
Related Topics
Related Posts
Comments