Elections could not have come at a worse time for Israel’s Center-Left.  After having been abandoned and sold down the river by our chosen leadership, in what can only be described as unconscionable betrayal, we have been left shattered and disillusioned.

Ganz managed to achieve in one selfish, precipitous decision what Menachem Begin wished for and what Netanyahu has worked for decades to achieve. For three rounds of the elections, we stood together, resolute like an impenetrable rock wall. And then on March 26, 2020, despite having the advantage of a majority that could have wrested from Netanyahu the legislative initiative, Benny Ganz took a hydraulic excavator to that wall and proceeded to pulverize us into a pile of pebbles. And then Peretz and Shmuli confirmed the “kill”.

It seems that the transition from self-belief and hope on the one hand, to despair and disillusionment on the other, is lightning-quick when he who leads you betrays you so treacherously and so unapologetically. It is the same when a person who experiences an earthquake, can no longer fully rely on the ground beneath his feet.

We were left stunned, with no leadership, and deprived of any faith in anyone who stands before us, asking to lead us, to become our messiah de jour. Now, we don’t trust anyone.

What we needed, more than anything else was time. Time to rehabilitate. Time to rebuild from the roots up. Time for genuine leadership to emerge from among us, from within our ranks. And, it seems that we were beginning to do that: The protest movement against Netanyahu’s corruption and refusal to resign, gave me encouragement that we were beginning the process of building something new, something fresh, something to coalesce around, something vital. Here was proof that the Left, or the Center-Left, had not disappeared. We were still here, and we were vibrant! The determination of the protestors who persist, week after week at Balfour or on the bridges, resolutely defiant against the intimidatory tactics of the Police, filled me with a sense of optimism that yes, we the Center-Left could rise from the ashes of despair after we were deserted by our generals. I began to dare to believe that “next time”, perhaps we could come back stronger. 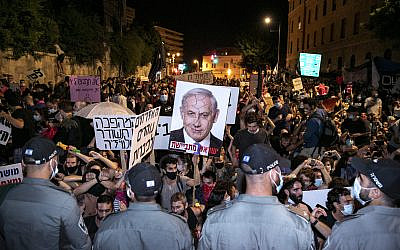 And then, once again, Ganz and co. pulled the rug out from under our feet.

By forcing another round of elections after only six months, he cut this process short.

He released the pressure of the protests by forcing a change of focus onto the elections.

He injected new energy into Netanyahu, who thrives on election campaigns, and allowed him to use the acquisition of the vaccines and their successful administration to the public, to his political advantage.

He forced us into battle before we were ready. And thus, once again he succeeded in doing what Netanyahu couldn’t. He virtually ensured we would lose.

He broke us down while we were in the process of rebuilding.

It boggles the mind that a former IDF Chief of Staff, with at least some skill in strategic thinking, who knows that the first thing a general does before choosing to go into battle, is to gauge the condition of his troops, has proven that he has the political-strategic aptitude of a clown. Twice.

The result is what we see today: With less than one week before the party lists close, we have no less than six political parties splitting our vote. As a result, except for Yesh Atid, none are guaranteed to pass the electoral threshold. 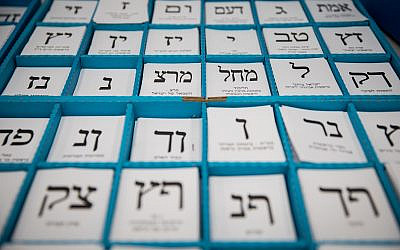 So many parties. with no less than six parties vying for the Center-Left vote, there is a danger that none will pass the electoral threshold. Courtesy of Times of Israel. (Hadas Parush/Flash90).

If anything, this is a sign that we cannot identify with any single party, that they fail to represent us and what we want. They may share with us the same core values, even the same political beliefs, but they excite us about as much as a bowl of cold porridge does. And, seemingly unaware of our lack of confidence in them, each presumptive leader is egotistically pulling in his or her own direction, highlighting what makes him/her different from the others. Instead, they should be looking for what unites them all, what unites us. Because that is the only thing that is going to rebuild our resolve.

There is a strong feeling that we have nobody to vote for.

And do you know what happens when people feel they have no one to vote for? They don’t vote. And then we would have an entire Knesset term without a Center-Left representation that is proportionate to our representation in Israeli society.

I call upon all the presumptive party leaders — Yair Lapid, Merav Michaeli, Huldai, Nissankorn, Zeliha, Horwitz, Shelah, and Ayman Odeh: Please understand that after we were betrayed and deserted and because we were left abandoned by the leadership in whom we placed all our trust, and upon whom we pinned all our hopes, we are suspicious of anyone who presumes to lead us. We are wary of all those who ask us to trust them. This is an open wound that has not yet healed because we were given no time for it to heal.

Understand that we are tired of a system that allows representatives to “own “ our votes and do with them whatever they want once they have been cast. In the last election, our votes were usurped and in so doing, we were deprived of our voice, our agency.

We want leaders who emerge from among us. If we cannot have that and you want our support, you need to earn our trust, by proving your commitment to serve and to represent us. Not your personal ambitions. Us.

And the way to prove that is to unite.

Give us a party to vote for; not fragments from splintered factions or other parties’ cast-offs, but one coalition based on shared values, with a commitment to remain loyal and to respect our voice. Commit to work for us and to be our emissaries, not just our representatives.

Do that, and you will have given us someone to vote for.

Then you will get my vote.