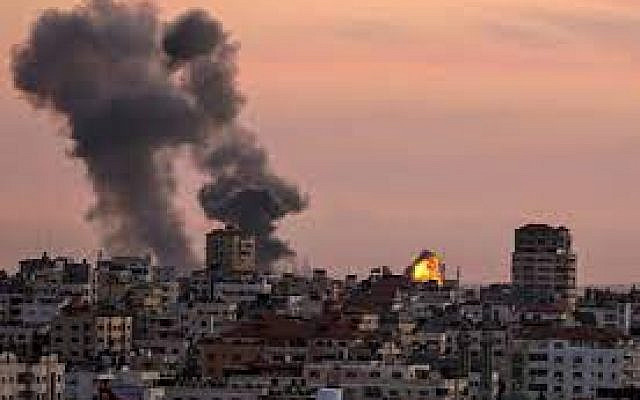 Illustrative: Smoke billows from a Palestinian Islamic Jihad position near Gaza City after Israeli aircraft bombed it on November 30, 2017, in retaliation for a mortar attack that targeted Israeli troops northeast of the Gaza Strip earlier in the day. (Mahmud Hams/AFP/File)

Since many of you have written to us and expressed solidarity and support and asked how we are doing, I am writing this open letter to all of you.

First, of all, we are doing fine. Everyone in our family in Jerusalem is OK. We were all shook up a bit when the rockets hit Jerusalem last Sunday and we also had to go into our protected rooms in our apartments for a few minutes, but since then there have been no rocket attacks in Jerusalem.

But we are very concerned about the escalation of the war with the Hamas regime in Gaza. It is counterproductive and will get us nowhere in the end. The Hamas and Islamic Jihad organizations have been very brazen and provocative in launching hundreds of rockets into many places in southern and central Israel.  By inflicting some damage and succeeding in killing 7 Israelis so far, they have managed to provoke a very strong reaction in Israel, which in the end is very harmful to their own people.

In response, the Israel Air Force is conducting hundreds of bombing raids and causing massive damage in Gaza, in an effort to get Hamas to stop firing their rockets into Israel. As usual, it is disproportionate to the damage inflicted in Israel, and will cause more humanitarian problems in Gaza, probably de-stabilizing the situation even more.

It would have been much better if Israel had offered vaccines for the COVID-19 pandemic to all the Palestinians in Gaza (and the West Bank) months ago, thus showing some humanitarian concern for the people who live there. It would also have been helpful if the Israeli police had not used so much force against Palestinians in Jerusalem — in the Sheikh Jarrah neighborhood, where Palestinians are facing evictions from their homes, and on the Temple Mount, Haram El Sharif, during the month of Ramadan. Who could possibly have given the go-ahead to the police to enter the Al Aqsa Mosque? These serious mistakes by the Israeli police, guided by a very right-wing Minister of Internal Security, coached by Prime Minister Netanyahu ,who has lost his moral and political compass, due to his political and personal problems.

Within Israel, there are many right-wing unrealistic dangerous people calling for all-out war on Hamas, as if this would solve the situation, as if this war is winnable. And now the Israeli government — led by Netanyahu, who is on the verge of being replaced finally by a “government of change”– is thinking about approving a ground invasion.

For 18 years, Israel was stuck in the mud in Lebanon and finally had to withdraw. For the last 15 years, we are stuck in the Gaza mud. And all that our governments can come up with is more military force as a solution. Our political and military leaders are stuck with old conceptions of how to resolve or manage our conflict. We need new approaches, including negotiations to reach peace with our neighbors. Ongoing wars are not solving the problem. We also need to face the frustrations and anger of the Palestinian Arabs who are citizens, as a result of so many years of discrimination in government policies.

In addition, we are witnessing a great deal of rioting in mixed Arab-Jewish cities all over Israel — Lod, Ramla, Haifa, Acre, and others. Much of it is associated with Jewish thugs, who are connected to extreme right-wing groups such as La Familia (yes, this is in Israel, not in Italy) and Lahava (the flame), a very dangerous, violent and fanatical group, whose supporters are present in much of the rioting and attempted attacks against innocent Arab Israeli citizens.  These groups are a clear and present danger within Israeli society, but the government and the police treat them with kids’ gloves, in stark contrast to the way they treat Palestinians who engage in rioting.

Much of this can be traced to the extreme right-wing parties which are now in the Knesset, about which I wrote in my last blog post. They have been brought into the mainstream by Bibi and his Likud party, for their personal and political survival, in a rash move that is causing much havoc in Israel now. All of this is upsetting the very gentle fabric of Arab-Jewish coexistence in Israel.  Not only has the Likud and the far-right brought another disastrous war upon us — and upon the citizens of Gaza — but they are now inflicting a civil war upon us. Their racist and discriminatory policies of many years are finally boiling over into very serious internal and external crises in Israel and the region.

We are not hearing many voices of sanity and serenity within Israel lately. Instead, the “leaders” in the government, the army and the police are calling for an “iron fist” to quell the rioting all over Israel, which will undoubtedly make things much worse. At the same time, they are expanding the military campaign against Gaza.  In fact, many retired generals are calling for a military solution.

We are on a very slippery slope in Israel right now, and therefore we are quite worried.

Hopefully, we will get some help from saner people in the international community who see the futility of the current war and will help arrange a cease-fire, the sooner the better. President Biden has sent an envoy to the region to try to help with negotiations towards this goal.   Lots of good people are working on this, but so far both Israeli and Hamas leaders are resistant.  But they can be forced to cooperate, with lots of international pressure.

It would be good if this senseless round of mutual destruction would end right away. And then we can go back to forming a new government without Netanyahu and his extreme right-wing cohorts.  We need a sane, responsible, centrist government as soon as possible, to help restore calm to Israel and the region and to deal with our internal and external crises effectively and reasonably.

In the meantime, as the psalmist wrote: “Pray for the peace of Jerusalem.”