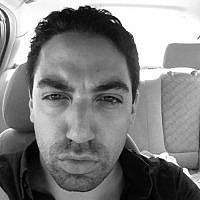 The Blogs
Bernard Bohbot
Apply for a Blog
Please note that the posts on The Blogs are contributed by third parties. The opinions, facts and any media content in them are presented solely by the authors, and neither The Times of Israel nor its partners assume any responsibility for them. Please contact us in case of abuse. In case of abuse,
Report this post.

For a couple of years now, Gideon Levy has decided to talk less about the occupation and more about Zionism, which he sees as a “racist” ideology that should be forsaken with the dismantling of its illegitimate child: the State of Israel.

This kind of language is not uncommon among far-left students and tenured-radicals in Western universities. However, this kind of rhetoric is much more surprising when it comes from someone like Gideon Levy, who owes his life to Zionism.

So here is my question for Gideon Levy: What were the Jews supposed to do in order to save their lives if you believe that setting foot in Palestine was a crime?

Perhaps it would be useful to remind Gideon Levy that most of the Jews who went to Palestine were refugees who had nowhere else to go. In Central and Eastern Europe, they were persecuted, while Western countries decided to close their doors to Jewish immigrants. Hence, Palestine was no longer a choice; it was an existential necessity for hundreds of thousands of Jews.

Just in case Gideon Levy has forgotten basic facts, he should be reminded that thanks to Zionism, close to 500,000 were not exterminated during the Holocaust, among whom figured an eminent jurist, Heinz Loewy – Gideon Levy’s father.

If Levy believes that the Jews should have died rather than setting foot in a land already inhabited by another people, he should say so openly.

Usually, Gideon Levy and his anti-Zionist friends are not so cruel. They prefer to imagine unlikely scenarios to keep justifying their rabid anti-Zionism. For instance, left-wing anti-Zionists like to say that the Jews should have built their State in Europe instead since it was the Europeans who inflicted the worst suffering on the Jewish people. They just don’t seem to understand that these Europeans who persecuted their Jews would never have allocated them a part of their land.

Some argue that Germany was so discredited after the Holocaust that it would have been easy to convince the international community to carve out a piece of Germany and give it to the Jews. Yet, these people fail to understand that in 1947, there were already more than 600,000 Jews living in Palestine – most of them having settled before the genocide. Should they have been displaced once again and sent to the graveyards of their families? It is quite strange for people who blame Israel of the forced displacement of the Palestinians to argue that the Jews should have been displaced twice in their lives.

It is also noteworthy that in the late 1940s, no one could have had predicted that anti-Semitism would recede so much in the second part of the 20th Century. In fact, Western countries refused to absorb most Holocaust survivors and let them rot in displaced persons camps until the creation of Israel. Hence, given the context, it was not at all eccentric to believe that the only way of ensuring the Jews’ safety was for them to have their own nation-State.

Furthermore, if all peoples are entitled to self-determination, it is legitimate for a homeless nation to want to return to (part) of its ancient homeland. True, depriving the Palestinians of part of their land is an injustice. However, leaving the Jews homeless is also an injustice. Nevertheless, dividing the land is the only way to prevent a people from ruling the other. Israel’s first president Chaim Weizmann referred to this solution as “the line of the least injustice”. Anyhow, Jews had no other choice but to find shelter in Palestine.

Gideon Levy will probably answer to all these dilemmas by saying that nothing justifies the forced displacement of more than 700,000 Palestinians during the First Arab-Israeli war. True. The Zionist endeavour was just, but Zionists perpetrated crimes along the way. However, Gideon Levy must also acknowledge that the Palestinians started this war and that in every area of Palestine where Arab forces won battles, every single Jew was expelled. Overall, 10% of Israeli Jews were evicted from their homes. He must also recognize that 1% of the Israeli population, and close to 10% of Israelis aged between 18-21 were killed in the course of this war. Claiming that the exodus of the Palestinians was a unilateral expulsion that happened out of the blue is sheer nonsense.

And what about the occupation? The occupation of the West Bank is profoundly unjust and the Palestinians deserve a state of their own as well. However, Gideon Levy cannot disregard the fact that the Palestinians have destroyed the Israeli left with the Second intifada and Hamas’ rockets. Israelis did not move to the right without reason. The sense of insecurity that increased since the mid 90s contributed to this phenomenon. Furthermore, Levy cannot deny that the Palestinians have rejected peace plans that would have allowed them to recover almost all of the West Bank (including the 2014 Kerry/Obama peace plan).

I am not arguing that Palestinian anti-Zionism is not understandable. After all, the Palestinians were also, indirectly, victims of European anti-Semitism and the expulsion of European Jews. However, like most left-wing Zionists, I am just asking Gideon Levy to be more nuanced and to show more respect for Zionism, the political movement that saved his parents’ lives – and his own life as well. If that is too much for Gideon Levy, perhaps it is about time to stop reading his rants.

About the Author
I'm a History P.h.D. student, working on the complicated relations between the Jews and the left. I'm also involved with various liberal Zionist movements.
Comments