When I first heard you speaking to the media during operation Pillar of Smoke, I thought you were brilliant. This guy really has his head on straight, I thought to myself. When I heard you were the head of the Bayit Yehudi party, and were running for the Knesset, I immediately told everyone, announced to all my hundreds of friends on Facebook, that I would be voting for Naftali Bennett. Not Bayit Yehudi. I didn’t care about the party. No matter which party you were running for, I knew I’d be voting for you.

Everything you said resonated well with me. You sounded like a good, caring person who cared deeply about Judaism, and also deeply cared about the good of the Jewish people as a whole, wouldn’t let people walk all over you, and were trying to create Ahavat Yisrael between the Jewish people.

I was totally enamored by you, and was petitioning everyone I knew to vote for you.

When Chareidi rabbis came out and said that voting for you is a danger to Chareidim, that Bennett and his friends are dangerous to the Torah observant population, you made public statements reassuring Chareidim that you’re not…

…You came out with a public statement saying that you’re not trying to damage chareidi society, that you’re our brother and you want to work things out with us, not force us to change our lifestyle.

And I believed you. I really did. I thought Finally, a guy who isn’t Chareidi that still respects that the Chareidim have a right to their own way of life, without anyone trying to force them to change.

And I was going to vote for you. And was campaigning for you hard.

But a friend of mine started showing me inconsistencies with your campaign, that showed us that maybe these words that you put out were belying your true intention, that you really did intend to try to force change in Israeli Chareidi society.

Up until 5 minutes before the elections, I still wasn’t sure who I’d vote for. When it came time to put my ballot in the box, I had my reservations, said I’d feel guilty if I voted for you and you ended up screwing over the Chareidim that you promised you wouldn’t, and my vote went for someone else.

My husband voted for you, and was trying to tell me that I should have done so too, that my concerns were unfounded…

But when I saw that you teamed up with Yair Lapid, and that his rule for entering the government was “No Chareidim in the government”, I knew I was right. You didn’t plan on looking out for the feelings of the Chareidim. The Rabbis were right when they warned people not to vote for you.

Naftali Bennett, I know you’re a man with the best of intentions.

I know you’re a God fearing man, and that’s why many voted for you.

I know that you care about following the mitzvos and looking out for the needs and desires of the Dati Leumi public, who voted you into power.

I know you’re a man of integrity, who does what he thinks is right, even when the world is booing you.

You have been given an amazing opportunity as the Minister of Religious Affairs in Israel, an opportunity to show the religious people that you are looking out for their interests, and to prove to the Chareidi world that you’re not an “enemy of Torah”.

You were given the opportunity to draft new legislation concerning the Kotel and Women of the Wall, after Judge Sobell’s ridiculous ruling about the interpretation of the Supreme Court’s ruling pretty much made the Kotel an “anything goes” place, instead of one respectful of religion and the people coming to pray there.

Please, Naftali Bennett, draft new legislation, clear legislation, about what is permitted at the Kotel and what is not, not something “ambiguous” like “minhag hamakom” (the custom of the place) and “not hurting the feelings of other worshipers there” that people like Judge Sobell can interpret to mean whatever suits their agenda.

So far, you’ve met with the Women of the Wall to try to find a compromise. But when you try to find a compromise, it’s very important that you listen to both sides. Right now, it seems you’ve only been listening to one side, the side of a very small minority, a group of 100 or so women who are trying to change things at the Kotel and trying to change religious life in general in Israel.

On Friday, May 10th, Women For the Wall, the group that was started by myself, a Chareidi, and 2 Dati Leumi women, managed to bring out over 10,000 women and girls to the Kotel to show that we feel strongly about keeping the Kotel a place respectful of Jewish tradition, a place where all Jews can feel comfortable praying. We have support from across the religious spectrum in Israel- from masortim, chilonim, Dati Leumi, and Chareidi, and many of the attendees at the Kotel last Rosh Chodesh, coming out to answer the call of Women For the Wall were Dati Leumi women, not just Chareidim, as the media tried to portray it.

The big Rabbis in the Dati Leumi world, your rabbis, I presume, have come out supporting the efforts of Women For the Wall, supporting keeping the Kotel a place respectful of both Halacha and Mesora, and not to allow Women of the Wall to make the changes they desire. 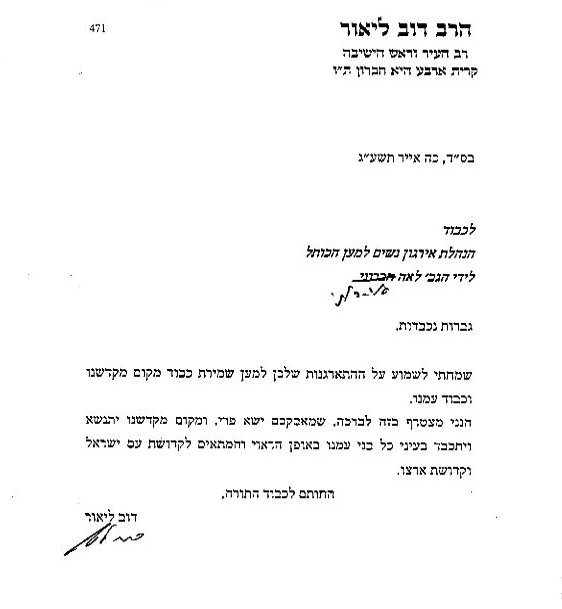 The general Israeli Dati Leumi public is very much opposed to what the Women of the Wall are trying to do, and are firmly in the camp that the Kotel needs to stay a place where mesora (tradition) is followed.

Even if you ignored all the Chareidim who oppose change at the Kotel, and oppose what the Women of the Wall are trying to do, as head of the Dati Leumi party, the party that people voted for because they thought you had the interest of the Dati Leumi people in mind, keep the feelings of your constituents/voters in mind.

You’re a man of faith, a man of integrity, a man of ethics, and that is why you should put your foot down and not let a small group of Americans who don’t represent Israeli society, steamroll you into doing something that you’re opposed to.

But all that aside, do you think any Dati Leumi people will vote for you next election if you show that you don’t have their religious interests in mind?

We call on you to meet with the Women For the Wall, to hear our side, and to work with us on this issue, and not only with the minuscule group trying to make radical changes at the Kotel, the Women of the Wall.

Women For the Wall

About the Author
Adara Peskin is a non conformist chareidi feminist single mother of 4 living in Kochav Yaakov, activist for mental health awareness, blogger at PennilessParenting.com about living a life with mindful spending, and foraging instructor, attempting to make a kiddush Hashem every day via her interactions with others.
Comments