Each element of Creation receives Divine approval: “And God saw that it was good.” That changes after the arrival of Adam, as God said, “It is not good for man to be alone.” To relieve Adam’s loneliness, God created Eve so they could both enjoy the pleasures of the Garden of Eden, be fruitful, multiply and fill the earth.

The lifelong human need for bonding with a mate receives Divine endorsement and blessing in Genesis 2:24: “Therefore, a man shall leave father and mother, cleave unto a wife, and they shall be one flesh.”

As a participant in a marriage and relationship skills training class asked, “Isn’t it true that when we marry, two become one?”

“Yes,” the instructor responded, “but which one?”

Many religious scholars see marriage as a reuniting of two parts that were once one. The revered 18th century Rabbi Yisroel ben Eliezer, known as the Baal Shem Tov, taught that separated souls long to be rejoined, an act completed through the sacred union of marriage.

Judaism regards marriage so highly that it compares God’s relationship to Israel as one of a groom to a bride. “As a bridegroom rejoices over you,” declares Isaiah (62:5). Each Sabbath is viewed as a bride and welcomed with the words: “Come, My Beloved.”

These biblical verses form the foundation of a Judeo-Christian view of marriage reaching back to time immemorial: a relationship that makes for personal fulfillment and perpetuation of the family.

It was custom in ancient Judea that when a boy was born, a cedar was planted in his honor; when a girl was born, a cypress.  When the children were old enough to understand, they were told about their trees, expected to tend to them to help their trees reach their potential. 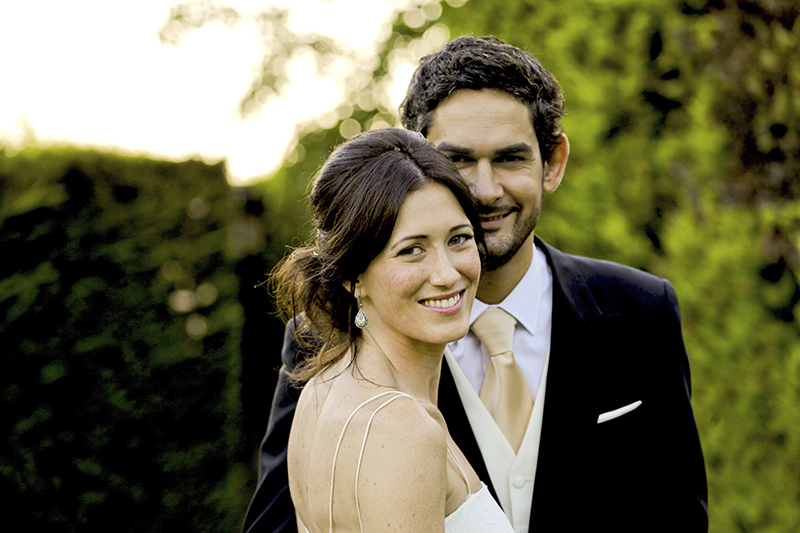 Bride and groom at their wedding.

The trees grew along with the children. When the years went by and the children grew into adults who were ready for marriage, branches were woven from the sturdy cedar and graceful cypress to make a canopy under which a bride and groom committed to forever join their lives.

In the Book of Psalms, the rising sun is compared to a bridegroom coming forth from his canopy. The physical radiance of the sun is a metaphor for the spiritual radiance that bathes the bridegroom, as it does the bride, in the moment of supreme fulfillment of their love in the sacred bond of marriage.

To come under the huppah is to be sheltered by divine light, the same light that enters into the world with the advent of Sabbath.

The use of tree branches to fashion the huppah suggests marriage is a living, growing relationship. Husband and wife can help each other grow even as their love can deepen as they face life’s challenges together, as they share its joys and sorrows, laughter and tears, delights and disappointments.

Throughout the world, the homes we create shape the fabric and resilience of our neighborhoods and communities.

Although in many languages, the words house and home may be used interchangeably, they are not the same.

Houses are built with bricks and mortar; homes require commitment, caring, communication, emotional and physical connection, faith, mutual respect, consideration, openness to change, and a willingness to sacrifice when necessary on behalf of that commitment.

To Adam and Eve, Paradise was Home. For couples, Home remains the Paradise we create with our hearts.

Adapted from PrePAIRS for Jewish Marriage: a PAIRS Foundation curriculum for strengthening relationships.