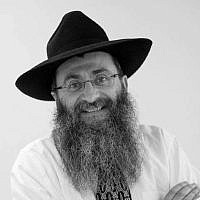 Forty years ago, at the farbrengen for Chof Av 5741 (1981), the Lubavitcher Rebbe uncovered for us the deeper meaning of a peacemaking doctrine.

It is the powerful explanation only a true leader could come up, and it is truly life-changing when internalized. It especially resonant in these present times of such unprecedented polarization, from which there seems to be no escape.

To the Rebbe hatred was not a natural state, but a temporary malfunction that doesn’t represent what a person feels deep down. Ultimately, we have a soul, and it wants nothing more than to “love your fellow as yourself,” the most important mitzvah in the Torah.

So why do people hate? Because they are hurt. It’s a self-defense mechanism. When we see someone express hatred toward another person, don’t see a person full of spite and evil, but a person who feels wounded, a person desperate to be respected, validated, and told that they matter. For the person who believes someone else is out to undermine him and harm him, when he feels stepped on, hatred and animosity are the tools by which he seeks to regain his own sense of balance.

So, if we could but find a way restore the respect between two people, if he could just convince them that they still value one another, the underlying relationship could be restored, and the love between them could grow back and flourish once more.

Indeed, the solution to conflict is sometimes simpler than it seems: Just go back and look at each other. Simply pay attention to the person in front of you, the person you used to know and respect. Animosity doesn’t stand on its own two feet; it is the result of feeling disrespected, unheard, unvalidated, and invisible. If you could solve that, the animosity would disappear.

Example: If two people chose to live with each other and build a home and family together, and for years experienced the deepest relationship possible, there must certainly be some common ground there, and given the opportunity, they would surely find a way to find it. The problem is just the anger, resentment and frustration that has built up over time.

Judaism believes that very few people go and hurt others just because they want to, and deep down, the wounded as well as the one who wounds, ultimately have a Divine soul that wants to do the right thing. There are ways of dealing with these issues and arriving at peace and coexistence; stewing in animosity and resentment is not one of them

A husband and wife were at a breaking point in their relationship. They simply couldn’t get along and kept getting on each other’s nerves. Finally, the husband had enough, and decided to visit a Kabbalist known for his supernatural abilities. “Either she goes or I go,” he said, and asked the Kabbalist to curse his wife with death, G-d forbid. Closing his eyes intently, the Kabbalist asked for the Hebrew name of the wife and of her mother. The mystic sat deep in thought, meditating, chanting, shaking. Finally, he said, “I can do it, but first you must do this one thing. I’m giving her one more month, and you have to make sure it’s a pleasant one.”

The husband agreed, reckoning it was worth suffering for one more month so he could finally be free for life. The next day, he asked his boss for permission to leave work an hour early, so he could surprise his wife by tidying up and doing the dishes. On the second day, for the first time in his life, he took out a rag and scrubbed the windowsills clean. On the third day he prepared a lunch for her like he’d never done before. On the fourth day, he played music from her favorite band when she walked through the door.

First his wife thought he’d gone mad. Then, she thought he must be drunk, or looking for attention. But eventually, she began to enjoy the new routine. After a week, she began to surprise her husband with some nice gestures of her own. After 29 days of this belated honeymoon, the Kabbalist called the husband, reminding him that the curse would take effect the next day. “Wait,” the husband shouted, “maybe let’s wait a year or two?

There is peace that lives within all of us. It can be unleashed, rebuilding all that has been shattered.

About the Author
Born in London England. Studied at Lubavitch’s Yeshivas in Paris and New York. Chabad Shliach on Long Island.
Comments
Advertisement