This letter appeared in the Daily Telegraph (London) on 16 June 2020.  It is in response to an earlier letter under the heading “Opposing the Israeli government’s land grab” 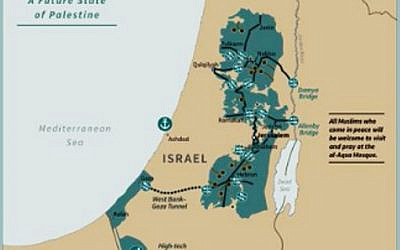 The letter from Crispin Blunt and others (June 13) does not mention “Peace to Prosperity: a vision to improve the lives of the Palestinian and Israeli people” – the plan devised by the Trump administration.  It is within the terms of that plan that any extension of Israel’s sovereignty to parts of the West Bank is contemplated.

The British Government welcomed the American  plan as “a positive step forward”.  Dominic Raab, the Foreign Secretary, described it as “a serious proposal”.  Both Benjamin Netanyahu and Benny Gantz (Israel’s alternating prime ministers) were present when the plan was unveiled at the White House, and both accepted it.

The target of the plan is to achieve a contiguous, viable sovereign Palestine comprising  70 per cent of the West Bank together with a Gaza expanded by three substantial land swaps.

With the deal comes a huge financial boost to the Palestinian Authority, and an economic aid package akin to the Marshall Plan.

The Palestinian leadership has rejected the plan. Egypt, Saudi Arabia, Qatar and the UAE all gave it a reasonable reception, some urging the Palestinians to start negotiating on its basis.

About the Author
Born in London and educated at Oxford University, Neville Teller has worked in advertising, management, the media and the Civil Service, and has written about the Middle East for more than 30 years. He has also written consistently for BBC radio, and in the Queen's Birthday Honours in 2006 was awarded an MBE "for services to broadcasting and to drama.” He made aliyah in 2011.
Comments