Ever since the end of the second Israel-Lebanon war in 2006, there have been increasing signs that a third Israel-Lebanon war is coming. The Independent predicts that it will be “devastating”. Like all previous Arab wars against Israel, its main motivation is antisemitism, but unlike most of those wars, there is not even the shadow of a non-antisemitic motive. There is no economic or geopolitical benefit for Lebanon to gain. This war will result in many more Israeli and Arab deaths, a huge amount of devastation, all on the altar of antisemitism for no benefit whatsoever.

No justification other than hatred

Hezbullah has no credible justification for its continued military build-up against Israel. The tiny “Shabaa Farms,” on the border with Israel, is usually cited as a justification, but as I demonstrated in Gatestone, it is no more than an excuse.

Another cited justification is revenge for the two previous Israel-Lebanon wars, but that is pure hypocrisy. Neither war would have occurred if Lebanon had not been used as a base for terrorists – first the PLO then Hezbullah – to attack Israel. Lebanon should blame itself for those wars before it attributes any blame to Israel.

The Lebanese terrorists also sometimes opportunistically extol the Palestinian cause, but one would be naïve to think that the Lebanese are motivated by brotherhood with the Palestinian people. Even Al Jazeera, hardly a friend of Israel, admits how badly Palestinians are treated in Lebanon, “Palestinians still live in the 12 UN-registered camps and 42 other so-called gatherings across Lebanon. Lebanon is their home but any chance of becoming a genuine part of the communities they live in is constantly undermined by strict laws “protecting” Lebanese citizens’ rights, general safety and wellbeing.” The Lebanese would not even share their better jobs with the Palestinians, let alone give up their lives.

But Hezbullah’s antisemitic motivations are nowhere clearer than in their own words. As reported in the Jerusalem Post, “movement deputy leader Naim Qassem said that ‘the history of Jews has proven that, regardless of the Zionist proposal, they are a people who are evil in their ideas.’ Nasrallah, meanwhile, has said that ‘God imprinted blasphemy on the Jews’ hearts”.

Whipping up the hatred

Every Arab war against Israel is preceded by a whipping up of hatred one notch above the usual antisemitic hatred promoted in the Arab world. While the Lebanese terrorists’ phenomenal arsenal pointed at Israel is indication enough, the whipping up of hatred may be an even stronger indication that Hezbullah is itching for another war with Israel and is preparing its people for the sacrifices required to fight the hated Yahudi (Jews).

As reported in the Jerusalem Post, Lebanese terrorists have planted “an array of enemy symbols” near the border with Israel, including a poster of Ayatollah Khomeini with the words “We are coming” in Hebrew and Arabic. 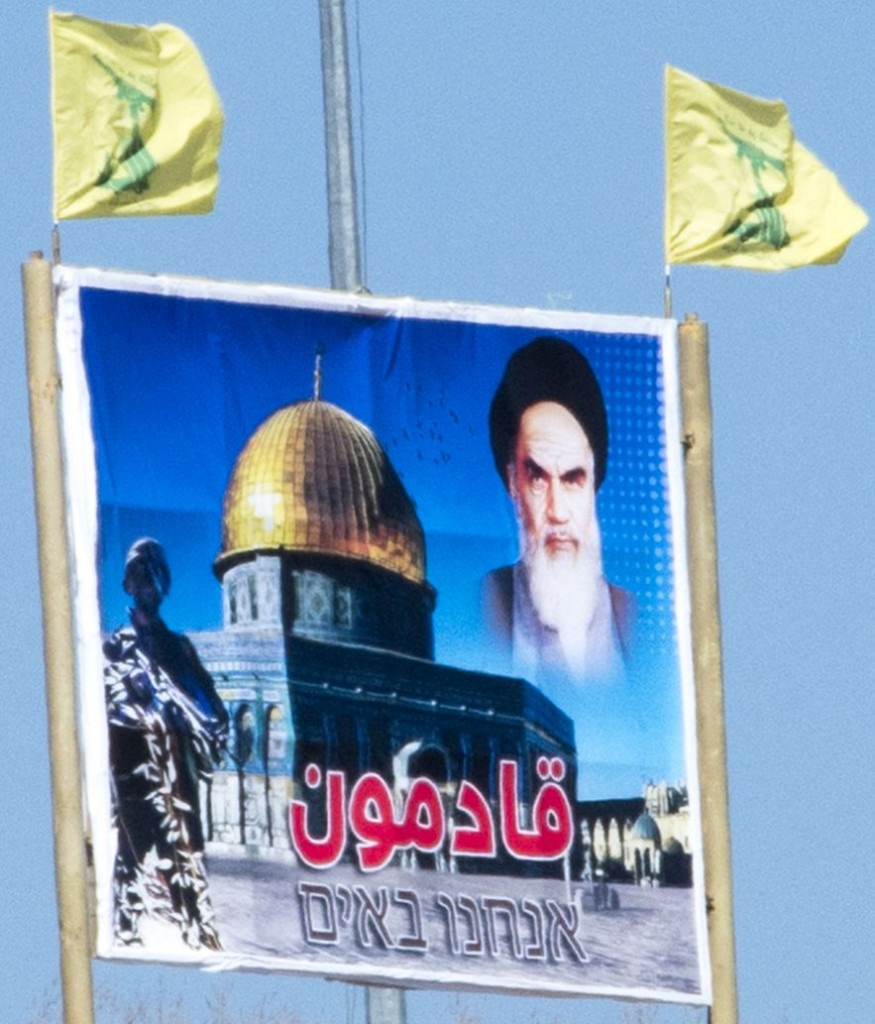 Poster on the Lebanese side if the Lebanon-Israel border. Photo credit: Jennie Workman Milne.

The most hateful and sickening display may be a billboard celebrating the killing of Israelis. “In Metulla [Israel] there is a memorial for the 12 Israeli soldiers killed in the March 10, 1985, suicide bombing, while just across the border a huge billboard celebrates the massacre.”

As a Lebanese person, I am mortified by the appalling hatred emanating from my native country, but I also recognize that we as Lebanese people cannot escape responsibility. Wherever each one of us might live, it is every Lebanese person’s duty to speak up.

Those who are responsible

Hezbullah of course is the antagonist aiming for war, and as such it holds the main responsibility. A number of countries and groups of countries other than Israel consider Hezbullah or at least its military wing to be a terrorist organization: the Arab League, Australia, Bahrain, Canada, the European Union, France, the Gulf Cooperation Council, Netherlands, New Zealand, the United Kingdom, and the USA. But none of these countries or organizations is attempting to stop the Lebanese terrorists from attacking Israel. The United Kingdom even allowed those terrorists to march in the UK’s own capital and to call for the annihilation of Israel.

One party that cannot escape responsibility is the Lebanese government, and by extension the Lebanese people. It is responsible for what happens on its own territory, consequently any attacks originating from Lebanon, even if not engineered by Lebanon’s own army is the responsibility of the Lebanese government. Lebanese politicians also often help in whipping up hatred against Israel and lending moral support to the terrorists. Soon after his election as President, Michel Aoun defended Hezbullah’s terrorism by saying, “As long as the Lebanese army is not strong enough to battle Israel … we feel the need for its [Hezbullah’s] existence”.

The overriding responsibility, however, rests with the terrorist regime of Iran which finances the Lebanese terrorists and supplies them with weapons. Although Hezbullah is very much a Lebanese organization that is motivated by its own hatred of Israel, it is also a proxy of Iran, and it would be far less dangerous without Iran, despite Hezbullah’s strong support among the Lebanese population. Iran, however, has a free hand in supporting Hezbullah. Iran is even considered somewhat respectable after it signed a nuclear deal with the US, the UK, France, China, Russia, and Germany.

Since the nuclear deal with Iran did not require that Iran stop supporting terrorism, all six nations that signed the deal also hold part of the responsibility for the impending war. Barack Obama, David Cameron, Francois Hollande, Xi Jinping, Vladimir Putin, Angela Merkel, and their governments did not try to stop the terrorist regime’s single-minded determination to attack the Jewish state, but chose the economic benefits of trade with Iran instead.

So-called peace groups indicate by their names a distaste for war; however, they are busy denouncing Israel, the country that would be at the receiving end of the war. Denouncing Hezbullah, the side that is itching for war, seems to be the furthest thing from their minds. Among those so-called peace groups are Act Now to Stop War and End Racism (ANSWER), CODEPINK: Women for Peace, and Jewish Voice for Peace (JVP), which are listed by the Anti-Defamation League among the top ten anti-Israel organizations in the United States.

The United Nations Security Council stated in resolution 1701 that, “The clear path forward was by disarming and disbanding Hizbollah and other militias, as well as by Lebanon’s exercise of authority over all its territory”, but neither the United Nations nor its Security Council has done anything to enforce that direction. On the contrary. Since 2006, the UN General Assembly adopted numerous resolutions against the Jewish state (20 in 2016 alone), but not a single one against the Lebanese terrorists.

Jews chased from their homes, yet again

Here we have a situation of impending war that is purely based on antisemitic hatred and totally preventable by those who can influence or curtail Hezbullah, yet there is no significant effort to prevent it. Not by Russia, not by the Lebanese government, not by the United Nations, and not even by those who recognize that Hezbullah is a terrorist organization. All that Israel can do is to prepare for it, and for the first time, Israel is considering evacuating civilians when the war breaks.

Despite Israel’s military might, Jews will be killed, some will be displaced, and many will be terrorized. The world media will show gruesome pictures of dead Arabs and question the right of the Jewish state to defend itself. The Jewish state will be demonized by self-appointed “peace” activists who will blame it for the deaths of Arabs that Israel will have done everything to avoid, short of committing suicide. The jailing of the Jewish state’s leaders will be demanded by thugs marching in the streets of Europe and America. From their comfortable sofas, politicians will pontificate about proportionality before cutting Israel’s self-defense at the knees through the UN Security Council.

In 1943, the allies did not bomb railway routes taking Jews to death camps. In 2015, the Pope denounced that lack of action, over seven decades too late. In 2017, there is an opportunity to do better, but in fact not much has changed. When Jews are about to be attacked for no reason other than they are Jews, the world again looks the other way.

Added on July 2: Please sign the petition asking President Donald Trump and others to apply pressure on Russia to disarm Hezbullah. 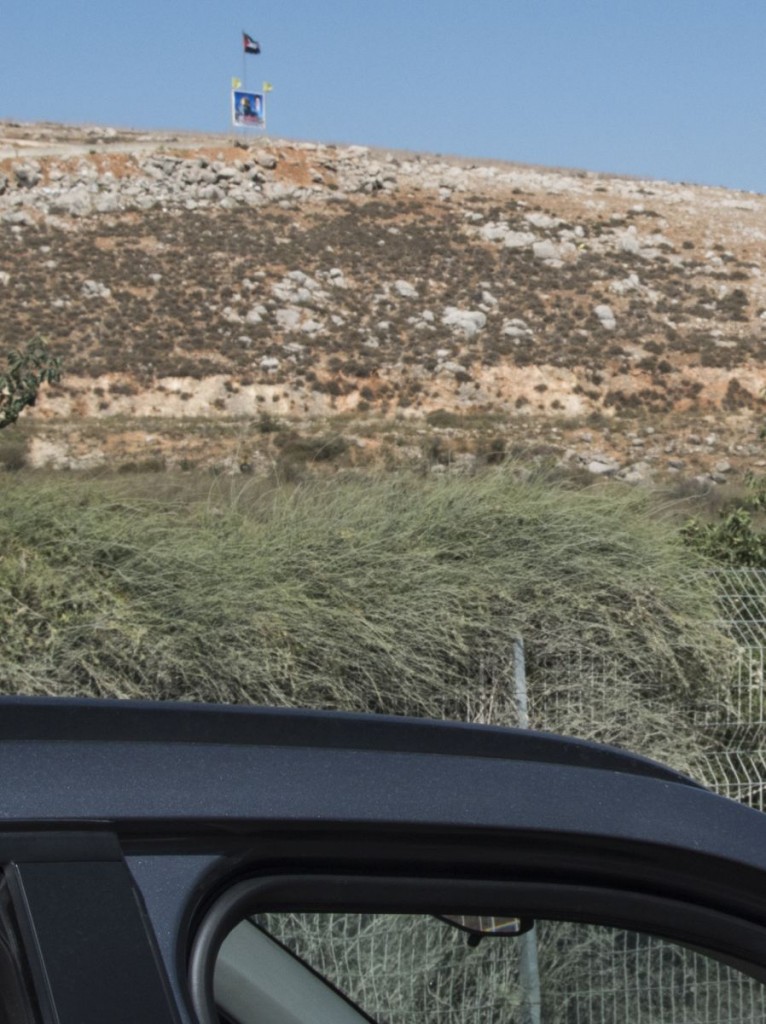 Same poster from farther away; note the Palestinian flag on the top. Photo credit: Jennie Workman Milne.
About the Author
Fred Maroun is a Canadian of Arab origin who lived in Lebanon until 1984, including during 10 years of civil war. Fred supports Israel's right to exist as a Jewish state, and he supports the Palestinians' right to self-determination in their own state. Fred supports a liberal and democratic Middle East where all religions and nationalities, including Palestinians, can co-exist in peace with each other and with Israel, and where human rights are respected. Fred is an atheist, a social liberal, and an advocate of equal rights for LGBT people everywhere.
Related Topics
Related Posts
Comments