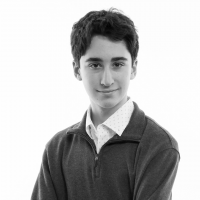 The Blogs
Thomas Ullman
Apply for a Blog
Please note that the posts on The Blogs are contributed by third parties. The opinions, facts and any media content in them are presented solely by the authors, and neither The Times of Israel nor its partners assume any responsibility for them. Please contact us in case of abuse. In case of abuse,
Report this post.

“Death to America!” “Death to Israel!” Picture yourself hearing these phrases barked by a marching mob. Where do you see yourself? Dictatorial Iran? War-torn Syria? Try New York. At the beginning of the month, anti-Israel rallies dubbed the “Day of Rage” took place across the country. Protestors decried the United States and the Jewish state, labeling the latter as an “imperialist satellite” of the former. The usual anti-Israel vitriol was heard at these marches: calls for Palestinians to return to “stolen land”, protestors denouncing a two-state solution, and activists proclaiming their wish to have “all of it” — the Land of Israel, that is. But there was something fundamentally different about how these rallies were marketed. Despite the marches being primarily focused on chastising Israel, they were presented as Black Lives Matter protests. Why would the focus of a rally against police brutality and racial justice in America be on Israel? The answer is quite simple: it is the perfect opportunity for anti-Israel activists to unjustly capitalize on the anguish of people of color in the United States for the activists’ own political objectives.

Since the murder of George Floyd in May, numerous movements and activists claiming to stand with the black community have begun shifting the attention of the Black Lives Matter movement from racial discrimination in America to a completely unrelated issue: Israel. Groups like Boycott, Divest, Sanction (BDS) have spewed invective rhetoric regarding Israel on behalf of the BLM movement, despite the issue of police brutality and the Israel-Palestine conflict being worlds away. On the BDS website, a statement iterated the group’s position with regards to Black Lives Matter: ”[BLM’s] refusal to stay silent in the face of massive and systemic state violence targeting black bodies and your resistance against repression and disenfranchisement in black communities are a source of inspiration to our own struggle against Israel’s regime of occupation, settler-colonialism and apartheid.”

The colorful adjectives used at the end of this quote struck me. This wasn’t the first time I had heard them; after all, I am an American student on a high school campus — there aren’t many who are willing to challenge the traditional anti-Israel narrative. But these accusations are completely false and slanderous. First off, the “occupation” of Palestine (which BDS sees as encompassing both the Palestinian Territories and the State of Israel) is not an occupation at all, but a United Nations-recognized campaign for self-determination for the Jewish people. One cannot occupy that which is theirs. Next, let’s address the term “settler-colonialism”. The irony of accusing Israel of this is enough to make one laugh: Judea, the historic Jewish homeland, was colonized and settled many times in history, displacing its Jewish majority in the process. One of these settler-colonial states was the Ottoman Empire, which brought an influx of Arab residents into what is now Israel. In the Twentieth Century, these residents began to create a national identity of their own. They called themselves “Palestinians”, after the term that the Romans used to refer to Judea in order to eradicate the history of the Jewish presence there. Finally, the most forceful of these accusations is the term “apartheid”. South African apartheid left black people in festering poverty, subjected them to brutalities, and left many dead. Hearkening back to apartheid rightfully compels people of color to side with those who claim to resist it. The problem is that no such system has ever been implemented in Israel. Arabs are completely equal to Jews, with many serving in the Knesset, in universities, and in other high-level positions. There is no state-sponsored program to disenfranchise minority groups or to keep them in poverty. Israel is an egalitarian nation. By painting Israel as a racist one and by presenting Israel’s critics as warriors against prejudice, anti-Israel groups can effectively coax people of color into supporting them, all while asserting that any pushback against their claims is “defending”, “enabling” or “justifying” racism.

Moreover, every single one of BDS’ accusations is steeped in hypocrisy. In response to the recent Day of Rage protests as well as related violence against Jewish institutions, National Council of Young Israel President Farley Weiss wisely noted that “By poisoning protests with anti-Israel declarations and antisemitic remarks, some of the individuals who so desperately seek justice and an end to racism are themselves engaging in abhorrent and hypocritical behavior that fans the flames of bigotry and hate.” The activists who claim to be fighting for black people by opposing “Israeli apartheid” are, at the same time, conveniently ignoring the systemic racism that black people have to face every day in the Palestinian Territories. A Palestinian Authority state propaganda outlet, Al Quds, has repeatedly made disparaging and racist remarks against black people. In 2006, Al Quds regurgitated bigoted comments about former US Secretary of State Condoleezza Rice, who is an African American. The New York Times reported that Al Quds “depicted Ms. Rice as pregnant with an armed monkey, and [had] a caption that read, ‘Rice speaks about the birth of a new Middle East.’” But that’s not all — PA-owned media has used terms such as “black spinster” when referring to the Secretary as well. Keep in mind that these statements were not made by a fringe media outlet, but by a state-owned newspaper of Palestine. In other words, the Palestinian Authority has been endorsing and feeding its people racist propaganda. Talk about apartheid.

Besides racist state media, black people in the Palestinian Territories endure a variety of racist acts against them. 11,000 black Palestinians live in a community known as “Al-Abeed” in Gaza, which is Arabic for “slaves”. One particular black Palestinian resident of Al-Abeed named Mohammed Obaid had his story told in a Gulf News article: “Among friends and co-workers, Obaid is known as Samara — which means dark skinned…  Obaid says that subtle racism makes his life more difficult than lighter skinned Palestinians.” He pointed to his career in dancing as an example of the discrimination that he has undergone under PA-controlled Gaza, saying that he had to often prove himself “twice as much as others”. In jobs that demand communication with customers, black Palestinians’ applications are often disregarded. Obaid stated that Palestinian “security forces have recently been very harsh on black Palestinians”, and that he was recently the only one of his friends removed from a car that was pulled over due to his skin color. He even admitted that he thought about leaving Gaza despite his family residing there for many decades. In Israel, on the other hand, black Israelis are found as judges, ambassadors, and members of the Knesset. In fact, for decades, Israel has encouraged and even paid for Ethiopian Jews fleeing from persecution to start new lives as equals in Israel. There is no doubt that the anti-Israel crowd is actively trying to distract the BLM movement from the racism that the Palestinian nation perpetuates, while claiming that Israel, a safe haven for black people in the Levant, partakes in “racism” and “apartheid”.

In the end, all this boils down to the fact that the anti-Israel movement needs some publicity. By latching on and attempting to relate to a legitimate civil rights movement, anti-Israel activists are able to efficiently spread a message — even if it is not founded in truth. The weaponization of black pain to further a political goal should be universally condemned — the exploitation of a righteous movement should not be seen as “freeing Palestine”, but as a pitiful act of political sabotage. In the end, it is up to the BLM movement to decide: will it stand up to injustices against black people globally, including ones bolstered by the Palestinian Authority, or will it selectively ignore the anti-black sentiment that the Palestinian Authority and Palestinian media perpetuate? Only time will tell.

About the Author
Thomas Ullman is a high school student attending Marin Academy in San Rafael, California. His articles have appeared in publications such as the Foundation for Economic Education and The American Spectator.
Related Topics
Related Posts
Comments