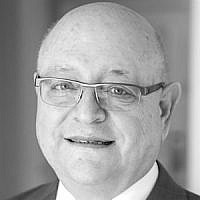 The Blogs
Mark G. Yudof
Apply for a Blog
Please note that the posts on The Blogs are contributed by third parties. The opinions, facts and any media content in them are presented solely by the authors, and neither The Times of Israel nor its partners assume any responsibility for them. Please contact us in case of abuse. In case of abuse,
Report this post.

Governments not only do things like provide police protection and build infrastructure, they also speak and provide moral leadership. The Board of Regents of the University of California recently had such a teaching moment.

In reaction to numerous episodes of anti-Semitic graffiti, narratives around the boycott, divestment, and sanctions movement against Israel invoking ancient libels (Jews as too powerful and privileged), calls for an Intifada in America, and efforts to silence any campus speaker perceived as pro-Israel, the board unanimously adopted a simple resolution: “Anti-Semitism, anti-Semitic forms of anti-Zionism, and other forms of discrimination have no place at the University of California.”

The policy is largely aspirational and hortatory; there are no enforcement mechanisms and disciplinary code provisions in the resolution. This is as it should be. Even hate speech is generally protected under the First Amendment. There is no cause of action for group libel against African-Americans, Jews, Latinos, gays, and other groups in America.

As the authors note, “First Amendment principles and academic freedom principles must be paramount in guiding the University’s response to instances of bias, prejudice, and intolerance.” The University should respond “with more speech — to educate members of our community.”

This is classic government expression, not different in kind from a governor opining on environmental issues or President Obama condemning murders in a Black church in South Carolina. Or a university chancellor embracing affirmative action or the Dream Act for undocumented immigrants. There are few constitutional limits on government speech, though state laws and propriety may intervene. If a city builds a monument to Iraqi veterans, there is no requirement that it similarly honor those opposed to the war. Government can lawfully take sides.

Yet in some circles the UC resolution on intolerance has been greeted with near hysteria and specious constitutional arguments invoked. My favorite weird principle, never accepted by any court, is that criticism of a speaker should be viewed as an effort to silence the speaker. The first-to-speak idea privileges the first speaker over everyone else. Hence if UC regents criticize anti-Semitic speech, they are guilty of intimidating and attempting to silence the anti-Semites. By parallel reasoning, if Ku Klux Klan leader David Duke delivered a racist speech on a campus, a college president who attacked his speech would have violated Duke’s free speech rights. So much for the marketplace of ideas.

When I was president of the University of California, I was asked at a private gathering about a UCLA faculty discussion on the Middle East. I observed that the panel was biased against Israel, but there were other voices at UCLA with a different perspective. I took no action of any kind. I received a letter from over 100 professors accusing me of violating their academic freedom. Apparently disagreement with this crowd is not only wrong but unconstitutional.

The second junk theory is that demonstrators have a right to shut down a speaker with whom they disagree. Ironically, this is a privileging of the last to speak (and act) over the person who is at the dais. But it goes beyond a heckler’s veto; it is not just demonstrating or booing; it involves physically preventing a pro-Israel speaker from being heard. When police at the University of Minnesota Law School arrested demonstrators who would not allow philosopher Moshe Habertal to speak, they opined to the media that their speech rights had been violated. So the logic is that preventing speech is itself protected speech.

The University of California did not accept any of these specious legal arguments. It acted forthrightly to condemn intolerance. And in doing so it set an example for the entire nation.