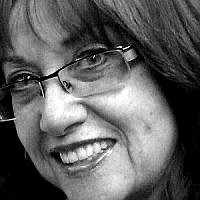 We have been accused of bringing pestilence and plagues, of controlling the banks, the economy, the weather, and the world. We are responsible for communism, for fascism, for capitalism. We are a versatile people; a paradox. We have been labeled sorcerers, termites, vermin, and at the same time hypnotists.

Some call antisemitism a disease. But a disease implies treatment and a possible cure. Antisemitism is a mindset. It is something the antisemite chooses to believe. It is part of his psyche. You don’t develop hatred involuntarily, like you do a disease. You choose to hate. You choose what or whom to hate. And more often than not we Jews are chosen. After all, we are the chosen people are we not?

My mother once confessed to me that as a little girl, who grew up in Poland, and witnessed the holocaust first hand, in Poland and in Siberia, she often wondered if there was something wrong with us, that we were hated so. She wondered what we did wrong to make people hate us. Victims of abuse often wonder what they did wrong to make their abusers abuse them. We have suffered through abuse throughout the history of our people. Many seem unconsciously to have adopted the mindset of the victim trying to please the abuser.

Many Jewish Leftists still continue to support antisemitic Democrat leaders and activists such as Linda Sarsour, who seems to have no trouble praising the proud antisemitic Nation of Islam Leader, Louis Farrakhan, but who has said, regarding Israel, “If you’re on the side of the oppressor, or you’re defending the oppressor, or you’re actually trying to humanize the oppressor, then that’s a problem…” In other words, don’t humanize the Israeli oppressors, i.e. the Jews. The two newly elected Democrat Muslim Congresswomen, Rashida Tlaib from Michigan, and Ilhad Omar from Minnesota, as well as Linda Sarsour, all support BDS, and have falsely accused Israel of apartheid, of being evil, and of committing massacres against the Palestinians. Yet their anti Israel stance is excused and overlooked.

Jewish Democrats who continue to support politicians and activists who praise Farrakhan, and call him a “great man,” seem to have distanced themselves from Judaism, replacing it with Leftism. They mistakenly think that pleasing antisemites will show that they are no longer Jewish victims, but rather, politically correct seekers of “social justice.”

We must never abandon our beliefs, our heritage, and our people. We must stand steadfast, speaking out against antisemitism wherever it exists. We must not call out White Supremacist antisemites while willfully ignoring or excusing the antisemites on the Left who have large followings and who have infiltrated our universities and even our government.

At the same time, it is incumbent upon us as Jews, to stand unapologetic and steadfast in celebration and in recognition of the miracle of our own existence. In spite of the best efforts of antisemites through the ages, we have miraculously survived and thrived as a people and as the nation of Israel. Our survival itself is a miracle that cannot be denied. Antisemitism should never be excused and our lives and our people should never be taken for granted.