Jewish blood of NO real consequences poured, again; Hitlerism in Jerusalem, Jews are murdered by the numbers under Jewish sovereignty; that must end or we must admit that the Arabs are a step ahead of ending Israel. Jewish blood poured on the bible, the Talit, on the floor of synagogue, could not be more gruesome and consequential.

Mass protests against perceived and made up Israeli crimes have been going on in the land for months. Each is given a specific label, but they are all part of what I would call Intifada. The epic of this intifada is the Al-Aqsa mosque, built on the very spot where two Jewish Temples once stood. The Arabs rationalize their rejection of religious coexistence by denying a Jewish connection to the site and agreeing to Jews praying there. 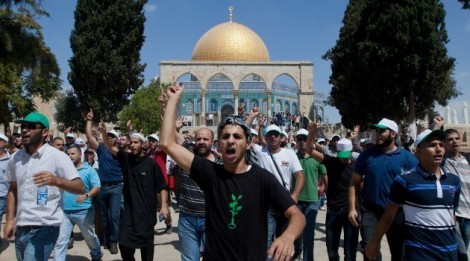 Dore Gold, a former Israeli ambassador to the U.N. coined the term “Temple Denial” and went to say that the attempt to delegitimize Israel, by rejecting Jewish claims to the Holiest of Holy site to the Jews and their Holy City Jerusalem started by the Palestinian Liberation Organization (PLO) chief Yasser Arafat at the end of the Camp David summit in 2000. It has been relentlessly promoted since then by Arafat’s successors in the Palestinian Authority (PA) and by radical Moslems elsewhere. And it is this, too, that is enabling Islamic State (ISIS) to now gain a foothold in Jerusalem.

Mr. Gold, in his book: ”The Fight for Jerusalem: Radical Islam, the West, and the Future of the Holy City,” has shown how the Palestinian Authority President, Mahmoud Abbas, has picked up from where Arafat left off, continuing the campaign to cast aspersions on Israel’s connection to Jerusalem, in general, and to the Temple Mount in particular. Indeed, Abbas and other PA figures have taken many opportunities to assert that if there was a Jewish Temple 2,000 years ago, it was located in Nablus and not Jerusalem. To deny there were Jewish temples on Temple Mount in Jerusalem, the Arabs removed tons of soil full of evidence and ancient artifacts from the Mount.

Temple Mount denial is a dangerous religious and political propaganda tool with a contagious message, but for years some pundits shrugged it off. After all, they claimed, in Judaism there is not only a religious connection on the part of the Jews to the Holiest site, but there is also abundant archaeological evidence on and around the site to prove it.

Disregarding documented Jewish history, the Arab-Palestinian new version of Jerusalem’s history contradicts their own original Islamic tradition. Abu Ja’far Muhammad bin Jarir al-Tabari, a leading commentator on the Quran of his time, known as one of Islam’s greatest historians, describes the conquest of Jerusalem by the second caliph, Umar bin al-Khattab, as heading toward ‘the area where the Romans buried the Temple [bayt al-maqdis] at the time of the sons of Israel’.

Now ISIS is recruiting men into its ranks based on a holy campaign its goal to prepare suicide and jihadi attacks against the Jews, in order to implement the law of Allah and liberate the captive Al-Aqsa mosque from the hands of the filthy Jews.

The United States and Europe have wasted precious energy and resources on myopic “solutions” to what has become an almost uncontainable global phenomenon, Islam war on civilization. Blaming Israel for any of it not only reeks of anti-Semitism, it is also utterly counter-productive and will accomplish more vicious attacks.

Temple Mount is not the cause of the war Islam has with the West, nor are Jews who insist on the right to pray there; it is neither “provocative” nor “controversial.”

Recognizing reality, rather than burying heads in deep sands of political correctness and excuses is now a requisite. If not, it will not be long before decapitation videos will begin going viral from Jerusalem.