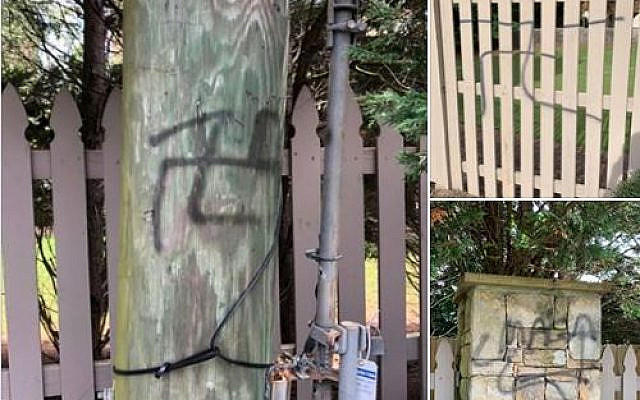 Whether on banners unfurled over a Los Angeles freeway or graffiti painted in a neighborhood not far from my suburban Atlanta home, the message to Jews was made clear this week.

And while I know a vocal minority does not represent the majority, I have to wonder if this thousands-of-years old recurring message of “You are not welcome here” will ever go away.

I learned about the one that was geographically closer to home via a Facebook post from someone I know. A subdivision had had six swastikas painted on fences, a stone pillar, a utilities pole. The one on the stone column was accompanied by MAGA. Make America Great Again. How does one do that? By getting rid of Jews. That is the message of these paired symbols, loud and clear.

The neighborhood came together to clean it up and local rabbis and the ADL condemned the act. As of this writing, The Atlanta Journal Constitution has not covered this story and WSB-TV’s online story ironically says in one sentence that it wasn’t clear why this location was chosen and in the next, notes the response from a rabbi at a nearby synagogue. Yes, East Cobb has a Jewish population.

But haters don’t only have to target neighborhoods. Some have larger audiences in mind. 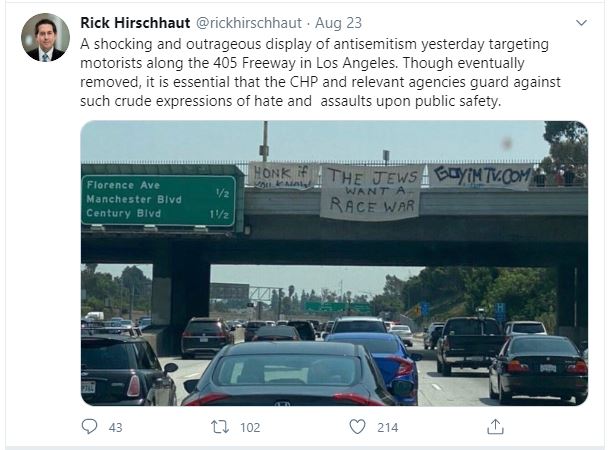 Local drivers on the 405 Freeway in Los Angeles were greeted by these words this weekend, “Honk if you know The Jews want a race war.” People on social media picked it up, the ADL worked with the police to take them down, and the Jewish press covered it. I’ve not yet seen anything in main stream media. The signage also directed beople to go to goyimtv.com. I did, to see what it was all about. The site has different channels for different kinds of content that people can upload, incuding everything from “Holohoax” to “Pharmajewdical industry.” There are revenue sharing opportunities for people to make money via partner and affiliate programs. It is, in short, commercialized hate. It’s “About” page proudly proclaims, “All members of the community and wider society should be treated as equals with the same rights, regardless of their race, age, sex, religion, political beliefs, or any other immutable attribute or self assigned designation UNLESS YOU’RE A JEW or THE SHABBOS EQUIVALENT.”

Last year I wrote a blog about social media accounts trying to stir up hatred. In it, I acknowledged the difficulty in trying to get hate-filled accounts pulled from third party platforms, and suggested that a better approach might be to put pressure on internet service providers, domain registrars, webhosting companies to create standards and enforce terms of agreement.

This is where organizations like the Coalition for a Safer Web and the Network Contagion Research Institute come into play. The long history of antisemitism and other forms of hate tells us hate will not go away. Technology ought to be harnessed into tracking it and exposing the hatemongers for all to see. Whether it be painted on a fence, hanging from a bridge or generating income online, hate hurts and should not be given a platform. 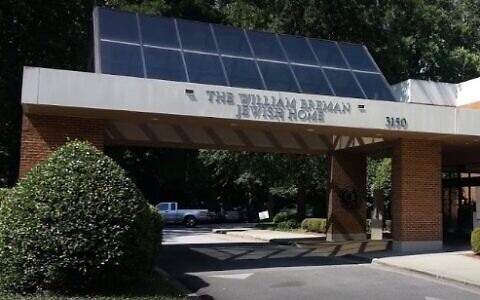 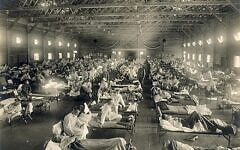 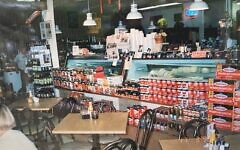 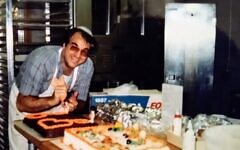 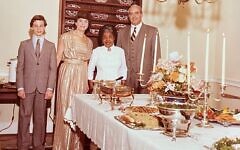 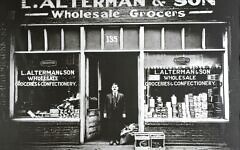