In Torn Blood by David J. Bain, a newly arrived U.S. Embassy official makes his way into Palestinian territory and finds himself trapped in a terrorist plot to destroy Israel.

The Tower of David, also known as the Jerusalem Citadel and in Hebrew as Migdal David, has served as an outer fortification protecting the Holy City since Hasmonean and Herodian times. The tower itself is a Turkish minaret added to a Mamluk mosque, and in fact the connection between the citadel to Biblical King David is in name only.

Migdal David is prominent in any image of the Old City walls. The fortress that served for centuries as a garrison for Ottoman troops is today considered a symbol of Jewish Jerusalem under Israeli sovereignty.

For Palestinians to launch a terror attack from Migdal David “in the heart of the Old City, is symbolic, personal,” says one of Israel’s senior security officials, when confronted with the greatest threat Israel has ever faced in its history.

“The Arabs have never possessed a weapon they haven’t deployed,” he states. The Palestinians have in their possession a biological weapon, one that will affect only Jewish citizens; the Palestinian population of Jerusalem has already been adequately prepared.

Time is running out, and Arab armies are massed on Israel’s borders. Can Israel’s elite commandos disarm the weapon of mass destruction and save the day? 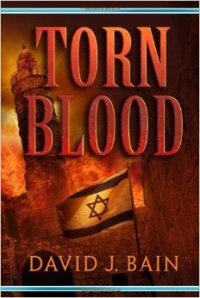 Torn Blood (Bo Iti Press, November 2013) by David J. Bain is a fast-paced thriller that races ahead on multiple plot lines all leading to a breath-taking climax in the heart of Jerusalem. There are so many characters involved that a Cast of Characters listing at the back of the book is frequently visited.

The author’s intimate knowledge of Jerusalem and its history gives authenticity to the suspenseful scenes taking place on its streets and at its ancient sites. What doesn’t work as well is the need for invented Palestinian terror groups capable of handling the unparalleled murderous missions assigned to them in this story. The author should have refrained from his extensive use of transliteration – readers will have a better understanding of shokolad para if it’s referred to as Elite’s cow chocolate. And finally, the book would have been just as suspenseful, and totally complete, even if its length was one-third shorter.

David J. Bain studied at the University of Oregon and the University of Nevada Las Vegas. He worked in the business world for more than 30 years before turning his hand to writing. His collaboration on two screenplays that were made into movies, “End of the Harvest” and “Time Changer” revived his interest in Israel. He currently lives with his wife in Oregon; Torn Blood is his first novel.