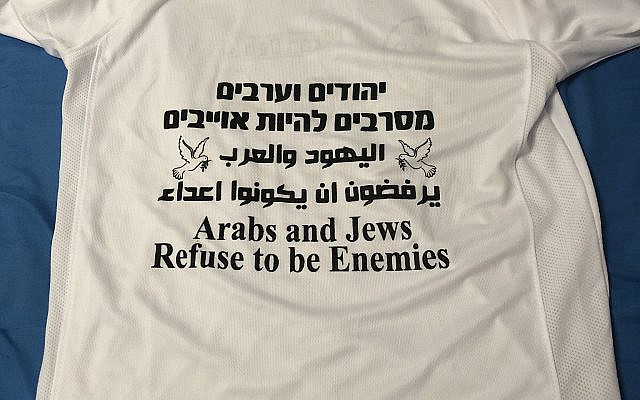 The T-shirt made by our Arab neighbours and friends: Photo by Shoshana Lavan

Walking under the silver laced sky late at night, with our beloved dog Lucy, I look up at the moon, which is not new, in fact, it’s very old, much older and wiser than we all are, and I pray: Help me to help people understand. It’s a simple prayer, on the surface, for a writer who always uses words to explain life. But its complexity confounds me, and I feel despair, against the background booms in the distance.

For this is Israel, and a ceasefire has just been announced to begin at 2 a.m. tomorrow morning, so of course, there are booms in the background. There have been for eleven days.

Only these are actually the fireworks of our nearest Arab village, and our Arab neighbours celebrating a wedding.

For we are in the North of Israel, and things here are very different. Ever since the violence began, Arabs and Jews have been tirelessly working together, organising peaceful protests, visiting each other, planning peace-work activities and talking together.

“My family has been here for five hundred years,” says the father of our Bedouin friend, a restaurant owner in Zarzir, one of the Arab villages closest to us. “We are not moving. We will always be here and we will always be friends with our Jewish neighbours. You are always welcome here.”

His son adds, “Treat this as your second home. You are like family to us.”

(Next week, it will be our turn to host him and his family, in our kibbutz.)

This is just after he has taken us into the back of the restaurant to show us the hundreds of t-shirts he has had printed to give out at peaceful demonstrations, with the words: ARABS AND JEWS REFUSE TO BE ENEMIES, in Hebrew, Arabic and English. His co-partner of the idea, our Jewish friend and neighbour, has already advertised the t-shirts to our Kibbutz and everyone is asking for one.

War or no war, we will be wearing these T-shirts on many occasions. No matter what government is in power, and what terrorist organisation it seems to be playing into the hands of, there are thousands and thousands of Jews and Arabs in Israel who are and will be working together for peace in the Middle East.

This is something the British media has not been reporting. The hundred thousand of protestors marching for Palestine are marching against Israel, when in fact they should be marching against Hamas. It is Hamas who is oppressing Palestine. If we could get rid of them, we could start working towards peace in Palestine and a two-state solution, where equality is paramount, terrorism is totally stopped and the two states live peacefully side by side.

Please do not misunderstand me. I know Israel has a long way to go in order to give every Arab citizen of Israel and Palestine equal rights. I know it is almost impossible with the far-right government which is battling so hard, on its very last legs, to retain some semblance of power, but I also know how many thousands of us are working in peace movements every hour of every day to make the situation better here.

I find it sad and ironic how the British people who believe they are siding with Palestine, by opposing Israel, are actually doing no such thing. They are only siding with the extremists.

In this country, the majority of all people want to live peacefully, side by side. We are happy together. There are Arab doctors, lawyers, teachers, judges, nurses, ambassadors… you name it. There is no apartheid here. There is just a beautiful country living in a very fragile state, under an old moon with silver laced clouds…

…waiting for the terrorists to stop launching their rockets, giving the rest of the world something to misunderstand.