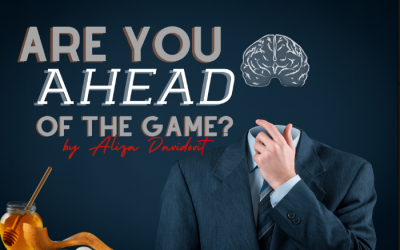 Two indicators tell us a great deal about life and where the world is headed. Firstly, more and more people are suffering from depression in the United States, which ironically is known as the Land of Opportunity. Secondly, the self-help market is booming and was valued at $41.81 billion in 2021. The moral of the story is that people want to change their lives. What is, isn’t good enough!

That longing for something better to sweeten the bitter, for the most part, is a hunger of the soul that we try to satisfy with artificial sweeteners such as materialism, shopping, status, improper relationships, power, and all kinds of unhealthy fillers that are poison for the soul. Hence, our souls are suffering from acid reflux, and it manifests as sadness, depression, endless longing and all kinds of troubles.

As students of life, we certainly know that both physically and spiritually a bad “diet” saps our energy: In the physical realm, simple carbs and processed foods leave us exhausted soon after a meal. In the spiritual realm, the first words we hear from Esau in the Torah are, “I am tired” (Genesis 26:30), a resultant fatigue of his steady menu of sins.

We too continue to feed ourselves all the wrong things on so many fronts. We have bad physical and spiritual habits and as a result, as many stats show, mankind wants change–badly. And yet, a famous quote seems to echo year after year: “The more things change, the more they stay the same.”

Habits. Habits. Habits. We continue to talk the same talk and walk the same walk. Our feet are running the show (pun intended). In fact, in Hebrew, the root word for feet and habit is the same (resh, gimmel, lamed.) That certainly tells us something. The feet, and not the head, are leading the way.

But thankfully, every year, the blasting of the shofar awakens us from our lumbering and slumbering and reminds us that now is the time to change. And if the Torah instructs us to change, it means that we are able to do so.

Rosh Hashanah is not translated as “New Year” for there is nothing “new” about it if tomorrow we behave exactly as we did yesterday. But rather, it is translated as “head” of the year; for just as the head is the command center that should direct the rest of the body so, too, Rosh Hashanah should be the command center that will tell us what to do over the entire coming year.  Think of it as a time release capsule. The energy created and focused on that day will diffuse throughout the 12 months ahead. Set your intentions and then ready and brainwash your body to comply.

Most parents, when sending their children off into the fray of life, tell them: “Be careful and use your head.” But isn’t that advice all rhetoric? What else would we use to engage life? An elbow?

It is only as we grow older that we realize that what we once deemed as a parental platitude is wisdom that no sophist can equal. For even though the head sits as the crown of the body, for most of us, it is every other body part that rules. Our palates salivate, so we grab for the extra cookie; our eyes desire, so we so we touch or take what we shouldn’t; our desires flare, so we reach for the forbidden; our legs grow weary, so we abandon the treadmill; our tongues grow restless, and we unfurl gossip. Our duties as Jews beckon us, but we yield to the temptations of the moment and the seductions of a rotting world.

Quite honestly, unless you’re a tightrope walker, it’s a little embarrassing to think that we are taking life advice from our feet. Did we ever hear of a head of state seeking advice from the best feet among his citizens? They seek out the best minds as advisors! So as the New Year approaches, that farewell warning our mothers and fathers gave us while standing by the front gate should echo with solemnity: USE YOUR HEAD!

Although the lessons of Rosh Hashana are over 5700 years old, modern thinkers are just discovering this wisdom. The key to life is in the HEAD, mind over matter.

We can change. In high school we learned that human beings are made up of atoms. But did you know that atoms are composed of 99.99999 percent energy and only .00001 percent physical substance. So basically, as Dr. Joe Dispenza points out, we are more nothing than something.  That offers hope. It means that our bad habits or all we think we are or are not, isn’t set in stone.  Within that vast realm of energy is infinite potentiality to recreate ourselves optimally in His Image. The distorted shadows our lives cast is because we’ve stepped out of line with His will: “Be holy because I am  holy.”

The power to recreate by getting closer to Hashem and keeping more commandments is ever more accessible during Rosh Hashana because this time of year aligns with the energy of the creation of mankind and the world. So take the potency of Rosh Hashanah into the New Year and be a victor of habit instead of its victim.

Bad habits can be sins because they disconnect us from the Source, keep us depressed, injure our health and keep us limited. We limit ourselves when G-d tells us that the entire world is ours for the taking: “”Be fruitful and multiply and fill the earth and subdue it….” (Genesis 1:28).

Our habits don’t have to be constricting and destructive. Tap into the Source of all life and nothing can stop you.

So, my friends before you put your best foot forward in the New Year, which I pray you do, use your head and let it lead the way to a blessed and amazing new year!