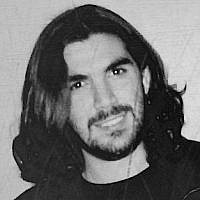 The Blogs
Apo Sahagian
Apply for a Blog
Please note that the posts on The Blogs are contributed by third parties. The opinions, facts and any media content in them are presented solely by the authors, and neither The Times of Israel nor its partners assume any responsibility for them. Please contact us in case of abuse. In case of abuse,
Report this post.

It happened again on Saturday night. A group of students from the Armenian seminary were walking to the Armenian convent when a group of extremist Jewish youngsters harassed them. But the police did not want to listen to that, they didn’t want to hear the fact that in the state of Israel it’s not always us, the goyim, that are the provocateurs. Most of the time, in the Old City of Jerusalem, it is the Jews. At least 20 police officers illegally entered the seminary to apprehend two students whom they accused of giving a black eye to one of their attackers.

These incidents are all too common for those of us who live within the ancient walls of Jerusalem. A year back I was chatting with an Armenian priest when suddenly, out of nowhere, he was spat on by a passing Jewish teen. Once I realized what had happened, I wanted to shove that kid against the wall and remind him of his own people’s history but the priest went on and on about turning the other cheek. I decided to heed his word and be a “good Christian” for that night.

No matter how many times our community and Patriarchate have complained about these harassments, the authorities have been determinedly indifferent. Rather, their response has always been to arrest an Armenian seminary student. The police might never bring this to your attention but not a single such attack has occurred with a Muslim. Why does it happen with Jewish youngsters who walk around the Old City believing it is their inherent right to harass those who differ from their preferred demographic?

The indifference by the police will eventually lead to far worse incidents. I had a preview of that a few years back when we discovered graffiti on of the walls of the Armenian Quarter that read “Death to Arabs and Armenians.” The incident went unreported as the graffiti was quickly washed off. But the authorities continue to act as if such sentiments don’t exist among young Jewish extremists; for them, in the land of the Jews, everyone else is suspect.

Unfortunately, these extremist tendencies are worrying a small community that has never bothered the state. Throughout the decades of conflict between the Israelis and Palestinians, the Armenians of Jerusalem have kept a low profile in their quiet quarter. But don’t mistake us for pushovers. If there is anything we Armenians and Jews share it is tragic histories that have taught us that you cannot always rely on others to defend you and you cannot always turn the other cheek. The application of fair rule and law is a must for a community that has simply given up on changing the apathetic attitude of the authorities. It has reached the point where I overheard someone say to one of the seminary students: “Take the beating. If you react, they will arrest you. You are not Jewish”.

It’s no exaggeration that Israel loves to boast about its ‘growing Christian communities’ in a Middle East that has been increasingly hostile to Christian communal life. But sooner or later, Israel has to admit that in achieving a state in the Middle East, it has also acquired the ills of the Middle East. Occasional consideration to this menace may go a long way in containing the damage.

About the Author
Apo Sahagian is a Jerusalemite-Armenian musician and writer.
Related Topics
Related Posts
Comments