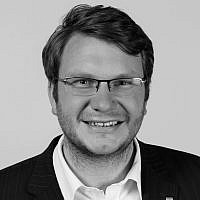 The Blogs
Marian Wendt
Apply for a Blog
Advertisement
Please note that the posts on The Blogs are contributed by third parties. The opinions, facts and any media content in them are presented solely by the authors, and neither The Times of Israel nor its partners assume any responsibility for them. Please contact us in case of abuse. In case of abuse,
Report this post. 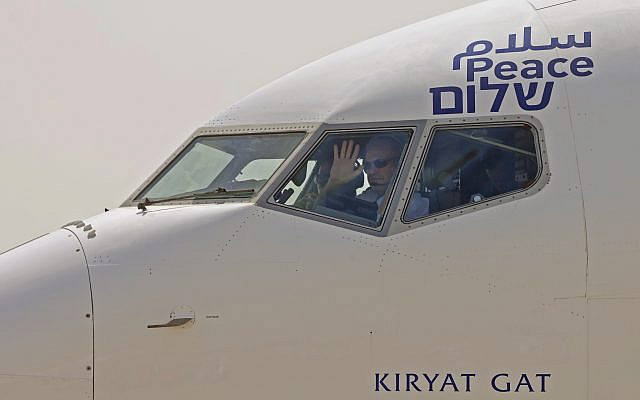 The captain of the El Al airliner which will carry US and Israeli delegations to the United Arab Emirates waves to spectators as the plane prepares to take off on the first-ever commercial flight from Israel to the UAE, at Ben Gurion Airport near Tel Aviv, Israel, Monday, Aug. 31, 2020. (Menahem Kahana/Pool via AP)

The establishment of Israel in May 1948 in the aftermath of the Shoah stands like nothing else for Jews’ self-evident right to exist and the protection of Jewish life. Ever since, however, Israel has also been a modern Sparta, a nation-state located in an enemy desert, akin to a fortress, the survival of which depends on its internal cohesion and its military strength.

That is now hopefully set to change. The Abraham Accords negotiated between Israel and the United Arab Emirates with the help of the US government mark the beginning of a real change in the Middle East, one defined by stability and peace in a region riven by crises. The Emirates were the first to recognize that structural change in the Middle East required new narratives and approaches. Bahrain, Morocco and Sudan have joined in good faith. It is only right that the Arab states now view Israel separately from the Palestinian conflict. In this way, bilateral relations can be expanded and the stability of the region as a whole strengthened. It is only a matter of time until further Arab states follow suit. German foreign policy should also, finally, comprehend this.a

Until 2015, Germany was the country that a majority of the Israeli population trusted to act as an “honest broker.” The fact that it was the Trump administration and not the German Foreign Office that moderated the negotiations that produced the Abraham Accords speaks volumes. It should come as no surprise that Israeli policy is distancing itself from Germany. How quick are we when it comes to condemning Israel’s actions in front of the global community, and how often do we hesitate to defend Israel’s legitimate interests? That also applies to the Palestinian conflict. The fact that Israel’s security is among the basic principles of the German state cannot crumble into empty words. Our foreign policy should no longer hide behind the Oslo process. We need to recognize the reality as it is ultimately laid out in the Abraham Accords: the Oslo process no longer represents a viable path for any of the parties involved.

The structures in the Middle East have fundamentally changed, new Jewish-Arab alliances are being created. Old conflicts are being put aside in order to meet the current challenges in the region, namely the imperial aggressions of Iran and radical Islamic terrorism. This is all clearly in the interests of Germany. In contrast, a two-state solution between Israel and Palestine scarcely has credibility any longer among the parties involved. This needs to be recognized and integrated into our policies. In order to help shape a new tomorrow, we cannot place yesterday’s hurdles in our way. This makes it all the more difficult to understand why the German Federal Foreign Minister has sidelined German-Israeli relations.

Whether it’s the question of military drones or structural change in the Middle East: left-wing forces increasingly appear to prevail within the SPD. This leads to key decisions being missed out on and our friends turning away from us. German foreign policy urgently needs a reset and can no longer simply stand by and watch as the new structures for change in the Middle East are put in place. Instead of being a spectator on the sidelines, Germany must once again be a player in the Middle East!

About the Author
Marian Wendt is a member of the German Bundestag from the Christian Democratic Union.
Related Topics
Related Posts
Comments