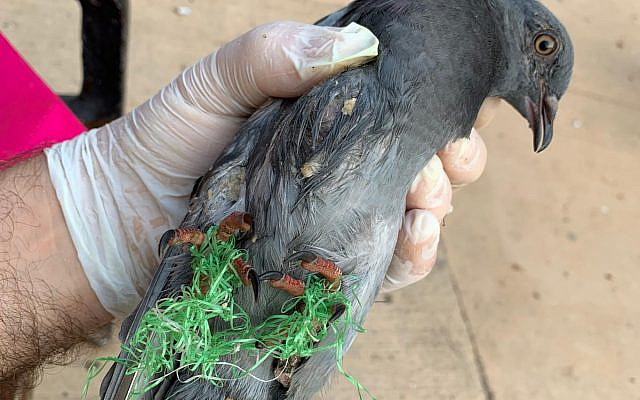 Entangled Pigeon photo by A. Goodman

Tel Aviv, the heart of the start-up nation, bursting with big ideas, building one new skyscraper after another, not to mention a cutting-edge light rail system, has a pigeon problem. And I’m not talking about pigeon poop. I’m talking about animal suffering.

Yes, I know, pigeons are small potatoes. Compared to global warming, the Delta variant, the Israeli-Palestinian conflict, women’s rights, and homelessness, pigeon problems don’t strike many as a serious issue. Some people think of the birds as nuisances, not much higher up the repellent-pest list than rats.

That said, Tel Aviv’s pigeon problem may reflect a challenge the city faces as it seeks to position itself among the great cities of the world.

Smaller than Milwaukee, a pint-sized bantam compared to condors like New York, Paris, and Berlin, Tel Aviv struggles to keep sidewalks across the city clear of dog crap and cigarette butts. If it wants to fly with the big birds, it’s got to do a better job of handling the basics.

The particular pigeon problem I’m raising here has gone unattended for the past eight months, with no relief in sight. The frustrating thing is that a simple solution is right in front of their faces — if only the municipality’s people will open their eyes.

I’m talking about pigeons who frequent Gan Meir, one of the city’s most popular parks, named after Tel Aviv’s first mayor.  The pigeons there are suffering, because the city has yet to replace grass covering an area perhaps the size of a soccer field with sod that does not have plastic netting holding it together.

The synthetic strands wrap around the birds’ legs, hobbling them and cutting off blood flow.  Even those who don’t care much about pigeons, can’t endorse having them dodder about, their feet disfigured by plastic shackles. 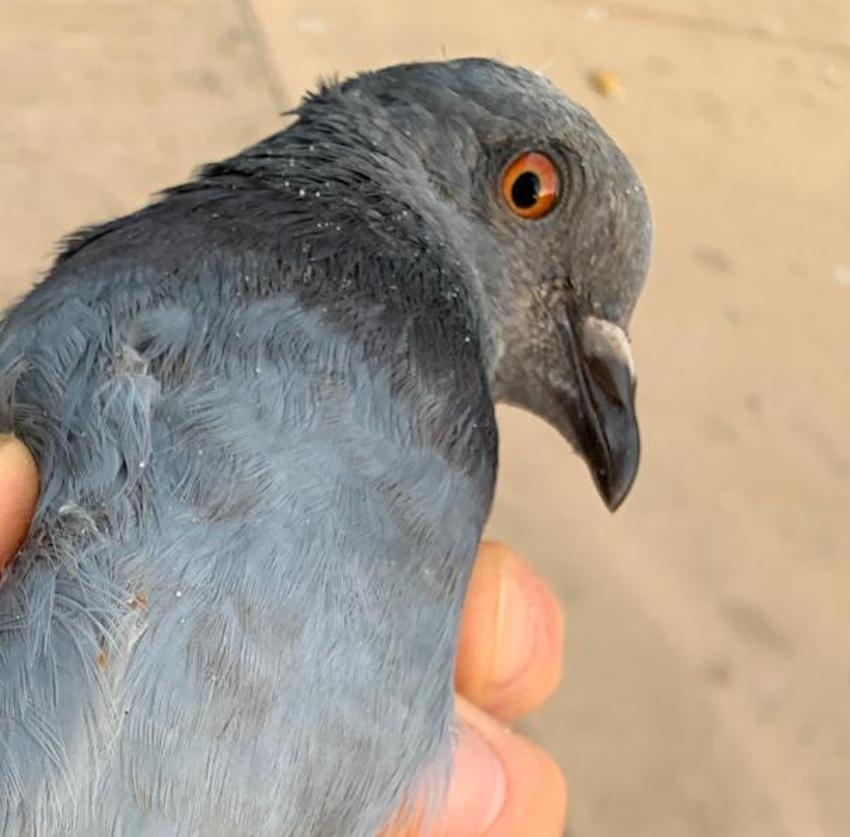 Pigeon In Extremis. photo by A. Goodman

Fortunately, Gan Meir’s pigeons have a champion. A local man who has been feeding them every morning for over two years noticed the plastic netting problem last winter.  He emailed the municipality, with 40 other people adding their names to his message, appealing to the city to replace the synthetically tainted grass with more natural sod. A city official told him staff planned to fertilize and water the grass soon, and they would keep him updated on their progress. The plastic netting stayed where it was, so the man wrote again…and again…and again.

Meanwhile, the pigeons’ friend, who prefers to remain anonymous, has taken matters into his own hands. Every morning, after setting down food, he separates any suffering pigeon he can find from the flock and disentangles its legs. This can be anywhere from 2-5 birds a day.  For the record, he takes a picture of every bird he saves.

He is not optimistic that the city will get its act together soon, if ever.  But if you’re reading this, you might make a difference. And you don’t have to be a voting Israeli citizen or a resident of Tel Aviv.

In fact, if you’re reading this from outside the country, your complaint may land with a bigger bang on the municipality’s desk. So, in case you want to add your voice,  you can contact the Tel Aviv-Yafo Municipality with two clicks on the web.

As Tel Aviv continues to burnish its image to entice tourists and join the ranks of great cities, it can do better by its pigeons.