On 24 and 25 July, Turkish fighter jets bombed Kurdish PKK bases in Quandil in Iraqi Kurdistan as well as ISIS in Syria.

US backed Turkey’s actions as “the right to defend itself” against “PKK terrorist attacks”, referring to the PKK’s retaliation against Turkish police and soldiers suspected of collaborating in the ISIS bombing of the Kurdish town Suruc, which killed 32 people and injured 100 others.

Some Kurds accused the US of striking a Faustian bargain for tolerating renewed Turkish assault on Kurds in exchange for use of Turkey’s Incirlik air base against ISIS for the first time.

This prompted Patrick Cockburn from The Independent to argue US may have made its worst mistake since invading Iraq — further destabilizing Turkey, forcing Kurds to now fight a two-front war against ISIS and the Turkish army, and benefiting ISIS due to “the US switch in alliances because some PYD fighters in Syria will now return to fighting the Turkish army.”

Indeed the Kurds — whether PKK, PYD, YPG or Peshmerga — are the most effective boots on the ground against ISIS. Yet the White House continues to call its most loyal ally in the anti-ISIS coalition as terrorists in order to appease Turkey.

Last October Bernard-Henri Levy penned an article in The New Republic urging the U.S. to “Stop Calling Our Closest Allies Against ISIS ‘Terrorist’,” noting that it was the PKK-affiliated PYD unit that in the space of 10 days, succeeded in saving 70,000 Yazidis stranded on Iraq’s Mount Sinjar. It was the PKK that also rushed to help the Peshmerga repel ISIS.

Gareth Jenkins from Johns Hopkins University’s Central Asia and Caucasus Institute also argued that on the battlefield PKK units have consistently outperformed both the PYD and the Peshmerga and “the willingness of its militants to sacrifice their lives in defense not only of their fellow Kurds but also of Christians, Yazidis and even Turkish-speaking Turkmen has considerably enhanced the PKK’s reputation both inside and outside the region.”

Contrast this with Erdogan’s Turkey watching with perverse indifference as ISIS committed genocide against Kobani Kurds even while supporting its jihadi Army of Conquest that regularly slaughters Christians, Yazidis, Druze, and other ethnic and religious minorities in the region.

When the world sees the Obama administration — and by extension America — abandons allies, lacks moral clarity, and compromises its values by partnering with double-minded regimes, it is no wonder that U.S. allies are looking elsewhere for more attractive partners.

Patrick Cockburn observed that PKK may now “seek support from Iran and from the Syrian government in Damascus, with which it formerly had close relations,” but he neglected to mention another powerful ally from the East — China.

In face of recent China-Turkey clash over Ankara’s recruitment of Chinese Uyghurs as “cannon fodder” for ISIS , this may further compel China to support the Kurds and the PKK.

In fact, another US ally Egypt, frustrated with Obama administration’s continual support for the Muslim Brotherhood, is now pivoting east and on 2 June submitted an application to join the China-led “Asian NATO” — the Shanghai Cooperation Organization (SCO).

In a July 2014 summit in Tashkent, China-led SCO also considered merging with the Russian-led military alliance of Collective Security Treaty Organization (CSTO), since most of their members overlap. From 2012-2015, Iran, Egypt and India held talks with CSTO on observer status and possible membership, with Iran currently having the status of a candidate country.

With new nationalistic leaders of Putin, Xi and Modi at the helm, even Russia, China and India are setting aside their strategic rivalry in the Eurasia heartland and in May announced they would conduct their first joint counter-terror exercise later in the year — united by the common threat of ISIS and sunni radicalism destabilizing their homeland.

During the same month China and Russia also conducted “Joint Sea 2015” naval war games off the Syrian Coast, immediately followed in June by Egypt and Russia’s “Friendship Bridge 2015” naval exercise near Egypt’s Port of Alexandria, where Russia is eyeing to establish a new naval base.

Unlike Washington, the Middle Kingdom recognizes Egypt, with its size and control of the Suez Canal, is key to stability in the Mideast. With China displacing the US in 2013 as the world’s largest trading nation at $4 trillion, and with 90 % of trade still being seaborne, Beijing is heavily dependent on the Suez Canal to reach its largest export market in Europe.

However, China’s vital trade route through the Canal is increasingly under threat, as in 2013 Al Qaeda affiliate Al Furqan Brigade attacked China’s Cosco Asia by firing rocket propelled grenades (RPGs) at the container ship with 10,000t of cargo en route to northern Europe.

As such a new geopolitical realignment in the Mideast seems to be emerging with Egypt, China, Israel and the Kurds linked by their tensions with an increasingly Islamist Turkey as well as interests in maintaining stability in the Suez Canal and Eastern Mediterranean, where China’s maritime Silk Road traverse to reach its terminus point in Europe.

Indeed, with the new US-Turkish alliance and support for Turkey’s Kurdish policy, the Kurds may now find a new ally with a rising China in the Middle East.

China’s pivot to Iraq and Kurdistan

China is currently the largest oil and gas investor in Iraq, and under Xi Jinping’s helm it is now entering a new phase of military pro-activism to protect the Middle Kingdom’s overseas interests–deploying troops abroad, establishing military bases in the Indian Ocean, and conducting naval war-games in the Mediterranean. 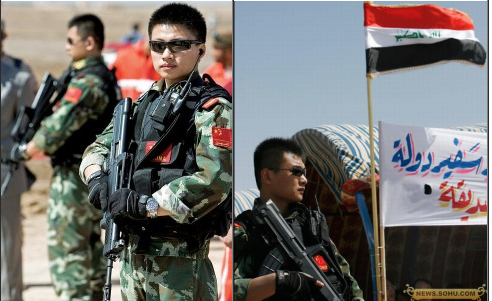 In fact the Sudan/South Sudan model may be instructive for Iraq/Kurdistan. For many years China backed Khartoum with weapons and financing, but when oil-rich South Sudan declared independence, China had no qualms offering an olive branch and has now deployed over 1,000 troops (including a battalion of 700 combat troops) under UN banner to protect its oil interests in Juba.

Likewise in Kurdistan, China’s energy giant Sinopec entered the Kurdish market in 2009 when it took over Addax Petroleum which had assets in Kurdistan’s Taq Taq field as well as Africa.  Sold for $7.2 billion, this was the largest-ever international takeover by a Chinese oil and gas firm.  Seventeen other Chinese companies, including oil and gas service company DQE, operate in Kurdistan.

In September, China established a new general consulate in Erbil, in midst of negotiation for the potential sale of 4 million barrels of oil. A 17 September Reuters article noted that should Erbil establish a buyer as large as China, it could provide reassurance to other countries and companies that would like to buy oil from the Kurds but fear crossing Baghdad.

Additionally, oil-rich Kurdistan is desperate for money and weapons, and China has both the cash and history of bartering goods for oil (e.g., infrastructure projects for oil, soft loans for oil, arms for oil). So long as US continues to handcuff the Kurds by blocking sale of their oil in the market and demand they continue to wait for seemingly illusive arms from Baghdad, the Kurds would likely warmly welcome such a deal.

After all, it certainly seems US has never been a true ally of the Kurds — using them when Washington needs their help and throwing them away when someone sexier come along.

As Kamran Karadaghi, an Iraqi Kurdish commentator and former chief of staff to the Iraqi President, Jalal Talabani lamented, “Maybe they calculate that with Turkey involved on their side, they don’t need the Kurds.”

The US also no longer needs oil from the Middle East, whereas an increasingly energy-hungry China has more skin in the game in Iraqi and Syrian stability.

Thus as US trade in the Kurds for use of Turkish airbase, in addition to setting up a haven in northern Syria to eject ISIS and train Turkey’s “moderate rebels” — the Army of Conquest that includes Chinese Uyghur jihadists, this would likely provoke Beijing to arm the PKK and back Kurdistan — both to defend its oil interests in Erbil, as well as a new frontline to combat ISIS and Turkey-sponsored Uyghur jihadists that threaten to attack the Chinese homeland.