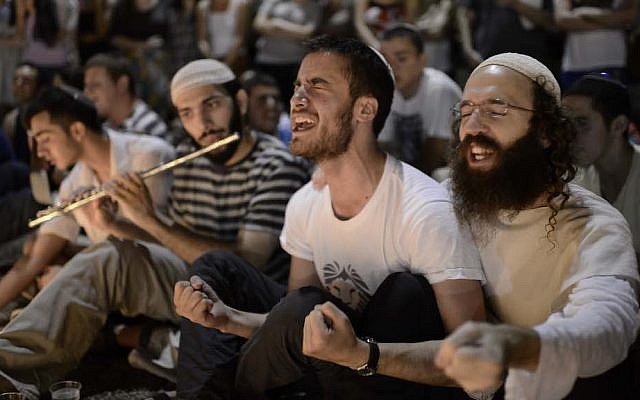 As we enter Rosh Hashanah, I am, like many of us, a confusion of emotions. I am angry and fearful, grieving and grateful, proud and ashamed and, despite everything, hopeful.

I am angry at how, once again, much of the world has turned an Israeli war of self-defense into a war crime. I am angry at the UN for investigating Israel and not Hamas, at much of the media for falling into Hamas’ trap and blaming Israel for civilian deaths it tried to avoid, at Israel’s critics who seemed disappointed that there weren’t more dead Israelis, as if somehow that would have been more fair.

I am grieving for the fallen soldiers. In Israel a soldier killed in battle doesn’t become a martyr but everyone’s son – a husband, a father, a boyfriend. I grieve too for the three kidnapped boys, murdered as their kidnappers laughed and sang. I am grateful for the nobility of those boys’ mothers, who inspired the people of Israel with their courage and love.

I am fearful for the future of Israel in a region that is turning mad. Fearful for an Israel surrounded by Hamas and Hezbollah and Al Qeida on its borders and Islamic State moving toward the Jordanian border, and with a nuclear Iran becoming more of a reality with every passing day, even as the West negotiates and delays.

I am grieving for the ongoing tragedy of the Palestinian people. For all my anger against Palestinian leaders for poisoning their people with hatred, on Rosh Hashanah I ask God’s forgiveness for what we have done to contribute our share to maintaining the conflict and the suffering. In public, in a political context, my contrition requires Palestinian reciprocity. In prayer, before God, I am required only to face myself.

I am angry at the growing attempt to criminalize the Jewish state, turn the Jews again into the world’s symbol of evil. Angry at the way our history, our story, the essence of our identity, is being distorted by a campaign of lies and half truths. Angry that, the more we succeed in re-rooting ourselves in the land of Israel, producing one generation after another of native Israelis, the more our rootedness, our nativeness, is denied.

I am grateful that, in Israel, the Jews have finally learned to defend themselves, grateful that we have the means and the will to thwart the murderous intentions of our enemies. And I am proud of the heroism of our sons who went into Gaza’s tunnels and booby-trapped houses, who fought not to avenge but to protect.

This Rosh Hashanah I also feel shame. If we had asked ourselves, a few months ago, whether it was possible for Jews – any Jews – to kidnap a teenage boy and burn him alive, our answer almost certainly would have been: Not that. In the following days, young Jews marched in the streets of Jerusalem and chanted, “Death to the Arabs.” As if that death hadn’t sufficed.

I am entering Rosh Hashanah committed to doing all I can to defend Israel from those outside our borders who hate and vilify it – and also from those among us who express their twisted love for the Jewish people with hatred for others, who endanger the precious miracle of Israeli democracy.

I believe we will persevere. I believe this because Jewish history – events we ourselves have witnessed – insists that despair is always premature.

I resist the fatalism contained in the terrible words: The whole world hates us. Israel may well have more active enemies than any other country, but it also has more active friends – and by no means all of them Jews. The largest pro-Israel demonstration this summer happened not in New York or Toronto but in a city without Jews – Calcutta – where thousands of Hindus, Buddhists and Sikhs affirmed Israel’s right to self-defense. This summer in China, social media was reportedly overwhelmingly pro-Israel. One of the most powerful condemnations of the link between Jew-hatred and Israel-hatred was expressed at a rally in Berlin by Germany’s Chancellor, Angela Merkel. Among the protesters were thousands of Kurds, Syrian Christians and Africans.

We will persevere because the Jewish fanatics of the far right and the far left — those who have a ready answer to all our dilemmas and who contribute, each in their own way, to Israel’s isolation – are a minority. Most Jews instinctively know that to be a Jew means to balance paradoxes – security and morality, realism and vision, particularism and universalism, self-defense and self-critique.

This year especially, I will pray that we have the wisdom to hold together as a people, despite the growing pressures on us to fragment and turn against each other. I will pray for the courage to defend the justness of our return home against the big lie that is aimed against us, even as we admit where we have erred.

Most Jews share the same hope – of a strong Israel at peace with its neighbors. We will continue to argue about the best way to achieve that – but as partners, aware that there are no easy answers, that none of us can speak for the totality of Jewish wisdom, that we need each other’s insights to be a whole people, that we cannot thrive without being a whole people.