The Blogs
Mendy Kaminker
Apply for a Blog
Advertisement
Please note that the posts on The Blogs are contributed by third parties. The opinions, facts and any media content in them are presented solely by the authors, and neither The Times of Israel nor its partners assume any responsibility for them. Please contact us in case of abuse. In case of abuse,
Report this post. 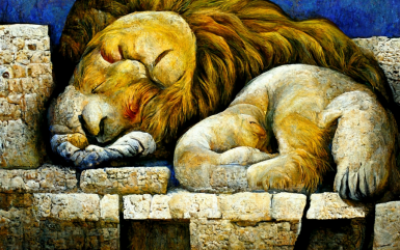 A sleeping lion in the streets of Jerusalem. Generated by AI (Midjourney)

Which animal are you?

The internet is filled with those silly quizzes that can help you answer the “crucial questions” in life. Questions such as: which wine matches your personality? Are you an introvert or an extrovert? And of course, which animal are you?

We all know those games are pretty meaningless, but once in a while, we fall for the clickbait and click. So last time I checked, I was a bear. The time before that, I was a dog. And the first time around, I was a dolphin. I think I am going through an identity crisis.

Instead of playing those silly games, I should have just studied this week’s Parsha! Because the Torah tells us, in unambiguous terms, which animal we are similar to.

This is a quote from the prophecy of Balaam, the gentile prophet hired to curse the Jewish people. As the story goes, his plan was foiled, and instead of curses, he showered us with blessings.

So this is it. We are like the mighty lions and lionesses.

Except… why are we… crouching?

Balaam was foreseeing the times of exile when Jews would be attacked and persecuted. Yet, despite all challenges, we will still be compared to a sleeping lion.

A sleeping lion is a lion nonetheless.

A sleeping lion is not controlled by other animals (as we know, lions have very few predators to fear). And although it’s crouching, the lion’s strength has not been diminished at all.

During the many years of exile, the “Jewish lion” has been subjected to many oppressors. Yet it is only our bodies that can be controlled by others. Our source of inner strength – our souls! – cannot be controlled by any outside forces. It always remains intact and as powerful as ever.

So don’t let the internet fool you. Oh, and don’t let the mirror fool you either. Even at times of weakness, when you look at the mirror and see a meek lamb, remember that deep inside, there is a lion. A powerful soul that is always connected to G-d and can achieve anything.

All you need is to wake it up.

About the Author
Rabbi Mendy Kaminker is the Chabad Rabbi of Hackensack, and an editorial member of Chabad.org.
Related Topics
Related Posts