Have You Asked a Good Question Today?

In mid-May I was at the JEIC Innovators’ Retreat in Boston. The Mayberg Foundation’s JEIC — Jewish Education Innovation Challenge — funds, unsurprisingly, innovation in Jewish education, and in addition to seeding new initiatives in day schools, also formed HaKaveret, a group of ten Jewish education “designers,” tasked with coming up with new models for the field. I was fortunate enough to be one of the designers this year. Not only did the ten of us present our models for feedback — the final versions of the models are due in July, so the participants at the retreat were able to provide us with constructive critiques — but the two schools that won grants from JEIC also shared their initiatives.

One of the presenters began with a story, recorded in the New York Times:

Nobel prize-winning physicist Isidor Rabi, who died in 1988, was asked: “Why did you become a scientist, rather than a doctor or lawyer or businessman, like the other immigrant kids in your neighborhood?’’

His answer: “My mother made me a scientist without ever intending it. Every other Jewish mother in Brooklyn would ask her child after school: ‘So? Did you learn anything today?’ But not my mother. She always asked me a different question. ‘Izzy,’ she would say, ‘did you ask a good question today?’ That difference — asking good questions — made me become a scientist!’’

I worked over the course of the year with Rina Hoffman and Michal Smart, two talented educators, on an educational model we’ve called Hineini*: The Inquiry Beit Midrash. In the model, a student finds a question s/he wants to explore in Judaism, researches Jewish texts and sources pertaining to the topic, finds current role models engaged in it, and creates a product or event that shows evidence of the learning and makes actionable some aspect of the issue. Along the way, students reflect on how their learning and action affects them.

Our model is born out of the fact that often students don’t get to ask questions — good or otherwise — in their classes, and I’m only sorry we didn’t remember the Isidor Rabi story when we got up to speak about our Inquiry Beit Midrash. What we did share was a chart from the Right Question Institute (yes, there is such a thing) that shows a significant decrease in the number of questions students ask as they progress through school. 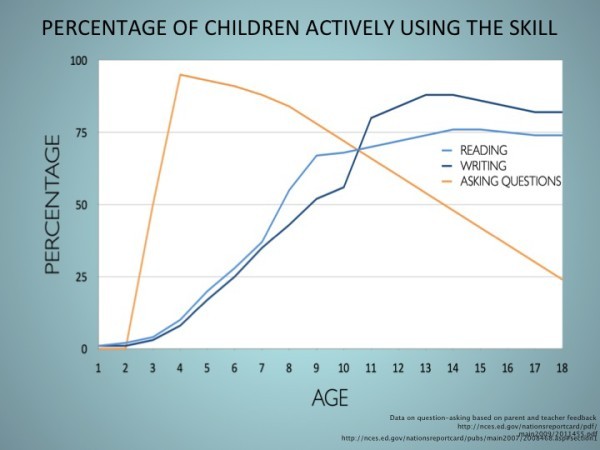 Courtesy of the Right Question Institute

Now, a number of factors might be responsible for the decrease in queries: as children grow and begin to make sense of the world and the way it works, they learn the answers to many questions and so don’t need to keep asking so many. As well, when children learn to read and can access information by themselves, they don’t need others to help answer their questions.

But let’s be honest: a large reason why kids stop asking questions is because we stop letting them. The irreverent educator and social critic Neil Postman wryly observed that school is a place where students learn the answers to questions they don’t have.

That’s why the first part of the Inquiry Beit Midrash model is sparking inquiry. We want to start working students’ questioning muscle again. And there are techniques that you can use to do this. The Right Question Institute has a rather elaborate one called the Question Formulation Technique (QFT), where students get to think, for example, about whether questions they ask are “closed” or “open-ended,” that is, whether they have “yes” or “no” answers, or wider and more complex ones.

In our research, we also discovered educators who asked students to consider curiosity-based questions and problem-based questions. Curiosity-based questions stem from a wondering, something you become curious about. You may see a beautiful sunset, become curious about what makes sunsets so gorgeously colored, and subsequently explore the physics behind them. On the other hand, a problem may spark inquiry: you may notice the number of homeless people in your town has increased, and that may lead to your studying the reasons why.

Project- or problem-based learning (PBL), an educational model becoming increasingly popular today, is centered around an essential or driving question that a learning unit seeks to answer. At a recent parlor meeting for The Idea School, the high school my colleague Rabbi Michael Bitton and I are starting, we asked attendees to participate in a mini-PBL unit. Our essential question was: how do you cultivate a good habit, and how do you break a bad one?

We asked participants to generate further questions about the essential question, and we loved Daniel Schlosberg’s response, which was: how do you even know you have the right question?

When we ask students to differentiate between open and closed questions, what we’re asking them to notice is that open-ended questions are a lot more fascinating, since they lead to further questions and ideas. When students have to generate questions based on topics they wonder about or problems that concern them, they soon realize that those topics are complex and that they’re going to need to ask more questions before they narrow down the line of inquiry they might want to pursue. Reasons for homelessness, for example, might be multifarious.

What’s fascinating about this exercise, though, is that arriving at the right question isn’t like getting the right answer in a more traditional classroom. What do I mean? Many times, teachers throw out questions to students in class, and their expectation is that students will get the answer “right.” For example, Professor Snape, in the first Harry Potter book, asks his Potions students, “Where would you look if I tell you to find me a Bezoar?” Clearly, there’s only one correct answer to that, which Hermione knows.

And of course J.K. Rowling has created a satire in the character of Hermione, that most obnoxious of students who always gets the answer right and makes everyone else look bad. But in sparking inquiry in the classroom and making it a place where there isn’t one right answer, but rather a place where students have to discover the right question, we upend a lot of traditional notions about what success means in school.

One of the things that makes the Harry Potter series so enjoyable, actually, is that we constantly find Harry, Ron, and Hermione accessing the knowledge they’ve acquired and applying it to real-life situations. For example, Harry remembers that a Bezoar “is a stone, taken from the stomach of a goat” that will save a person from most poisons. When Ron is poisoned in the sixth book, Harry remembers the Bezoar’s life-saving properties and saves his best friend from death.

While the Bezoar incident shows the importance of simply knowing the right answer sometimes — Harry wouldn’t have saved his friend if he hadn’t been able to recall the basic information of what a Bezoar does — the Harry Potter series shows that the application of learning is what matters. In fact, in the last book of the series, even the studious and book-loving Hermione has decided to leave Hogwarts and join Harry and Ron in order to do what’s needed in the world: fight the evil that Voldemort is.

It’s crucial to get kids thinking about open-ended questions or wondering about the world and its problems. If there’s only one right answer to a question, students don’t develop sophisticated ways to think about their environment. I’ve heard the thorny issues we have to address in the world today described as “wicked” problems: they don’t have easy answers and require complexity of thought and action in order to be solved. They demand people who have advanced analytical and problem solving skills and who are flexible and agile in their thinking. These are people who are comfortable with ambiguity and complexity, and can think in creative ways. In order to start solving wicked problems, these innovators know how to ask good questions — and get to the right ones.

Getting My Own Back

I returned to the classroom after my trip to Boston, in time to start preparing my AP English Language students for their final exam. The essential question we’ve been exploring all year is “What does it mean to be an American?” and we started looking back at the texts we’d read, some that glorified the American ideal of freedom and equality for all and some that interrogated it by revealing the way minorities, particularly blacks, have been and continue to be mistreated. Suddenly, one of my students, Sarah Zeitoune, asked me, “What’s your ideal class in America to be teaching this curriculum to?”

I stopped, arrested. In all the many years I’ve taught this course, no one had ever asked me that, and the question suddenly made me think about the many classrooms all over the country where I might explore our class’ syllabus. I wondered, Where would I like to be?

But then I realized that the answer didn’t even matter. The question was such a good one because it had many answers.

And none of them would be wrong.

*Hineini means “Here I am,” and can be seen as the answer to the question God poses to man, “Ayekha: where are you?”