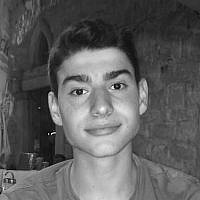 The Blogs
Jordan Rothschild
Apply for a Blog
Advertisement
Please note that the posts on The Blogs are contributed by third parties. The opinions, facts and any media content in them are presented solely by the authors, and neither The Times of Israel nor its partners assume any responsibility for them. Please contact us in case of abuse. In case of abuse,
Report this post.

While the movement to Boycott, Divest, and Sanction Israel (BDS) remains largely unsuccessful at both the governmental level and in Israel/Palestine thus far, there’s no question that BDS is popular at the grassroots level, notably on American college campuses. The movement is creating a new generation of progressives that are opposed to a two-state solution for the Israeli-Palestinian conflict, and this trend is only becoming stronger and more difficult to combat.

Whatever some adherents of the BDS movement may stand for personally — which could include a two-state solution — the group’s leadership has articulated its preference for a single state of Palestine, and the right of return of Palestinian refugees to their former homes in Israel is a stated goal of BDS. While this proposed solution might be considered just for those who were wronged in the founding of the State of Israel, it is not constructive because it is uncompromising and is ultimately not mutually beneficial. A prerequisite for any peace talks is recognition of the legitimacy of each side; offering the right of return to millions of refugees and their descendants would be the end of Israel as a Jewish state. This potential outcome is obviously a non-starter for Israel and has only led to the complete vilification of the BDS movement by the supporters of Israel on both the Right as well as the Left. This, in turn, allows BDS supporters to paint Israel as an enemy and not a negotiating partner, further perpetuating the movement’s desire for a single, non-Israeli state.

At Swarthmore College, where I am currently a freshman, a petition by Swarthmore’s Students for Justice in Palestine, an organization affiliated with BDS, to divest from companies that they claim support Israel’s military control of the West Bank garnered over 1,000 signatures. While this might not seem like a large number of people, it is significant in a school with just over 1,600 students. The spirit of BDS can be felt all around the campus, despite the fact that the petition was ultimately struck down by the Swarthmore Student Government.

Last fall, activists soliciting for signatures would stand at the entrance to the school’s dining hall and ask incoming students if they supported Palestinian human rights — an easy question at this overwhelmingly liberal college — and if so would they be willing to sign the BDS petition. I, as someone who is supportive of everyone’s human rights, felt uncomfortable walking by their booth; while of course I support Palestinians’ human rights, I do not support BDS. Unfortunately, by not signing the petition, I appeared to some as if I don’t support Palestinian human rights. My support for Palestinian human rights does not negate my support for Israeli human rights, which would undoubtedly be infringed upon in a future painted by BDS. I walked past their booth for every day weeks, watched them looking at me and was pained by the thought that their binary choice somehow made me into the oppressor.

I have learned to try to avoid any debate with BDS supporters on campus — I have found it an exercise in futility to try to change anyone’s mind — but there is one interaction that sticks out in my mind. Recently, I found myself face to face with a fellow freshman who is also a BDS activist. As the discussion was already on the subject of Israel/Palestine, knowing her background as a one-stater, I gently tried to engage in a friendly conversation. But to her, despite my progressivism, I’m just a Zionist with whom there can be no compromise, and she refused to talk to me.

This generation of progressives is aiming to dismantle oppression wherever they see it, for good reason. The images coming out of Israel/Palestine today make it very difficult for the nuance of the conflict to emerge, as Israel is the occupying power and its casualties are far lower than in prior eras of the conflict. In the popular narrative, the Palestinians are overwhelmingly perceived as the victims in this conflict. The worldview perpetuated by BDS fits in with this reality, leaving this entire generation of social justice-inclined progressives susceptible to finding greater fault with Israel. With the current US administration’s seemingly unquestioning support for the current Israeli government, criticisms mounted by Representative Ilhan Omar and other advocates of BDS make the once bipartisan backing of both Israel and the two-state solution ever more tenuous. If trends continue in this direction, it will transform mainstream American politics away from Israel and a two state solution in the near future.

I firmly believe that a negotiated two state solution is the only way to ensure Israel’s continuity, because eventually, demographic and regional trends will threaten its statehood. When Israel finally recognizes this new reality, it may not have the pro-peace United States supporting it that it had in prior negotiations. From what I’ve seen at Swarthmore, this day is coming sooner, rather than later.

About the Author
Jordan Rothschild is a student at Swarthmore College, originally from New York City, and a passionate advocate of Jewish continuity.
Related Topics
Related Posts
Comments