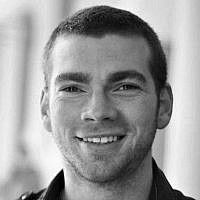 The Blogs
Jake Campbell
Apply for a Blog
Please note that the posts on The Blogs are contributed by third parties. The opinions, facts and any media content in them are presented solely by the authors, and neither The Times of Israel nor its partners assume any responsibility for them. Please contact us in case of abuse. In case of abuse,
Report this post.

One of the most impactful Jewish learnings on my life was studying the Talmudic story of Choni the Circle-maker during an immersive professional development experience as a part of Hillel International’s Ezra Fellowship. A sage of his generation and well adored, Choni falls into a deep 70-year sleep without aging. Upon waking, he was without companionship with none believing he was who he claimed to be. Filled with loneliness, he prayed for mercy and died leaving us with the lesson – “Either chavruta or mituta,” “either friendship or death”.

Moving countries is terrifying, expensive and incredibly humbling and I was reminded of this fact for the second time when I decided to move from Sydney to Baltimore just 2 months ago with nothing but 2 checked bags plus carry-on luggage to my name. Your whole life is Marie Kondoed. It is a complete restart – new lease, new car, new furniture and appliances. The bureaucracy is new too and something as simple as purchasing a lease or car, or starting a bank account, becomes a monumental task often feeling as though you’re at war with the very country you’re trying to move to. Even the most mundane becomes difficult. Grocery shopping, which would once-upon-a-time take 30 minutes if, becomes a two-hour journey as you relearn brands, product names and where in the store everything is located. Navigating the imperial system is dangerous– the gym becomes a terrifying place when you accidentally forget that America doesn’t use the metric system and all of a sudden you’re running 12 miles an hour on the treadmill fearing for your life because you thought you typed in 12 kilometers.

While relearning how to be an adult and navigating all this change, the last thing you want to be doing is also searching for your people. I have made the move from Sydney to the States before – last time to Tallahassee Florida, a southern college town with 120 thousand people, around 40 thousand which stay in the Summer with almost everyone either under 23 or over 40. While that time I was helped through these changes by a wonderful boss who often acted as a mother to me and who I will always consider a mentor, not having a community where you belong while navigating a new life can be fatal to your mental health. Indeed, despite the efforts of my boss and students, and despite my fondness for drinking and football my two years in Tallahassee will be remembered as my hardest and loneliest – a period of on and off again depression that I was never really able to shake.

Baltimore, however, is unlike any Jewish community I have visited or lived in before in its commitment to welcoming the stranger. Not once have I felt alone or without community. Rather the opposite, my chief anxiety has been a fear of offending others by turning down their offers of help, or invites. I am yet to be left wanting for an invite to a Shabbat dinner 2 months in and have been inundated with support in navigating the bureaucracy or even just in experiencing everything this wonderful city has to offer. In fact, proving how caring this community is, when I found myself in the hospital and posted on social media at 1 am in the morning people who had barely known me for over a month, some for barely a week, were sending me text messages to check in be sure I was okay. The Jewish community of Baltimore is unlike any other in kindness and care, and one must ask “why?”

Perhaps it is the community cohesion. Where rabbinical divisions often exist between and within denominations, that does not seem to be the case in Baltimore. When congregational leaders aren’t concerned with fighting unwinnable battles with other leaders and denominations they can focus on community building and outreach. The culture of a community often follows from the example of its leadership. Maybe it is effective community planning and allocation. The Associated Jewish Federation of Baltimore, supporting over 25 programs stretching the whole Jewish lifecycle, takes a particularly strategic and transparent methodology to community planning that has led to a community that punches well above its weight in ensuring that Jewish life not only exists but is exciting to be an active part of. Indeed, Moishe House, a program supported by The Associated, has been a particular home for me offering a Jewish community as a young adult that I can engage with on my terms. Or, maybe, it is just an inexplicable miracle of this community that people just feel the need to welcome those coming to a strange land.

Whatever the reason, the Baltimore Jewish community offers a case-study that other cities around the world should aim to emulate in its inclusivity, irresistible urge to welcome, and the success it has produced in ensuring a home for all Jews. None need to feel like Choni the Circle-maker in Baltimore.

About the Author
Jake Campbell is the Assistant Director of Hillel at Towson University. He was previously the Executive Director of the Australasian Union of Jewish Students, the Jewish Student Life Coordinator and Ezra Fellow of Hillel at Florida State University and a founding resident of Moishe House Sydney. Before making the switch to Jewish Higher Education and Nonprofits, Jake worked in a corporate higher education company as a team leader of the mentor department and previous to that was a high school English and History teacher.
Comments