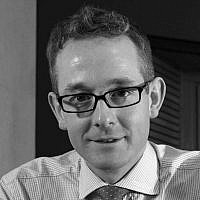 The Blogs
John Lamont
Apply for a Blog
Please note that the posts on The Blogs are contributed by third parties. The opinions, facts and any media content in them are presented solely by the authors, and neither The Times of Israel nor its partners assume any responsibility for them. Please contact us in case of abuse. In case of abuse,
Report this post.

There are certain experiences in one’s life that are simply unforgettable. Sitting in my tartan covered hotel room at a former Church of Scotland hospital overlooking the spectacular Sea of Galilee certainly falls into that category.

Last week I had the pleasure of leading a delegation of nine Conservative Members of the Scottish Parliament to Israel on a whirlwind visit co-ordinated by Conservative Friends of Israel.

In Tel Aviv, we discovered Israel’s booming start-up scene, and saw how Israeli charity Save A Child’s Heart offers free life-saving heart surgery to children in the Palestinian Territories and the developing world. Standing on the Syrian border, we listened in horror to the sounds of explosions from the brutal civil war tearing the country apart, while we saw Hezbollah’s flags flying mere metres away from Israel in southern Lebanon. In Jerusalem, we celebrated Israel’s democracy in meetings with cross-party Knesset members, and wandered the historic streets of the Old City.

In the West Bank, we saw a vision of a future Palestinian state at the new city of Rawabi, and learned of the growing support of a one-state solution – a concept that would mean the end of the Jewish state.

Despite our incredibly varied itinerary, there was one constant throughout the visit: the first word on everyone’s lips was ‘Brexit’. Israelis’ shared contempt for Jeremy Corbyn came a close second.

The message was clear: Israelis are uncertain what Brexit means for Israel, as well as the union back home. With the tumult of recent months following the EU referendum, it is important to tell the international community that the UK is open for business. The UK will be ever more outward-looking. Countries are lining up to sign free deals with the UK, including Israel. The current situation is undoubtedly challenging, but it should also be viewed as an exciting opportunity.

Much has been said about Scotland’s place within the UK following the EU referendum result. It is important to be clear that while some may suggest a contrary view, the Brexit result does not unpick the decision of Scots in 2014 when more than two million voted to remain part of the UK. Indeed, recent opinion polls suggest that if faced with a choice between remaining part of the EU single market or continuing in a strong United Kingdom, Scots want to remain in the UK.

The UK-Israel relationship is stronger than ever, but we must do everything we can as a government and party to take that relationship to even greater levels. That means more trade, scientific cooperation and cultural exchanges. It means challenging the anti-peace message of the so-called boycott, divestment and sanction (BDS) movement.

Scotland can play an important role in this. Following a lunch with the Israel-Britain Chamber of Commerce, we have pledged to look into the possibility of creating a new trade body in Scotland to work more closely with our Israeli partners. It means encouraging and enabling more Scots to visit Israel since only by visiting can one can truly appreciate all it has achieved in a mere 70 years.

These are not simply empty promises. Before even leaving the country, the delegation had sent a joint letter to each airline that flies between the UK and Israel to encourage them to explore the viability of operating a route between Scotland and Israel. This would enable all Scots to visit the Jewish state and see what a fantastically vibrant and exciting country it is.

The narrative of debate around Israel in Scotland has for too long been dominated by a vocal and hardline minority of anti-Israel activists.

They are simply not representative of the vast majority of Scots. Sadly, there was a perception in Israel that Scotland is a hub of BDS and Israelis are not welcome in the country. A concerted effort is needed to challenge this misguided view.

We’ve started to see a change recently. Not only have pro-Israel organisations – both regional and Christian – started springing up across the country but earlier this year we saw the first pro-Israel debate in the Scottish Parliament since its creation in 1999. Talks are underway to establish a cross-party Scotland-Israel friendship group.

I look forward to encouraging more of my colleagues, including my party leader Ruth Davidson MSP, to visit Israel in the coming years.

A page has been turned and we are determined to change Israel’s perception of Scotland by building a positive and steadfast relationship.