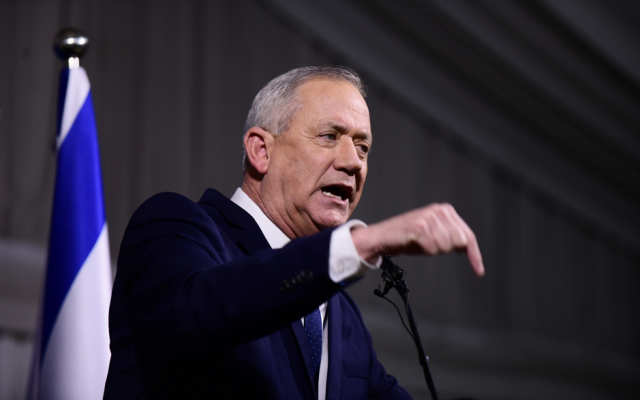 Among disappointed former Blue and White supporters, the most common expression of disenchantment is that Benny Gantz is not a sufficiently devious politician. The prevailing critique is that when faced with the chronic dishonesty, duplicity and cunning of Bibi Netanyahu, being a nice guy was not enough.

The truth is that a growing number of political commentators are beginning to acknowledge that Gantz’s ingenious style and substantive honesty have actually been more effective than the cynical picture initially painted by the press and political rivals. If we apply concrete results as a criterion for political effectiveness – Gantz actually deserves high grades. Here’s an abbreviated list for the naysayers to consider:

Netanyahu still does not enjoy legal immunity and his trial continues; the Supreme Court’s authorities remained intact; hundreds of professional judges have been appointed; Gantz’s intervention with the US maintained Israel’s strategic military advantage; unilateral annexation is off the table for now; irresponsible distribution of public funds as Corona compensation to high-income recipients was prevented.

There are several dozen more points one could add. But the bottom line is this: A year ago, only one thing stood in the way of an extreme-right, ultra-Orthodox government, and that was Benny Gantz. He made the most difficult decision of his life, and it was clearly the right one for the country.

This past Saturday morning, as I sat at Shabbat services, enjoying the weather outside our Masorti synagogue, I got to thinking about where this election campaign is going. During the Torah chanting, I found some needed clarity.

For me, Blue and White’s impressive list of achievements is not the real story. Ultimately, voting has as much to do with the heart as with the head. It comes down to supporting the kind of person you want leading the country. And just then, there it was in the Ki Tisa portion I was hearing — probably my favorite line in the book of Exodus. The message jumped out at me and made some sense of these musings.

As a kid, I grew up surrounded by Bible stories. When it comes to leadership, these legends appear to offer the qualities you expect from a role model. In today’s world, it probably is not a conventional one. Indeed, when you consider objective qualities, our Moses is an unlikely hero. We’re talking about a guy who stutters, who chronically suffers from a sense of inadequacy, has an irrepressible temper, and is constantly ambivalent about power. So why was he so effective?

My guess is that notwithstanding the criticisms they had, the children of Israel knew their leader always put their interests first. In Ki Tisah, we read that Moses explodes in fury when he descends from the mountain and witnesses the Israelites’ debauchery, worshiping a Golden Calf they created in his absence. But then, a few passages later, after reporting the people’s moral lapse to the Almighty, he becomes positively aggressive: Yes, we have a problem, but nonetheless, “if you will not forgive their sin – then just erase me from your book.”

If I were to assign this response a metaphor, I’d probably go with the cliché of a soldier who “falls on a grenade” to save those around him. Here’s a leader, with the insane notion that he can negotiate with the Almighty. It seems to be almost a suicidal tactic. But despite his own heartbreak and indignation at the people’s follies, Moses doesn’t think twice. He does the right thing by the nation.

Before I ran with Blue and White for yet a fourth time as a candidate I thought long and hard about whether this still was the best choice for the country. So many folks were jumping ship, trying to find passage on a safer political party – one with better numbers in the polls. The newspapers were chock-full of derision. But I opted to think for myself.

The truth is that I really don’t want a leader who makes decisions based on popularity. Ben Gurion always said, “I don’t know what the nation wants – I know what it needs.” And I believe most citizens can agree that nobody needed a fourth election back in March 2020, when the winds of pandemic were beginning to rage and the economy was crashing. The alternative was far worse. Netanyahu and his ultra-Orthodox, ultra-right collation were set to grab a narrow majority and take the country down some very dark roads.

So, Benny Gantz did the right thing – fully cognizant that by making a coalition agreement with his unscrupulous adversary, he would forfeit his enormous approval levels and fall from grace. Gantz also fell on the proverbial grenade to make sure our country didn’t get hijacked.

Today, the dangers we face have hardly changed. In April, without Blue and White in the Knesset, the emerging nightmare scenario is ominous. Netanyahu fires their ministers and takes advantage of the interim period to eviscerate the legal system and ensure his immunity from continued prosecution. To gain support for this, there is no telling how outrageous the concessions to his extremist partners will be. Alternatively, he will simply obfuscate and drag the country into a fifth election. In the absence of a reasonable election return for Blue and White, either scenario spells disaster.

I teach public policy for a living. Among the first things you want to do in designing an effective strategy is make sure to reward people for doing the “right thing.” Once the public comes to believe that it pays to do the “wrong thing” – implementation will invariably collapse.

When we think about our next government, I believe we must embrace leaders who do the right thing, even when it involves disappointing some voters. Quite simply, we need leaders who put Israel first.