One of the most troubling aspects about the Arab-Israeli conflict is how self-described peacemaking institutions have engaged in the ugly propaganda war against the Jewish State. Christian non-profits are some of the worst offenders.

World Vision, a multibillion-dollar charity supported by Christians from countries throughout the globe, has a long history of condemning Israel and singling it out for criticism. But while it has repeatedly condemned Israel, it offers hardly a word of criticism at the Jewish state’s Muslim and Arab adversaries in the Middle East.

It’s a shocking actually. The organization, which bills itself as a child welfare organization, remains mostly (but not entirely), silent about Hamas’ use of human shields during its wars with Israel and says nothing about the use of child labor in smuggling tunnels between the Gaza Strip and Egypt. Nor does it say anything about how Palestinian leaders have taught a generation of children to hate Jews. Those are crimes against children that World Vision simply cannot confront. It can confront the use of child labor in mines in the Congo, but not in tunnels in the Gaza Strip.

Another example: World Vision’s Affiliate in the United States published an article about Armenia that highlights the suffering Armenians endured under Communist rule, but makes no mention of the genocide perpetrated by the Young Turks, the founders of the modern state of Turkey between 1915 and 1922.

Apparently, it’s safe to offend the Jews with constant and harassing criticism of their homeland, but Hamas and Turkey, well that’s another matter. You don’t want to mess with them. World Vision staffers in the Middle East might get killed if the organization starts talking about the misdeeds of Arab and Muslim rulers. So they stay quiet.

Great Britain offers another example with “Embrace the Middle East. “This organization, which came to prominence in the early 1900s by assisting the victims of the Armenian Genocide regularly assails Israel with criticism, but is not so forthcoming or vociferous when confronted with human rights abuses perpetrated against Christians by Muslim extremists in the Middle East. In particular the organization’s leader, Jeremy Moodey is quick to condemn Israel for knocking down trees in the West Bank, but good luck finding similarly harsh criticism of Hamas in his writings. With the story of Israeli villainy, he tells, Moodey obliquely condones violence against Israel.

These one-sided condemnations, from Christian charities no less, hinder the cause of peace and human rights in the Middle East. If life is to improve in the region, Arab and Muslim leaders will need to change their ways of thinking and acting in a big way. But if Christian peacemakers remain silent about the changes that Arab and Muslim leaders need to make in the societies they govern while condemning Israel left right and center (which is what they do), they give people reason to think all the suffering in the region is the fault of the Jews and their state. It also gives Muslim and Arab leaders reason to think they can continue to point the finger of blame at Israel to distract their people and the rest of the world from their own misdeeds. The moral confusion sown by Christian charities and non-profits is simply a disgrace.

The phenomenon manifested itself in an article published on “Lapidomedia,” a news site operated by the Centre for Religious Literacy in World Affairs. In an article published on Oct. 28, 2015, Lapidomedia declares that Israel is “shunning” a peace studies program run by Bethlehem Bible College in the West Bank. Lapidomedia reports “The Arab world’s first Master’s degree in Peace Studies — developed by a Bethlehem college — is getting the brush-off from a government whose commitment to peace is already being questioned from within the Jewish world.”

According to the article, Israel is giving this so-called peace program the brush-off by not giving its students the visas they need to attend classes at the college. As a result, one student from Canada is violating Israeli law by entering the West Bank with a tourist visa and using this visa to attend classes at the school. Aside from giving an interview to Lapidomedia (under an assumed name) the student is keeping a low profile on the Internet.

“My fear is maybe they would become aware of what I’m doing and reject any subsequent tourist visas,” the student said.

A close read of the article indicates, however, that the student in question did not even apply for the visa in question because officials at the school told him “not even to try.” So the entire article’s premise — that Israel is “shunning” the peace program at Bethlehem Bible College is based on pure conjecture that Israel would deny the student the visa he needs to study at the school. The failure of Israel to give an unnamed student a visa he never applied for is the only real bit of evidence that the Jewish state is “shunning” Bethlehem Bible College’s peace program.

The article also fails to mention that Bethlehem Bible College is Dhimmi Central in the West Bank. Dhimmi, as readers should know, is the term used to describe non-Muslims, Christians and Jews especially, who live as beleaguered minorities in Muslim-majority environments and as a result, must behave in a submissive manner toward the rulers of these areas in order to practice their non-Muslim faith.

If you listen to Palestinian Christians closely you’ll very rarely hear them condemn radical Muslims by name for the terrible things they say about Jews. In 2012, for example, Mufti Muhammad Hussein, a prominent imam affiliated with the Palestinian Authority, declared, “Muslims’ destiny is to kill Jews. Resurrection will come only after Jews are killed by Muslims.” Good luck finding evidence of the folks at Bethlehem Bible College issuing a statement condemning this type of hate speech. They will, however, get an article in “Lapedomedia” beating up on Israel

If the folks at Bethlehem Bible College were serious about being “peacemakers” they would publicly demonstrate against PA and Hamas-sponsored anti-Semitism in Palestinian society. Israelis condemn their leaders all the time. Groups like B’Tselem protest in favor of Palestinian rights. Gish, another organization in Israel, does the same thing. Israel is filled with NGOs that advocate for “the other” in Israeli society. The Christians at Bethlehem Bible College rely on Jewish self-criticism to make their case against Israel to Westerners, but in the main, do not engage in the same rhetoric against their own leaders.

The reason is simple. It’s safe for Palestinian Christians to condemn Israel to their co-religionists in the West, because to do so affirms their value to the Palestinian cause. And that’s what the Christians at Bethlehem Bible College do. They organize “Christ at the Checkpoint” conferences held every two years at their school.

The security barrier is condemned regularly at these conferences, but the anti-Israel incitement? No so much. It’s understandable. If it’s not safe for well-connected international charities like World Vision to speak about the misdeeds of Arab and Muslim leaders in the Middle East, just imagine how difficult it would be for Palestinian Christians to condemn them. 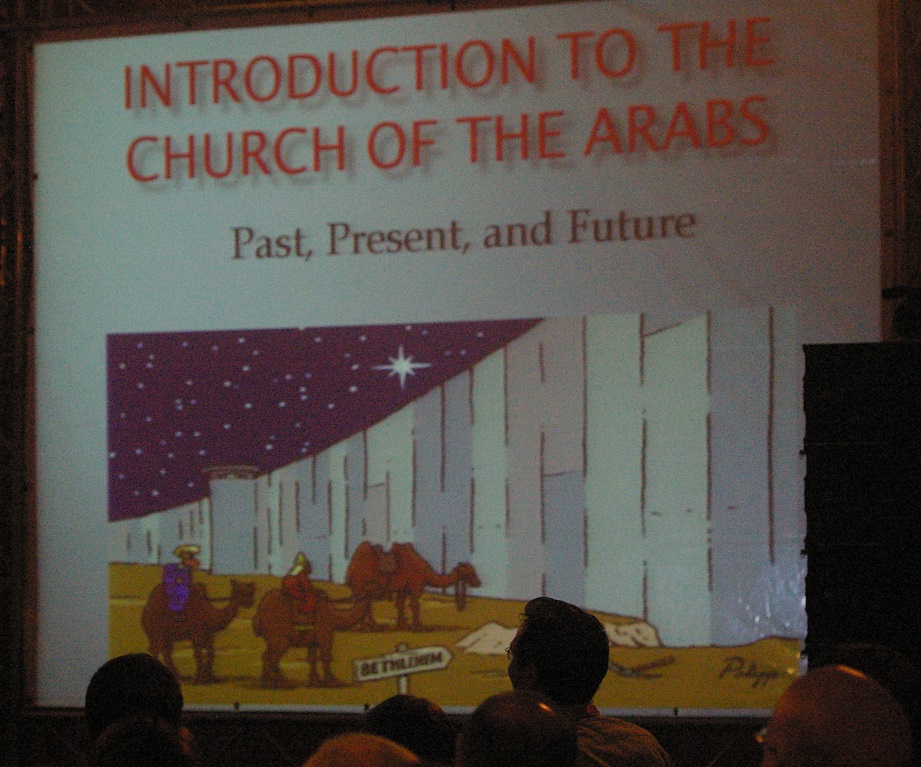 During the 2014 Christ at the Checkpoint Conference, Yohanna Katanacho, Academic Dean for Bethlehem Bible College, displayed this cartoon of the Three Wise Men being prevented from visiting the Baby Jesus in Bethlehem by the security barrier Israel built to stop suicide bombers. (Dexter Van Zile)

Nevertheless, Christians who want peace need to condemn Mahmoud Abbas for inveighing against Jews and their “filthy feet” on the Temple Mount, because language like this only adds fuel to the fire. The problem is, the dhimmis who work at Bethlehem Bible College rely on the Abbas-led Palestinian Authority for their safety and well-being, just as Christians in Iraq relied on Saddam Hussein to protect them and Christians in Syria relied on the Assad family for protection. 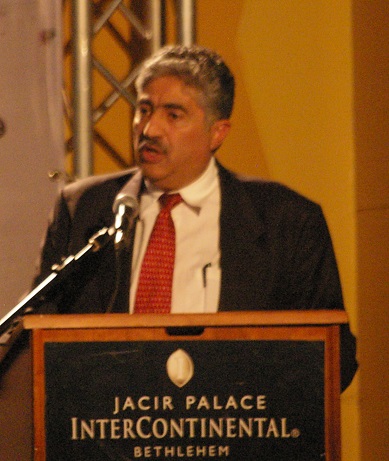 PA President Mahmoud Abbas has lionized Palestinians who have stabbed Israeli Jews in cold blood and he’s done this to garner support on the Palestinian “street.” And still Kuttab tries to tell us that, (a) there’s a lot of support for non-violence in Palestinian society and (b) Abbas hasn’t been aggressive enough with Israel.

Is this some sort of joke? With his quote, Kuttab sidesteps the issue of incitement in Palestinian society and gives Abbas leave to let the violence continue. This is not “peacemaking.”

It is however, what we should expect from the folks affiliated with Bethlehem Bible College. Because of their precarious position in the Muslim-majority Palestinian society, the Christians who run the school simply lack the ability to forcefully confront their countrymen about the obstacles to peace in their society.

They can’t speak vociferously about the failings of the Palestinian Authority and as a result, can’t honestly be described as running a peace center. The school makes gestures of criticism for the benefit of its supporters in the West, but as far as being a force for real reform in Palestinian society, fat chance.

In sum, Bethlehem Bible College is a center for anti-Israel propaganda in the West Bank that serves the interests of the Palestinian Authority. And it masks its status as a front for the PA by calling itself a force for peace. And the folks at the ironically named Centre for Religious Literacy took the bait hook, line and sinker.