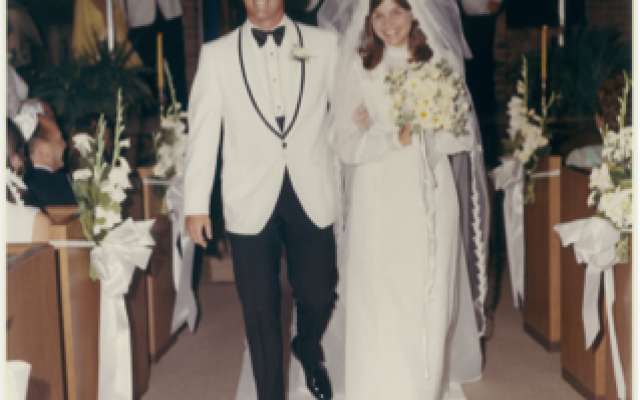 It was hot and muggy, New Jersey in August.

You could slice the air with a knife, as the saying goes.

The sky was overcast, and it smelled like rain.

Maybe a thunderstorm would break the heat, light up the night.

And scuttle cocktails on the patio, and leave my hair flat, my make-up streaked, my underarms damp.

And I was on my way to get married.

My mom reminded me that it was good luck if it rained on my wedding night. It had poured on hers, and look at them, my mom and dad, married almost three decades and counting.

Look at them, indeed.

But we were just kids, crazy kids, in love.

What did we really know about marriage, or even love for that matter?

All we knew was that we wanted to be together, and getting married was the next step.

Especially in those days, the late 1960s, when college dorms were single sex, when girls had to be in by midnight, when male visitors — only on Sunday afternoons for parietal visits as they called them — were allowed in their rooms, doors open, both feet on the floor.

The pill may have arrived in 1960, and there were girls who snuck down to Planned Parenthood with fake prescriptions, but not us.

Not the girls who followed the rules, who had to get parental permission for an overnight stay, whose fathers were committed to protecting their precious daughters’ virginity, lest some handsome lothario attempted to lead them astray.

We were following the path that our parents had laid out for us, finish college, get a job, marry young, start a family. Then I’d stay at home with the kids while my hard working husband went out into the world to provide for us, and we’d live happily ever after.

There were conventions that guided our choices, that mapped out lives that followed a familiar course. And there was a comfort in that surety, even as the rumblings of the outside world, the women’s libbers, the anti war protesters, the civil rights marchers, the violence on the campus and on the streets, grew louder and the winds for change began to blow.

And while our lives spooled out against that backdrop, and we too changed as we grew, the traditional values that guided us from the beginning provided a bulwark for navigating those changing times then, and now.

So I’m thinking about it this year as we mark 50 plus one years since that muggy day, as the country again is in turmoil, as race and class roil its waters, complicated by a deadly virus and a devastated economy and a dearth of leadership. Thousands are dying and thousands more suffering from want and need as the country struggles to find its way.

And yet, then, as now, the serendipity of falling in love, of pledging to make a life together, and, yes, even taking the leap of faith to bring new life into this world, astounds.

Perhaps it was — and is — the ultimate sign of hope for the future and faith that a better world will come. Not only if we will it, but if we work towards making it so, one person, one couple, one family at a time.

So it was on that hot and humid night so many years ago that the troth we so innocently pledged to each other for better or for worse, richer or poorer, in sickness and in health, to love and to cherish, still holds true.

Even in a pandemic, or especially in a pandemic. As we hunker down at home in this great country and find new ways to put our lives together with meaning and purpose, and love, yes, love.

Then, and now, we’re better, together.