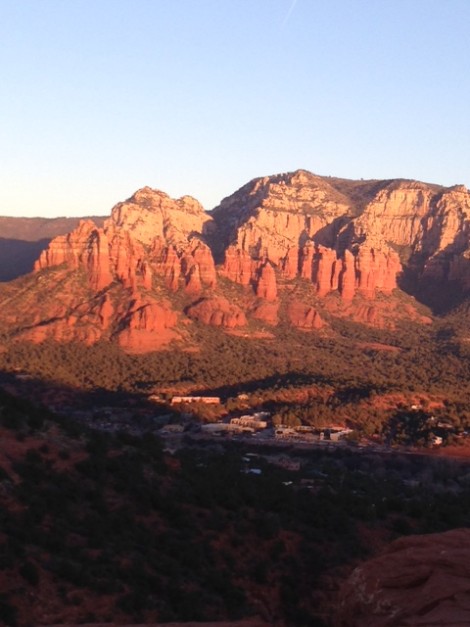 In the late eighties we spent a sabbatical in Tucson Arizona. Driving from snowy Iowa City in late December, to a place where the sun was shining on the colorful mountains and the air smelt of citrus blooming, I felt like I had reached paradise.

During that semester we did a lot of travelling in the Southwest. We were especially impressed with the magnificent formations and the different colors of the mountains. One favorite destination was Red Rock Canyon in Northern Arizona, where we stayed in Sedona, the quaint town by the Canyon.

A year later when we returned to Israel, we drove one  afternoon to Mizpe Ramon (Ramon Observation Point) on the rim of the Ramon Crater, and were struck by the beauty of the place. The sunset in the desert  mountains conjured up images of the beautiful Southwest, and we decided at that moment to buy a house in Mizpe Ramon. The opportunity presented itself some weeks later and within two months we were already at our new home in Mitzpe Ramon

Sedona, a remote town two hours away from Phoenix, began to develop in the 1950s, and was built as a tourist destination, vacation-home and retirement center. In contrast, Mizpe Ramon, in spite of the beauty of the crater, was never intended to be a tourist town.

Mizpe Ramon  also developed in the 1950s when the first settlers came to that faraway post to build  the road to Eilat. In the 60s new immigrants were brought there from North Africa, in an attempt to populate the Negev. During  the 70s a group of Americans, the Hebraic Blacks, arrived to  Mitzpe Ramon from Chicago. There were also  new immigrants from the former Soviet Union, and later on came the artists, and the nature lovers who wanted to escape city life.

Few days ago I was back in Sedona for the first time in many years, and was envious to see how much the town has developed. There are numerous hotels, shops, restaurants, and even an outlet mall.  Many locals are not pleased with those changes and dislike the fact that their town has become much more commercialized. Yet, no one denies that the town is thriving.

There were some changes in Mizpe Ramon as well. In 2011 Bereshit, the most expensive resort hotel in Israel, was built on the rim of the Ramon crater. Guests in that hotel spend more than $1000.00 a night to sit on their balconies and watch this natural wonder. However, so far, even this development has not affected the sleepy Mizpe Ramon..

If you ask around in Mizpe Ramon, many locals would say that they do not wish their town to change; this is exactly what they had been looking for when they left the big city for the serenity of the desert mountains. Yet, other people complain about a very high unemployment rate and the lack of opportunities for the residents.

Whenever I tell people about my house in Mizpe Ramon, they say that I am very fortunate to have a home in such a beautiful place, but usually they add that it’s a pity that nothing has been done here.

Unfulfilled potential often causes disappointment– a feeling of opportunities missed. Mitzpe Ramon is a classic case of unfulfilled potential: it is a small, poor town next to one of the most spectacular natural formations on earth.

There is no reason why Mitzpe Ramon would not become another Sedona. But  we must  believe in our beautiful crater and allocate the necessary resources in order to make it happen..